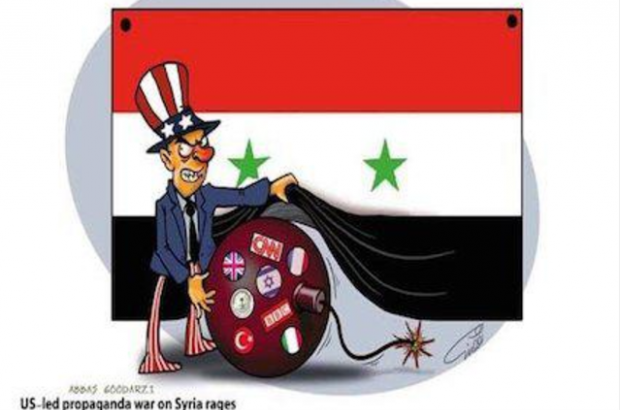 When It Comes To U.S. Foreign Policy, The Truth Hurts

A bill before Congress could be used to target “any website, or blog, that does not share the mainstream media’s proclivity to serve as the Public Relations arm of a given administration.“ All they have to do is claim it is being “manipulated” by the Russians. But, Moscow doesn’t have to lie to counter a lawless U.S. foreign policy. “The Russians only need to stick to the facts (omitting the pipeline) to ultimately win the propaganda war.”

“The USA governing elite is sowing ever deepening dissent in the psyche of those Americans actually inclined to think, understand and know for themselves what is actually going on.”

Why is the USA media, intelligence agencies and Congress in hysteria over “Russian propaganda”? Because the Russians have, for quite some time, had the absolute upper hand in the growing field of alternative media. How is that?

What the Russians appear to have clearly recognized is how to take advantage of the corrupt nature of the western “mainstream” press, an institution which has been co-opted by western intelligence agencies for a very long time.

The disadvantage NATO has faced in this competition is Syria controlled by a Russian ally, that is, the government of Basher al-Assad.

Because NATO sponsored Salafist militants to effect “regime change” (the preferred NATO model since 1980s Afghanistan), a large number had, not surprisingly, gone out of control (e.g. Islamic State is a direct result.) Paradoxically, NATO-aligned states have pitched the anti-Assad endeavor in terms of a “war on terror,” and there are so many NATO lies (and lies to cover lies) in the co-opted western media, the Russians only need to stick to the facts (omitting the pipeline) to ultimately win the propaganda war. What’s more is, Russia further only need stand back and allow western dissident journalists to dig up the real facts on the ground:

Depending on the geopolitical reality of the day, for instance whether the paranoid ego-maniac Sultan Erdogan of Turkey is behaving well or not, the stories by western dissident journalists that will withstand close scrutiny are run in Russian or Russia friendly media outlets. The result? Odds are 100:1 you’ll get more reliable information from Russian state TV or Russian sponsored websites than from ABC, CBS, CNN or NBC.

At the end of the day, the only solution NATO’s main sponsor, the USA, can come up with to protect it’s colossal efforts to deceive and manipulate the western public is to silence dissident journalists by cutting off access to alternative media. Zerohedge on the present proposal:

“On November 30, one week after the Washington Post launched its witch hunt against “Russian propaganda fake news”, with 390 votes for, the House quietly passed “H.R. 6393, Intelligence Authorization Act for Fiscal Year 2017“, sponsored by California Republican Devin Nunes (whose third largest donor in 2016 is Google parent Alphabet, Inc), a bill which deals with a number of intelligence-related issues, including Russian propaganda, or what the government calls propaganda, and hints at a potential crackdown on “offenders.”

“A quick skim of the bill reveals “Title V—Matters relating to foreign countries,” whose Section 501 calls for the government to “counter active measures by Russia to exert covert influence … carried out in coordination with, or at the behest of, political leaders or the security services of the Russian Federation and the role of the Russian Federation has been hidden or not acknowledged publicly.”

“The section lists the following definitions of media manipulation:

* Establishment or funding of a front group.

“As ActivistPost correctly notes, it is easy to see how this law, if passed by the Senate and signed by the president, could be used to target, threaten, or eliminate so-called “fake news” websites, a list which has been used to arbitrarily define any website, or blog, that does not share the mainstream media’s proclivity to serve as the Public Relations arm of a given administration“

The reactionary moves by the NATO/USA propagandists to having been bested in the game by Russia only sweetens the Russian victory. Similar to Erdogan’s over-reaction in cracking down on anyone who doesn’t follow the ruling party line in Turkey, the USA governing elite is sowing ever deepening dissent in the psyche of those Americans actually inclined to think, understand and know for themselves what is actually going on. The sort of reactionary behavior embodied in the color of law [anti-constitutional order represented in the “national security state”] governing the United States and its allies destabilizes any society.

The USA media mouthpieces are not going to broadcast the American propaganda budget, so let’s turn to Russia’s Sputnik to get the facts:

“Last year, the Broadcasting Board of Governors (BBG), the US federal agency responsible for Voice of America and Radio Liberty/Radio Free Europe, among others, requested a substantial budget increase. Seeking a boost of $30 million, the BBG’s budget soared to $751.5 million.

“That was, evidently, not enough money. President Obama’s newly proposed budget for fiscal year 2017 proposes another massive increase in spending for the BBG. If granted, the agency will receive nearly $778 million, a roughly $27 million increase” [over the $30 million boost]

The Russians are willing to broadcast the factual news the USA’s intelligence agency co-opted media mouth-pieces will not. Point made?

How much of the USA’s propaganda budget is actually aimed at Americans?

The newest version of the National Defense Authorization Act (NDAA) includes an amendment that would legalize the use of propaganda on the American public, reports Michael Hastings of BuzzFeed.

The amendment — proposed by Mac Thornberry (R-Texas) and Adam Smith (D-Wash.) and passed in the House last Friday afternoon — would effectively nullify the Smith-Mundt Act of 1948, which explicitly forbids information and psychological operations aimed at influencing U.S. public opinion

Huh. And yeah, that was made into law.

Glenn Greenwald’s related, and otherwise excellent piece ‘Washington Post Disgracefully Promotes a McCarthyite Blacklist From a New, Hidden, and Very Shady Group‘ throws a bone to one of the very worst propaganda prostitutes extant on the world-wide-web: Elliot Higgins of Bellingcat. WTF.