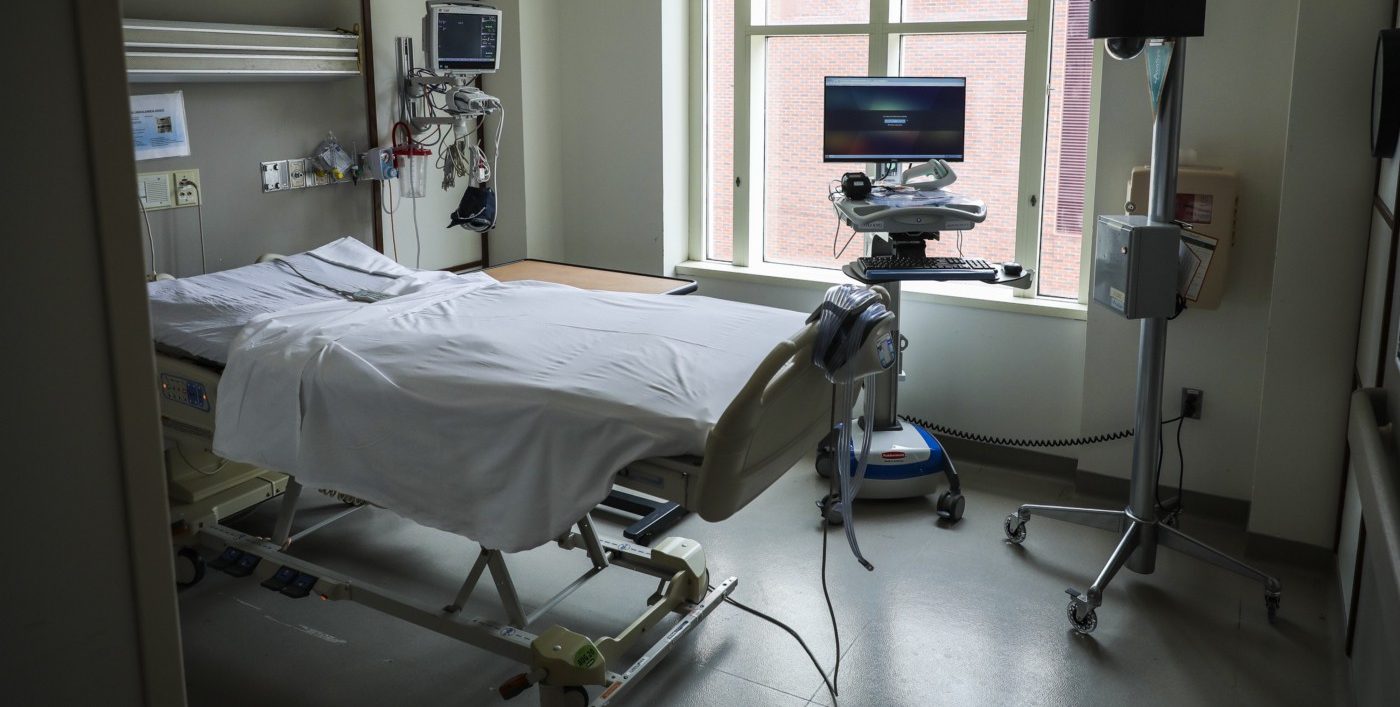 When This War Is Over, Many Of Us Will Leave Medicine

NOTE: The reality is that many health professionals in the United States have already left medicine. At least, they have left direct patient care for one of the many administrative positions that exist in our highly bureaucratic and complex market-driven system.

Even before the pandemic, the healthcare system in the United States was broken. Physician burnout was rising and a new term entered the field, “moral injury,” a term typically reserved for soldiers in the military. How long can one last in a system that runs counter to everything you were trained to do – to provide care to patients?

So many changes need to be made right now, and as soon as we realize they aren’t going to be made unless we make them and that we have the power to make them, we can get to the work of creating a society that supports life instead of allowing the making of profits in a system that is designed to extinguish life, whether directly or indirectly.  – MF

One ER physician recounts the stress of constant intubations and PPE shortages.

I couldn’t see. My face shield was blurred by a streaky haze. I tilted my neck back and forth in an effort to peer beyond it, beneath it, through it, whatever might work. Was it condensation? I started to raise my hands to my face to wipe it away before I remembered and yanked them back down: I cannot touch my face, can’t ever touch my face — neither inside this room nor outside it.

As I stood at the head of the patient’s bed in ER Room 3, her nurse, Kate, secured a mask over the patient’s face to deliver additional oxygen. I checked to ensure the oxygen was cranked up to the maximum flow rate while we waited for the respiratory therapist. Even with that increased oxygen, the patient was saturating 85% at best, and her blood pressure was dropping.

Ninety minutes earlier, the patient — a woman of 68 years with significant impairment from a stroke — had been fine. The nurse at her nursing home called to inform us they were sending the patient to the ER for evaluation of “altered mental status” because she was less “perky” than usual. Her oxygen level on arrival was normal with no shortness of breath. Her blood pressure was a little low, but her blood glucose read high. Nothing a little IV fluid couldn’t fix, and initially, it did.

I had requested a rectal temperature; it read 103 degrees. The combination of her being a nursing home resident and running a fever was a red flag during these coronavirus times. I placed her on respiratory isolation and asked Kate to be extra vigilant for any decline. I ordered broad-spectrum antibiotics to kill any likely source of infection while I awaited her chest X-ray, urine, and blood tests. Her portable chest X-ray was done first and revealed what I had already anticipated: diffuse atypical infiltrates, a presumed telltale sign of Covid-19. Although our understanding of this viral infection is ever-evolving, it seems the only observation we can reliably conclude is that we have not yet identified anything pathognomonic about it.

Seventy-five minutes later, another nurse, Charlene, called, “They need you in Room 3.”

“Okay,” I replied as I entered orders on the next chest pain patient with shortness of breath.

“Room 3? The nursing home patient? I’ll be right there. What happened?”

I asked the clerk to call respiratory therapy for intubation. I then turned back to Charlene to ask her to help Kate prepare for the procedure.

Then the personal protective equipment (PPE) sequence. I grabbed gloves to remove my N95 mask from its paper bag and placed it over my face, checking it was snug over my nose and lower jaw. After removing those gloves, I donned my face shield, then walked to the cart for a new gown. Lastly, a fresh set of gloves before entering the patient’s room.

Now I waited for the respiratory therapist. It was good that she needed extra time to get the ventilator and then don her PPE because I had to figure out why I couldn’t see without manually manipulating my face shield. My thoughts were pierced by the sound of panting. I checked the patient who was taking the oxygen quietly, rapidly, ineffectively at regular intervals that didn’t register a sound. Her eyes remained closed—no flip of an eyelash, no wince of her forehead, no twitch in a limb. Despite her instability, the patient was in no visible distress. No heaving breath there. The nurse to my left was concentrating on the patient’s oxygen. I heard only the crinkle of her gown as she adjusted her stance. The panting wasn’t hers. The nurse to my right prepared to administer the intubation medications. He read out my orders — the name and dose of the medication in each syringe and the order in which they were to be pushed. His voice was steady. It wasn’t him hyperventilating. The nurse just outside of the room kept documentation of the procedure on scrap paper she used to carefully transcribe each detail onto her laptop. She was too far away to be heard unless she yelled, so that audible breathing certainly wasn’t hers.

The panting was my own.

A hailstorm of thoughts ensued. Was my breath the fog on my face shield? If so, my N95 mask had a leak. Unsuspecting, had I already inhaled the virus? Would I be intubated next?

The respiratory therapist had arrived with the ventilator and put on her face shield. She was almost ready, so there was little time to pull myself together.

Was I already short of breath? Had I not noticed my symptoms when I drove to work this morning? Yesterday? Last night?

Breathe in. One two, three. Breathe out. One, two, three, four.

I was scared, and I don’t get scared. Other doctors do, but not ER doctors. We don’t scare easily. We’re a type of special forces who step in when everything else has failed. Typically, we do our job anonymously then leave when the mission is complete. Any injury to ourselves incurred in the line of duty is dealt with after we’re off the clock.

Once in a while, however, there are circumstances when the capacity to compartmentalize is overwhelmed, when the chronic stress breaks through so that the fear works on you. Now, as I stood at the patient’s bed with the video laryngoscope blade in one hand and the endotracheal tube in the other, panic pushed its way through me in involuntary. forceful. rapid. shallow. breaths.

The respiratory therapist slapped on her gloves and in moments was at my side. It was time for intubation.

Breathe in on three and out on four.

At last, my breathing was smooth, measured, sound.

I looked through my mask again. It wasn’t condensation. It was streaks from the sanitizing wipes because we had to reuse our equipment.

I adjusted my eyes to the clear spaces. Finally I could see. My N95 mask fit. I could breathe.

The room was relatively quiet, what I like to call “ER calm.” All was still, save for the bagging of respiratory therapy, save for the swoosh of oxygen jetting from its port aerosolizing everything.

I requested that the intubation medications be administered then checked for a response. After visualizing the vocal cords easily with the video laryngoscope, I slid in the endotracheal tube, and respiratory connected it to the vent. The patient’s oxygen increased to 100% on the monitor.

Doffing my gown and gloves, I put on new gloves to remove and sanitize my face shield. I couldn’t imagine there was a way to effectively clean the foam band across the forehead. I hoped to remove the streaks. I also hoped the impossible: to remove the virus, because it was the same shield I had to use repeatedly during my shift. I took off the N95. We’re now told that we can reuse it, too, numerous times before getting a new one due to the PPE shortages, so I put the contaminated mask back in the bag until I would need to don it again for the next patient.

Those of us who survive will return each day to battle because we do not walk away from war until it’s done. But when this war is over, this is why many of us will leave.

I walked to the back of the ER to use the restroom in the seven minutes before the patient was ready for CT and saw my ER director standing in the lounge. I waved hello.

“How did it go?” she asked, her eyes gentle, her smile sympathetic.

I paused to regulate my answer. Her intentions were good. She was an ER doctor who did her best to walk the fine line between the docs on the front lines and the administrators who notified me that “doctors don’t get paid sick leave” and “thank you for your service,” which were graciously sent out in two separate emails. Just another reminder that we health care providers are regarded as more disposable than our PPE. But this wasn’t her fault, so I felt responsible, in that moment, for her feelings too.

I pulled in my tone. “No. That equipment doesn’t protect us. There’s no way that we’re not all covered in Covid, but we’re following the ‘guidelines.’”

She nodded and frowned.

“Honestly,” I continued, “and I hate to say this, but my feeling is that the majority of people will have contracted this virus. Most people will get through it, and others won’t. Many will die. I don’t want any of us to die, but many health care providers will. The thing is, it’s impossible to know which camp we’re in until it happens.”

We smiled at each other, and I continued to the bathroom. I washed my hands, turning them over each other, lathering the soap along each finger, under each nail. As I dried my hands, I looked up at the mirror, noting that my breath was now imperceptible when my phone rang.

A FaceTime request from my nine-year-old nephew, Eli.

My policy used to be to not answer the phone at work unless it was critical. But this is a different era. Eli is sheltering-in-place at a military base in California while his mother, my sister, is away for deployment.

I swiped the phone to answer. “Hi, Eli!”

“Hello, Aunt,” he announced more softly than usual. His eyelids hovered low, and his eyes weren’t their typical bright.

“How are you, Eli?” I inquired, masking my concern.

“I’m good.” He smiled with sleepy eyes. “I just woke up.” He yawned, his bushy eyebrows raised high. Years ago, he said his eyebrows were the indisputable evidence that Frida Kahlo was his great, great grandmother so he had to meet her forthwith. Upon being told that she had already passed away, he cried for the woman he had decided was his long-lost ancestor. Now, as he yawned again, his thick eyelashes shut tight. His head drifted back and his mouth reeled open expelling the strongest exhale of the bravest lion cub.

Today we are OK.

Michele Harper is an emergency room physician for more than a decade and author of the upcoming memoir, The Beauty in Breaking. For more information visit: micheleharper.com.