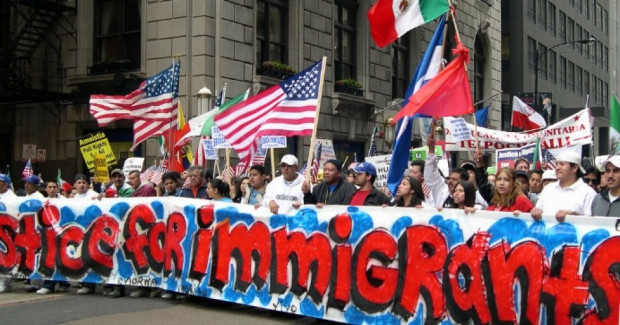 When Trump’s “Deportation Force” Comes For Us…

History Can Show Us How To Respond

The undocumented members of our communities are frightened. And for good reason. In his first day in office, President-elect Trump has vowed to reverse President Obama’s executive orders shielding certain undocumented people from deportation, to cancel federal funding to Sanctuary Cities, and to begin removing millions of “criminal illegal immigrants.” We can and must condemn these actions. But what can we actually do to protect our friends and neighbors? When he takes office on January 20, Donald trump will have the government’s immense law enforcement resources and the full weight of federal authority at his disposal to execute his anti- immigrant crusade.

For immigrants and their allies, it might seem pretty hopeless. But a review of American history reveals that this is not the first time that the federal government unleashed its forces to arrest and remove vulnerable people. And in these earlier episodes, even against the full force of the federal government, our forebears found a way to resist. And so can we. Particularly if we know our history.

From the founding of our nation until 1865, slavery was the law of the land. And the Constitution’s fugitive slave clause required the capture and return of runaway slaves. But antislavery activists constructed an Underground Railroad in direct violation of the law. And when, in 1850, the Federal government introduced a new, more far-reaching Fugitive Slave Act that required individual citizens anywhere in the country to assist in the capture and return of runaway slaves, many in Northern communities refused, even using violent force to defend the fugitives in their communities from arrest and removal back to slavery. Citizen enforcement of slavery was the law. But because it was an unjust law, these citizens refused to cooperate, and instead acted to defend those who illegally occupied their communities.

A more recent example comes from the 1980s, when another entertainer-turned- President was conducting his own assault on immigrants and refugees. The Reagan administration was targeting refugees from Central America. These were people who had escaped the deadly civil wars and U.S.-backed death squads of El Salvador and Guatemala, only to find themselves hunted down for detention and deportation in the United States. Determining that this amounted to an unjust and illegitimate use of federal authority, a group of activists created a modern-day underground railroad to transport and protect the refugees and migrants Reagan’s federal agents were hunting. Historian María Cristina García notes that thousands of Americans came together in this Sanctuary Movement to carry out “one of the most important acts of civil disobedience of the late twentieth century.”

Throughout our history, people of conscience have examined the actions of their government and sometimes decided that they had a moral responsibility to resist. In his classic 1849 statement on “Resistance to Civil Government,” Henry David Thoreau reminds us that justice sometimes requires disobedience to authority. “Under a government which imprisons any unjustly, the true place for a just man is also a prison,” Thoreau writes. “Cast your whole vote, not a strip of paper merely, but your whole influence. A minority is powerless while it conforms to the majority; it is not even minority then; but it is irresistible when it clogs by its whole weight.” This was the power of the civil disobedience of the abolitionists and the Sanctuary Movement. And once again, justice requires our disobedience, perhaps through a new Sanctuary Movement. Will we have the courage to resist when President Trump sends his “deportation force” to our communities?