Where Water Goes After Fracking Is Tied To Earthquake Risk

Above Photo: An aerial view of hydraulic fracturing operations across the Jonah field, a large natural gas field in Wyoming. EcoFlight

In addition to producing oil and gas, the energy industry produces a lot of water, about 10 barrels of water per barrel of oil on average. New research led by The University of Texas at Austin has found that where the produced water is stored underground influences the risk of induced earthquakes.

Beyond supporting the link between water disposal and induced seismicity, the research also describes factors that can help reduce earthquake risk.

“If we want to manage seismicity, we really need to understand the controls,” said lead author Bridget Scanlon, a senior research scientist at UT’s Bureau of Economic Geology.

The research was published Oct. 31 in the journal Seismological Research Letters. Co-authors include Matthew Weingarten, assistant professor at San Diego State University; Kyle Murray, adjunct professor at the University of Oklahoma; and Robert Reedy, research scientist associate at the Bureau of Economic Geology. The bureau is a research unit at the UT Jackson School of Geosciences. 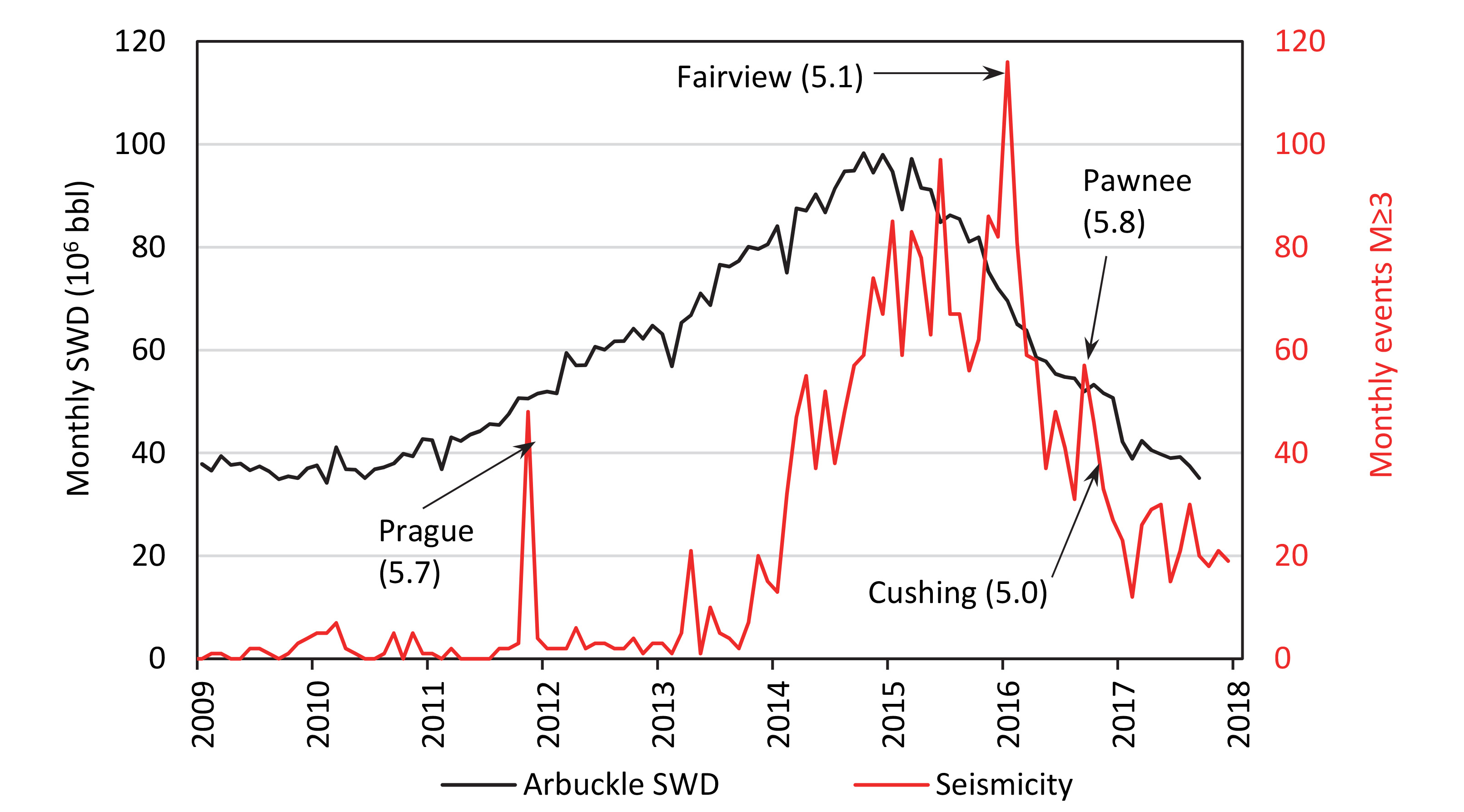 The researchers found that the increased pressure that is caused by storing produced water inside geologic formations raises the risk of induced seismicity. The risk increases with the volume of water injected, both at the well and regional scale, as well as the rate of injection.

The study reported that the different levels of induced seismic activity relate to, among other reasons, how the water is managed and where it is stored underground. In Oklahoma, the tendency to store water in deep geologic formations — which are often connected to faults that can trigger earthquakes when stressed — has increased the risk of induced seismicity. In the other areas, water is stored at shallower depths, which limits exposure to potentially risky faults.

In conventional energy production, water is usually injected back into the reservoir that produced the oil and gas, which stabilizes pressure within the reservoir. However, water produced during hydraulic fracturing—the method used to access energy in tight oil plays— cannot be returned because the rock pores are too small for the water to be injected back into the rock. That water is usually injected into nearby geologic formations, which can increase pressure on the surrounding rock. 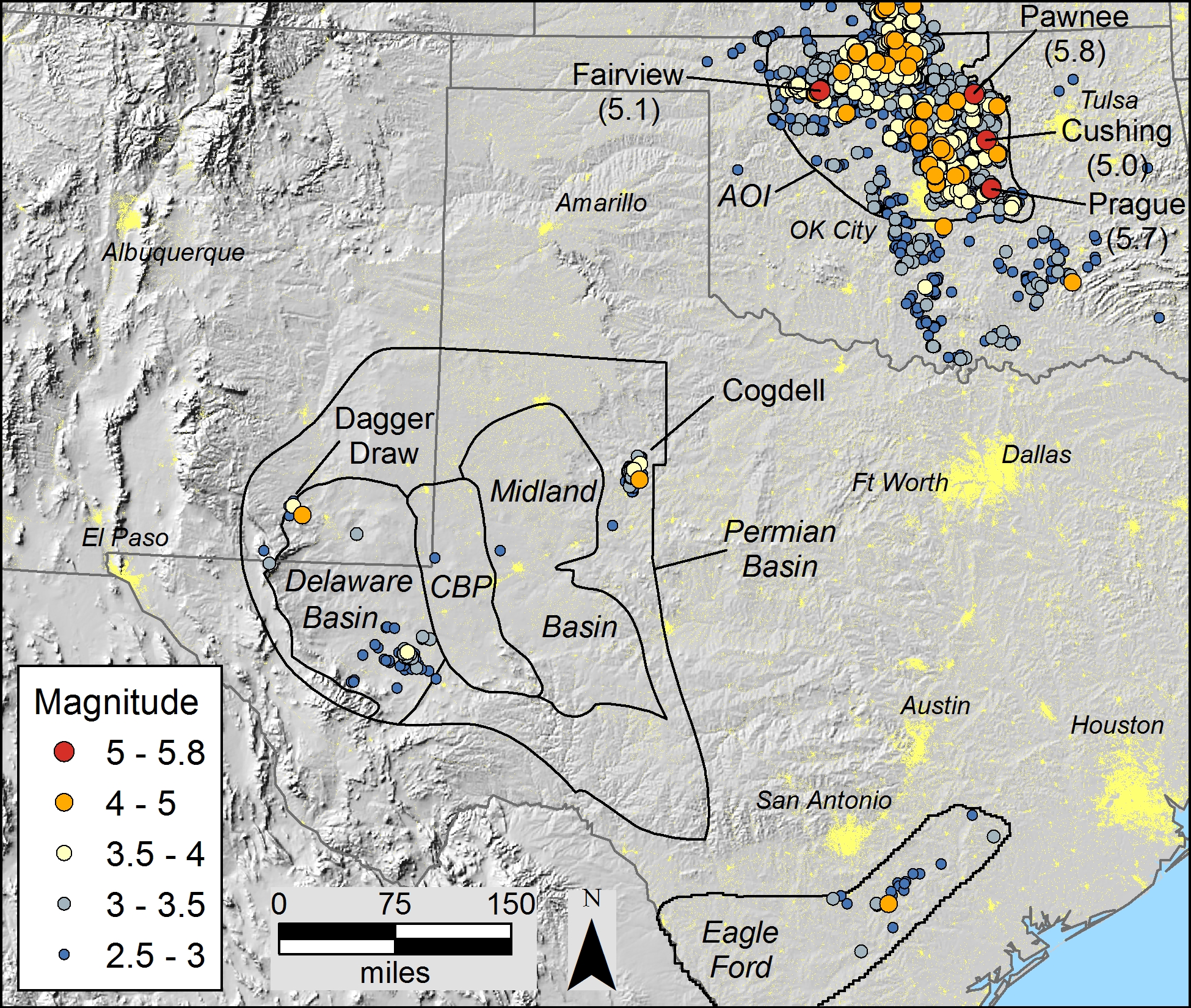 The findings are consistent with directives issued by the Oklahoma Corporation Commission (OCC) in 2015 to mitigate seismicity, which included reducing injection rates and regional injection volumes by 40 percent in deep wells. This study confirmed the changes resulted in a 70 percent reduction in the number of earthquakes over a 3.0 magnitude in 2017 compared with the peak year of 2015.

“Everything they (the OCC) did is supported by what we have in this article,” said Murray. “The decisions they made, the directives that they put out, are supported by statistical associations we found.”

The reduction in earthquakes in Oklahoma shows that subsurface management practices can influence seismic risk. However, Scanlon said the changes could come with trade-offs. For example, shallow disposal may help lower the risk of earthquakes, but the shallower storage depths could increase the risk of the produced water contaminating overlying aquifers.

“There’s no free lunch,” Scanlon said. “You keep iterating and doing things, but you must keep watching to see what’s happening.”

The study was funded by the Alfred P. Sloan Foundation, the Cynthia and George Mitchell Foundation, the Jackson School of Geosciences, and the Stanford Center for Induced and Triggered Seismicity.