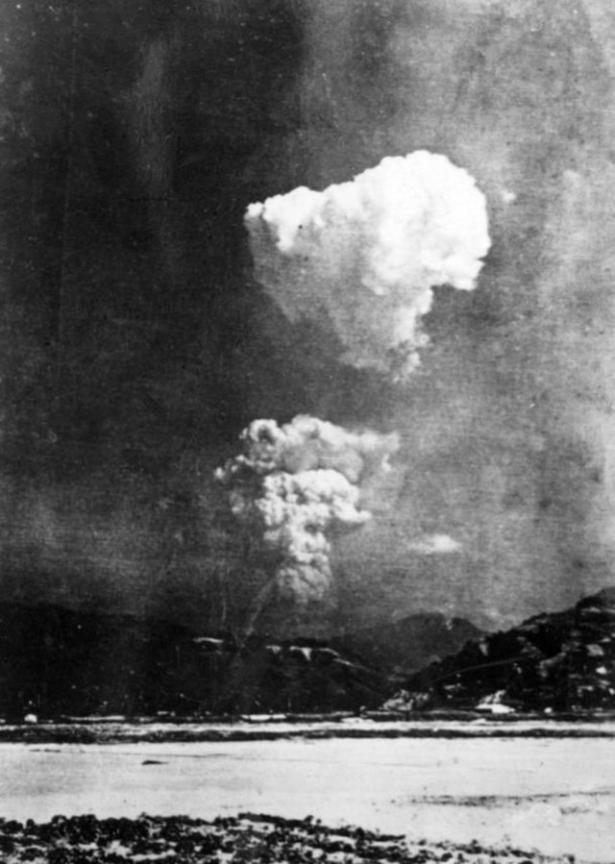 Above Photo: Picture found in Honkawa Elementary School in 2013 of the Hiroshima atom bomb cloud, believed to have been taken about 30 minutes after detonation of about 10km (6 miles) east of the hypocentre. public domain photo.

August 6 And 9 – 77 Years Since The First Atomic Bombs Were Dropped On Human Beings – By Our Government.

The Upgrading Of Nuclear Weapons By Nine Countries And Morbid Fantasy Of A Military Solution To The Russian-Ukraine Conflict Risk Life On Earth.

August 6 and 9 mark the 77th year since the United States dropped atomic bombs on the Japanese cities of Hiroshima and Nagasaki, annihilating instantly an estimated 170,000 women, men and children and sentencing tens of thousands more to eventual death from radiation poisoning and injuries.

American military leaders from all branches of the armed forces strongly dissented from the decision to use the bombs, some before August 1945, some in retrospect, for both military and moral reasons.  On Armistice Day 1948, Army General Omar Bradley captured the soulless militarism ruling the US government: “Ours is a world of nuclear giants and ethical infants. We know more about war than we know about peace, more about killing than we know about living.”

Who are the “ethical infants,” the “we” who “know more about war than… about peace, more about killing than about living?”

that voted in 2017 to approve the United Nations Treaty on the Prohibition of Nuclear Weapons, despite heavy pressure by nuclear nations, foremost the United States, not to do so.  By August 2022, 66 countries have ratified the Treaty; many more are in the process of doing so.  Consider this a marathon for disarmament to outpace the current insane nuclear arms race in which all nine nuclear-armed countries are, in lockstep, upgrading their weapons.

Not The US Conference Of Mayors

a hugely influential group, representing 1,400 US cities of more than 30,000 citizens, that in August 2021 unanimously adopted a resolution calling on Washington to embrace the Treaty on the Prohibition of Nuclear Weapons as a step toward finally ridding the world of weapons of mass destruction.

Not The Majority Of The American Public

which, according to the 2020 Chicago Council Survey, believe that no country should be allowed to have nuclear weapons. These include majorities of Republicans (54%), Democrats (78%) and Independents (64%).

who recently committed civil disobedience, desperately warning that we have only a few years to stabilize emissions and then reduce them in order to avoid climate catastrophe. They were ignored by mainstream press and their western governments, which have focused exclusively on Russia’s war against Ukraine.  As a consequence of that war, the U.S. has undertaken new drilling for oil on federal lands, while it has been failing miserably to meet its goal of reducing climate change emissions 50% below 2005 emissions by 2030.

Not Veterans For Peace

who, while holding differing opinions about the roots of the ongoing war in Ukraine and the relative culpability of Russia, US and NATO, are unanimous in ending the conflict as soon as possible.

“Many of us continue to suffer physical and spiritual wounds from multiple wars; we can tell hard truths.  War is not the answer – it is mass murder and mayhem. War indiscriminately kills and maims innocent men, women and children.  War dehumanizes soldiers and scars survivors for life.  Nobody wins in war but the profiteers. We must end war or it will end us.”

Not The World Food Program:

whose director David Beaseley rages against an unprecedented food crisis for hundreds of millions in Asia and Africa as a result of Covid, climate crisis, and the lack of grain and cooking oil from Ukraine and Russia.  “We are facing hell on Earth…The best thing we can do right now is end the damn war in Russia and Ukraine and get the port open in Odesa.”

The bees
Do not stop
Collecting pollen
When humans
Murder each other
With guns.
The bees think:
How strange,
How low
On the evolutionary scale
Must those humans be,
That they haven’t yet
Figured out
How to make honey
Or peace.
– Bees by Alden Solovy

which communicate, share nutrients and water, and act to protect each other from pests and other threats by releasing repelling chemicals.  Trees connected in forests by underground networks of fungi live far longer lives than isolated trees.

Who, then, are the “ethical infants” who “know more about war than… about peace, more about killing than about living?”

among them Russia for its resort to war against Ukraine and US/NATO determined to bring Russia down by feeding the scourge of war with billions of dollars’ worth of weapons to Ukraine.

Public Citizen released a new report estimating that military contractors’ contributions to US Congressional members in 2022 “could see a nearly 450,000% return on their investment.”

The upgrading of nuclear weapons by nine countries and morbid fantasy of a military solution to the Russian-Ukraine conflict risk life on Earth. Only determined diplomacy, only ethical giants can save us from that.