Where Your Dollars Are Going: Antiwar Activists Withhold Taxes

Above Photo: Antiwar activists fed up with seeing 23 percent of their income taxes go toward US warmongering are refusing to pay. (Image: JR / TO; Adapted: Lance Cpl. Clare J. Shaffer / US Marine Corps, Pixabay)

Among the marches, petitions and call-in campaigns that comprise much of the Trump resistance movement, one resistance tactic gets little attention: withholding taxes. As the US seems ready to slide into yet another Middle East war in Syria while preparing for massive cuts to government programs at home, what role does tax resistance play in opposing regressive and violent policies?

While being anti-tax is typically associated with conservatism, there is a small but longstanding tradition within the progressive movement of withholding taxes — specifically, war taxes.

How does tax resistance work, and does it result in a lack of support for government programs that most progressives support and would like to see grow? How much of our taxes go to war, the military and militarism anyway, and how much to worthy programs like education, aid for struggling families, the environment and more?

Paying income taxes may not usually spur introspection, but it might if Americans realized that, for example, they are working 27 days out of every year to pay taxes that support war profiteers. Most progressives and many on the right of the political spectrum would never willingly write a check to weapons contractors, or speak in support of weapons systems that will fuel tomorrow’s air strikes and drone attacks. If Lockheed Martin, the nation’s most prolific military contractor, were a store or coffee shop, many would boycott it. So why willingly give Lockheed $170 a year through taxes — which the average taxpayer now does?

Pride and Prejudice: How the Government Helps (and How Americans Pay for It)

The extent to which government helps those who need it most and strengthens every community is certainly underappreciated in a country obsessed with “small government,” a nation that reveres former President Ronald Reagan, who once said, “The nine most terrifying words in the English language are: I’m from the government, and I’m here to help.” 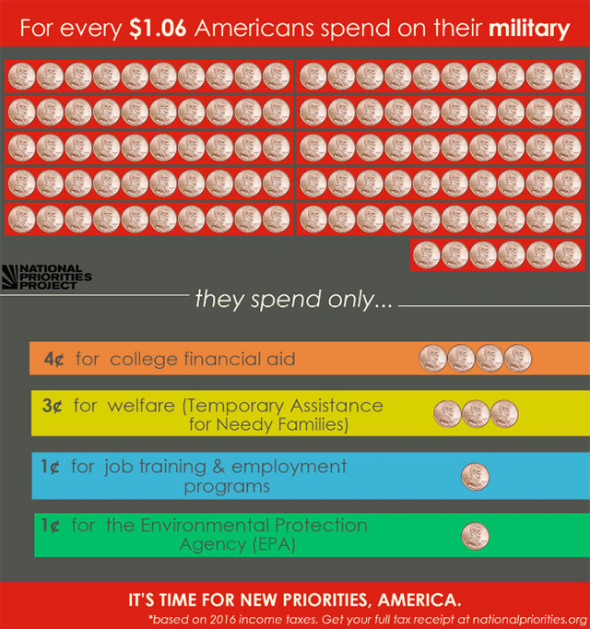 Of course, the government does help. More than half of almost every group of Americans — from every region of the country, white, Black, Latino, rural, urban, conservative, liberal — have benefited at some point in their lives from government programs like Social Security, Medicare, Medicaid, food stamps, unemployment and welfare. Government programs are often targeted to help those most in need of aid or those historically oppressed. Half of the students who receive Pell grants for college tuition come from families with incomes below $15,223, and 77 percent of them would be the first generation of their families to earn a bachelor’s degree. Nearly one in four Pell recipients is Black. Meanwhile, programs like Meals on Wheels for seniors are almost universally beloved and respected for taking care of some of the most vulnerable members of our society. The federal government serves as a crucial source of support for many.

The federal government is also a major source of employment itself, in particular one that tends to provide more opportunity for Black Americans than the private sector. In 2015, 18 percent of federal employees were Black, compared with 13 percent of the total population. Since federal jobs typically come with higher wages, better benefits and more job security than private sector jobs, it’s hard to overstate the impact the accessibility of these jobs has had on Black communities. Federal employment provides opportunity where private industry has not. By one estimate, President Trump’s proposals would cut federal employment by as much as 200,000 jobs — about 10 percent of the federal workforce.

These programs, as clearly as any the government runs, save lives. 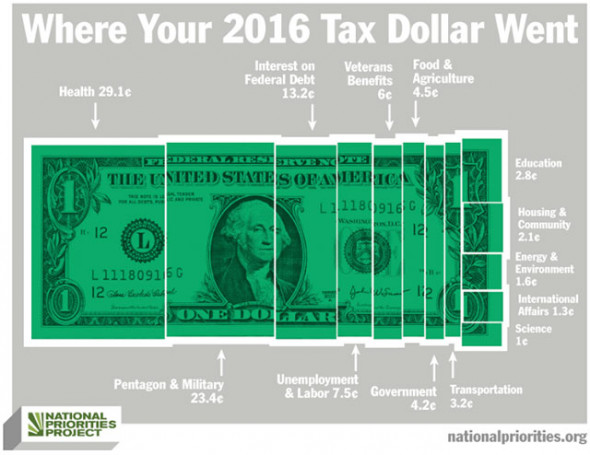 Taxpayers can and do feel proud to contribute to these programs that help their neighbors, friends, families and themselves, and take steps to counter inequality and racism.

These programs make our communities better, and we need more of them. For instance, the average taxpayer contributes about one quarter as much to unemployment and labor as to health care, despite the fact that jobs and the economy routinely show up as one of Americans’ top two priorities for the federal government (the other is often terrorism). For programs intended to end homelessness, the average taxpayer contributes just $10 a year, or about two and a half lattes.

Likewise, 20 years after “welfare reform,” welfare is still routinely cited by conservatives as a program to cut — despite the fact that the average taxpayer contributes only $77 per year to support the program that supports families working to escape poverty, officially called Temporary Assistance for Needy Families (TANF).

Meanwhile, the average taxpayer contributed $837 to veterans’ benefits — certainly a worthy cause, though it only remains so necessary because the United States’ ongoing wars keep creating new veterans, who often have health and service needs that go beyond those of many civilians.

Where Your Taxes Go: The Militarized Budget

On the other hand, there is another side of the US government: the government of tax breaks and tax cuts for the rich, the one that squanders as much on the military as the next seven countries combined; the one that has increased its spending on federal prisons by 10 times over the last 40 years — the government that seeks to consolidate power and exert control over the world’s most vulnerable people.

The US government promotes an extreme overreliance on military might and a disturbing parallel of policing, incarceration, surveillance and immigration raids and deportations here at home. A recent National Priorities Project analysis of the US discretionary budget showed that 64 percent of the federal discretionary budget — the budget decided by Congress each year, which is covered almost entirely by income taxes — is devoted to the military and militarism: to making and preparing for war, dealing with the consequences of war, and to programs that amount to intimidation and oppression here at home.

At least 23 percent of income taxes go to the military — and if you count spending on veterans’ benefits, national debt due to past wars, or other militarized spending like that for the FBI, federal prisons or immigration enforcement, the estimates only go higher. In addition to paying an average of $3,290 in yearly income taxes for the traditional military, Americans each pay $88 for border control and immigration and customs enforcement, $33 for the federal prison system, and more for programs ranging from the FBI to the CIA and beyond.

Only 22 percent of military taxes go to US troops for pay and benefits. Meanwhile, nearly half of the military budget goes to a powerful group of multinational corporations that make billions in profits from US warmongering.

Take Lockheed Martin. As the federal government’s biggest military contractor, it received $36 billion in taxpayer dollars in 2015, amounting to 80 percent of its revenues from all sources. Lockheed used those taxpayer dollars to pay its CEO more than $19 million in 2015. Taxpayers contributed six times as much to this one weapons maker as they did to all foreign aid in 2016. This should give us pause when we consider how often the US turns to military intervention versus prevention, diplomacy or other means during international crises.

And that’s just one contractor. In all, the Department of Defense handed out more than $297 billion in contracts in 2016 — more than half of the department’s budget.

Events like the Syria bombing, and Trump’s election, tend to send stock prices for these companies soaring.

An Act of Resistance

So, how does it all balance out? Does the government help more than it harms? Is there a way to support the good while resisting the bad?

This is what some war tax resisters attempt to do. In practice, resisting war tax runs the gamut from not paying any taxes at all to withholding a token amount of tax — as low as a few dollars — as a way of registering resistance. For those who want to support the government in its helping capacities, or who want to see those capacities grow, the second may be the better option.

Clearly, resisting taxes is not for everyone — it can come with legal penalties, headaches and a good deal of uncertainty. And of course, war tax resisting is not the only way to influence how your tax dollars are used: calling, visiting or writing your representatives in government; voting; and engaging in street protests play key roles in resisting war and militarism. Still, we are in the midst of a big resistance, and for some, resisting tax may be just what the doctor ordered.