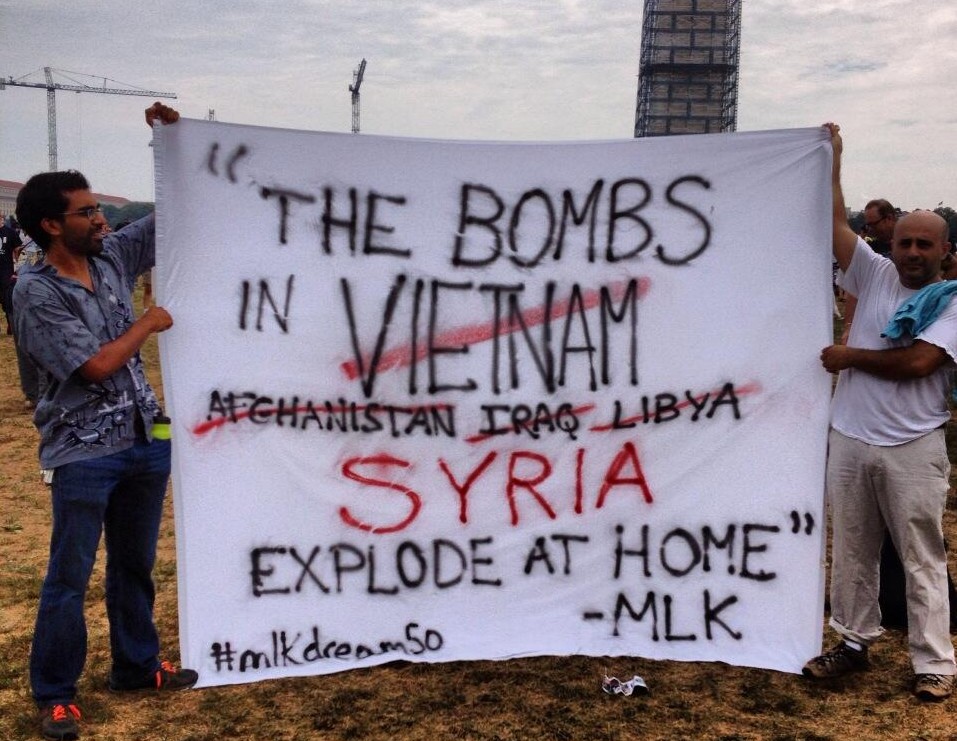 Let’s compare a couple of accounts of the mass deaths apparently caused by chemical weapons in the Damascus suburb of Ghouta on August 21. One account comes from the U.S. government (8/30/13), introduced by Secretary of State John Kerry. The other was published by a Minnesota-based news site called Mint Press News (8/29/13).

The government account expresses “high confidence that the Syrian government carried out a chemical weapons attack” on August 21. The Mintreport bore the headline “Syrians in Ghouta Claim Saudi-Supplied Rebels Behind Chemical Attack.” Which of these two versions should we find more credible?

The U.S. government, of course, has a track record that will incline informed observers to approach its claims with skepticism–particularly when it’s making charges about the proscribed weapons of official enemies. Kerry said in hisaddress that “our intelligence community” has been “more than mindful of the Iraq experience”–as should be anyone listening to Kerry’s presentation, because the Iraq experience informs us that secretaries of State can express great confidence about matters that they are completely wrong about, and that U.S. intelligence assessments can be based on distortion of evidence and deliberate suppression of contradictory facts.

Comparing Kerry’s presentation on Syria and its accompanying document to Colin Powell’sspeech to the UN on Iraq, though, one is struck by how little specific evidence was included in the case for the Syrian government’s use of chemical weapons. It gives the strong impression of being pieced together from drone surveillance and NSA intercepts, supplemented by Twittermessages and YouTube videos, rather than from on-the-ground reporting or human intelligence. Much of what is offered tries to establish that the victims in Ghouta had been exposed to chemical weapons–a question that indeed had been in some doubt, but had already largely been settled by a report by Doctors Without Borders that reported that thousands of people in the Damascus area had been treated for “neurotoxic symptoms.”

On the critical question of who might be responsible for such a chemical attack, Kerry’s presentation was much more vague and circumstantial. A key point in the government’s white paper is “the detection of rocket launches from regime-controlled territory early in the morning, approximately 90 minutes before the first report of a chemical attack appeared in social media.” It’s unclear why this is supposed to be persuasive. Do rockets take 90 minutes to reach their targets? Does nerve gas escape from rockets 90 minutes after impact, or, once released, take 90 minutes to cause symptoms?

In a conflict as conscious of the importance of communication as the Syrian Civil War, do citizen journalists wait an hour and a half before reporting an enormous development–the point at which, as Kerry put it, “all hell broke loose in the social media”? Unless there’s some reason to expect this kind of a delay, it’s very unclear why we should think there’s any connection at all between the allegedly observed rocket launches and the later reports of mass poisoning.

When the evidence isn’t circumstantial, it’s strikingly vague: “We intercepted communications involving a senior official intimately familiar with the offensive who confirmed that chemical weapons were used by the regime on August 21 and was concerned with the UN inspectors obtaining evidence,” the report asserts. Taken at face value, it’s one of the most damning claims in the government’s report–a veritable confession. But how was the identity of this official established? And what exactly did they say that “confirmed” chemical weapons use? Recall that Powell played tapes of Iraqi officials supposedly talking about concealing evidence of banned weapons from inspectors–which turned out to show nothing of the kind. But Powell at least played tapes of the intercepted communication, even as he spun and misrepresented their contents–allowing for the possibility of an independent interpretation of these messages. Perhaps “mindful of the Iraq experience,” Kerry allows for no such interpretation.

Another key claim is asserted without substantiation: “Syrian chemical weapons personnel were operating in the Damascus suburb of ‘Adra from Sunday, August 18 until early in the morning on Wednesday, August 21, near an area that the regime uses to mix chemical weapons, including sarin.” How were these personnel identified, and what were the signs of their operations? How was this place identified as an area used to mix sarin? Here again the information provided was far less detailed than what Powell gave to the UN: Powell’s presentation included satellite photographs of sites where proscribed weapons were being made, with an explanation of what they revealed to “experts with years and years of experience”: “The two arrows indicate the presence of sure signs that the bunkers are storing chemical munitions,” he said, pointing to an annotated photograph of bunkers that turned out to be storing no such thing. Powell’s presentation graphically demonstrated that US intelligence analysts are fallible, which is part of why presenting bare assertions without any of the raw materials used to derive those conclusions should not be very convincing.

Kerry did offer an explanation for why the report was so cursory: “In order to protect sources and methods, some of what we know will only be released to members of Congress, the representatives of the American people. That means that some things we do know, we can’t talk about publicly.” It is not clear, however, why intelligence methods that produced visual and audible evidence that could be shared with the public 10 years ago cannot be similarly utilized today. It does point to why the $52 billion the United States spends on surveillance annually, according to NSA whistleblower Edward Snowden (Washington Post, 8/29/13), provides relatively little information that’s of value to American democracy: The collection of information is considered so much more valuable than the information collected that it rarely if ever can be used to inform a public debate. Instead, as we discuss the dreadful question of whether to launch a military attack on another country, we are offered an undemocratic “trust us” from the most secretive parts of our government–an offer that history warns us to be extremely wary of.

Unlike the U.S. government, Mint does not have much of a track record, having been founded only about a year and a half ago (CJR, 3/28/12). The founder of the for-profit startup is Mnar Muhawesh, a 24-year-old Palestinian-American woman who believes, reasonably enough, that “our media has absolutely failed our country” (MinnPost, 1/18/12).  One of its two reporters on its Syrian chemical weapons piece, Dale Gavlak, is a longtime Associated Press Mideast stringer who has also done work for NPR and the BBC. AP was one of the few US corporate media outlets to question official assertions about Iraqi WMDs, contrasting Powell’s assertions with what could be discerned from on-the-ground reporting (Extra!, 3-4/06).

Mint takes a similar approach to the Syrian story, with a reporter in Ghouta–not Gavlak but Yahya Ababneh, a Jordanian freelancer and journalism grad student–who “spoke directly with the rebels, their family members, victims of the chemical weapons attacks and local residents.” The article reports that “many believe that certain rebels received chemical weapons via the Saudi intelligence chief, Prince Bandar bin Sultan, and were responsible for carrying out” the chemical attack. The recipients of the chemical weapons are said to be Jabhat al-Nusra, an Al-Qaeda-linked rebel faction that was caught possessing sarin nerve gas in Turkey, according to Turkish press reports (OE Watch,7/13).

Mint quotes Abu Abdel-Moneim, described as the father of a rebel killed in the chemical weapons attacks, as saying that his son had described carrying unconventional weapons provided by Saudi Arabia to underground storage tunnels–a “tubelike structure” and a “huge gas bottle.” A rebel leader identified as J describes the release of toxic weaponry as accidental, saying, “Some of the fighters handled the weapons improperly and set off the explosions.” Another rebel referred to as K complains, “When Saudi Prince Bandar gives such weapons to people, he must give them to those who know how to handle and use them.”

Of course, independent media accounts are not necessarily more credible than official reports–or vice versa. As with the government white paper, there are gaps in the Mint account; while Abdel-Moneim cites his late son’s account of carrying chemical weapons, the rebels quoted do not indicate how they came to know what they say they know about the origin of the weapons. But unlike the government, Mint is honest about the limits of its knowledge: “Some information in this article could not be independently verified,” the story admits. “Mint Press News will continue to provide further information and updates.”

This humility about the difficulty of reporting on a covert, invisible attack in the midst of a chaotic civil war actually adds to the credibility of the Mint account. It’s those who are most certain about matters of which they clearly lack firsthand knowledge who should make us most skeptical.