Dear Imperial America: the lifestyle you ordered is permanently out of stock.

February 15, 2017 “Information Clearing House” – Our extraordinary misallocation of national treasure and political power has set a banquet of consequences that few are willing to face, much less address head-on. If we had to sum up this vast misallocation, we might start by characterizing it as the result of a multitude of elites playing Empire with money borrowed from future generations.

We can start the list of extraordinary misallocations of national treasure with the Neocon’s endless wars of choice. Ten years ago, estimates of the total cost of the Iraq misadventure were $3 trillion: Cost of Iraq War: $3 Trillion; Cost of Solar Plants to Power all 105 million U.S Households: $500 Billion (April 10, 2008)

(Yes, I know solar energy is not “the solution” due to intermittency, lack of storage, fossil fuels are needed to build and maintain the solar infrastructure, etc.–but the point is: would we be better off if we’d invested 20% of the money squandered on the Iraq misadventure on alternative energy, even with all its limitations?)

But this does not exhaust the list of extraordinary misallocations of treasure.Universities have found the funds to build grand edifices on campus (never mind the trillion dollars in student loan debt that funded the delusions of grandeur) while much of the rest of our educational infrastructure crumbles as deferred maintenance takes its inevitable toll.

Public transit systems such as the San Francisco Bay Area’s BART always find the funds to pay for hefty raises and gold-plated benefits for employees and managers, meanwhile the system’s core has crumbled due to–you guessed it–hundreds of millions of dollars in long-deferred maintenance.

While employee wages, benefits and pensions dominate local government outlays, maintenance is funded by selling bonds, which cost twice as much over the long run due to interest and other costs.

Where cities and counties once funded school maintenance and filling potholes out of tax receipts, now many locales demand taxpayers approve tens of millions of dollars in new bonds to pay for these basic infrastructure maintenance projects.

It has reached the point that even maintaining city parks requires borrowing millions.

Political elites have found that promising the impossible–lower taxes and increased benefits/entitlements–keeps them in power, and as long as the credit spigot of new government borrowing is wide open, there are no limits on how many more trillions of dollars in future interest payments can be promised to win re-election today.

The fact that this sets a toxic banquet of consequences for future taxpayers and beneficiaries–no worries, some future politico will have to sit down at that banquet: 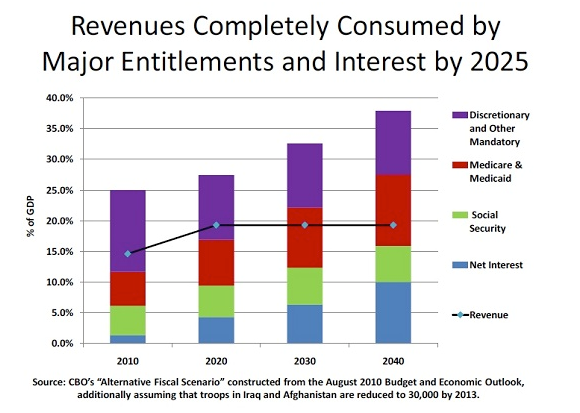 Political and financial elites have lined their own pockets and insured the continuity of their own power by deferring boring, unsexy, you-get-no-votes-for-this maintenance. Want to be “popular” and win re-election? Ram through sexy new projects such as “affordable” housing (i.e. costly housing subsidized by taxpayers), extensions in mass transit lines, fancy new stadiums and student-services buildings–and pay for it all with borrowed money and by slashing boring, unsexy maintenance work.

The drama of the Oroville Dam is tied directly to the deferral of rountine maintenance: What You Need To Know About The Oroville Dam Crisis (interview with a civil engineering expert and Chris Martenson)

I can personally attest to city streets that were potholed 20 years ago that finally got repaved–but only after taxpayers agreed to pay double by borrowing millions for routine street maintenance that was previously paid out of tax revenues.

I see spalling concrete (concrete falling off due to rusting rebar) at major international airports, university buildings that are flooded due to poor drainage that should have been addressed decades ago, water mains that burst, sewer lines that are decades past their replacement date–the list is truly endless.

Dear Imperial America: the lifestyle you ordered is permanently out of stock.The banquet of consequences has already been served, and will only become more distasteful the longer we put off facing our skyrocketing debt, runaway elites and delusions of grandeur head-on.