Joel Clement, who was reassigned after speaking out about climate change, says the administration ‘waged an all-out assault on civil service by muzzling scientists’.

Joel Clement’s resignation comes four months after he invoked the protections of whistleblower law for what he said was an illegal attempt by the department’s leaders to intimidate him for speaking out about climate change.

“You and President Trump have waged an all-out assault on the civil service by muzzling scientists and policy experts like myself,” Clement wrote in his resignation letter to Interior Secretary Ryan Zinke. “You have disrespected the career staff of the Department by questioning their loyalty, and you have played fast and loose with government regulations to score points with your political base at the expense of American health and safety.”

In the letter, Clement listed some of the groups of Americans who are reckoning with the impacts of climate change—including families and businesses in the path of hurricanes and flooding, the fishermen and farmers coping with new realities, medical professionals working to understand new diseases—and issued a warning. 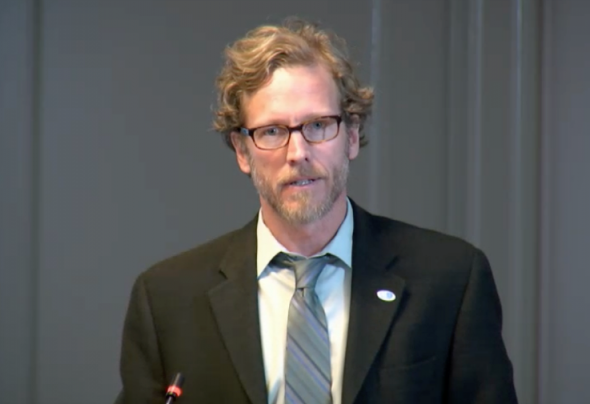 “If the Trump administration continues to try to silence experts in science, health and other fields, many more Americans, and the natural ecosystems upon which they depend, will be put at risk,” he wrote.

“Secretary Zinke: It is well known that you, Deputy Secretary David Bernhardt, and President Trump are shackled to special interests such as oil, gas, and mining,” Clement wrote. “You are unwilling to lead on climate change, and cannot be trusted with our nation’s natural resources.”

When Clement first blew the whistle, he accused the department of wasting taxpayers’ money. Clement, who had experience in science, policy and climate change, had been reassigned by Interior Secretary Ryan Zinke to a position for which he said he was unqualified.

The move shifted him from director of the Interior Department’s Office of Policy Analysis, where he spoke frequently and publicly about the impacts of climate change, to a position in the accounting department. There, he had a “job title with no duties in an office that specializes in auditing and dispersing fossil fuel royalty income,” he wrote in his resignation letter.

Complaints about the Trump administration wasting taxpayer dollars gained steam in recent weeks as news broke that Zinke and other cabinet officials, including EPA Administrator Scott Pruitt and recently resigned Secretary of Health and Human Services Tom Price, were using private planes paid for with public money. Politico reported that Zinke and his aides took several private or military flights, including a charter plane between Las Vegas and his hometown that cost taxpayers more than $12,000.

“Secretary Zinke, you and your fellow high-flying Cabinet officials have demonstrated over and over that you are willing to waste taxpayer dollars, but I am not,” Clement wrote in his letter of resignation.

After blowing the whistle, Clement told InsideClimate News that he tried to remain at his job and learn what was required for the new position. The breaking point came last week, he said, when Zinke accused one-third of the department of being disloyal to the Trump administration.

“Zinke’s comments the other day, demanding loyalty from the career staff, was just so offensive to everybody,” Clement said in an interview. “It caused me to sit and think, “I’m toiling away at something I’m not good at when I could be a voice for something that this agency is clearly not going to address.'”

He added that he felt the number of Interior Department employees who disagree with Trump and Zinke is probably much higher. “I would suggest it’s well over 90 percent,” he said, “and it went up after those comments.”

Before his reassignment, Clement’s work involved the intersection of climate change and public lands, and he was responsible for coordinating federal, state and local efforts to relocate Alaskan communities that are threatened by climate change.

“I’m still checking in with folks to see how things are going, and they’re saying everything is stalled out in Washington,” he said. “At the state level, everything is ongoing, but there’s just no support in Washington.” Meanwhile, the members of those communities are facing continued threats from erosion and the thawing of permafrost.

Clement’s whistleblowing spurred two investigations into Zinke’s actions in the department: one by the Office of Special Counsel and one by the Interior Department’s Office of the Inspector General, which was called for by eight senators the day after Clement came forward. Both investigations are ongoing.

Clement said he’s not sure what he’ll do next, though made it clear that, while he’s resigning, he’s not going away. “I have a lot of contacts in and outside the agency,” he said. “I’d like to use those to keep the pressure on the Trump administration.”