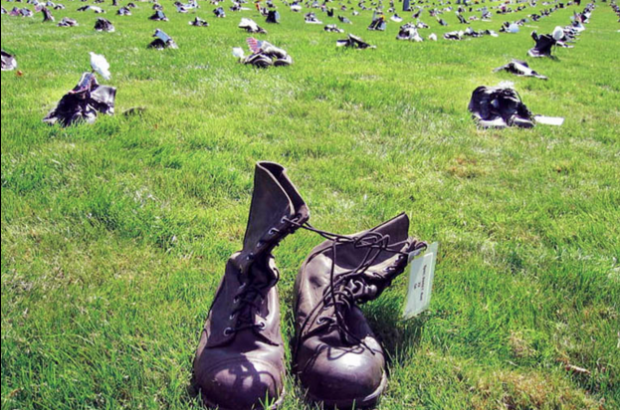 White House: Iran ‘On Notice,’ US Won’t Rule Out Attack

Above Photo: From CreativeResistance.org. Eyes Wide Open: US Military Personnel Killed In Iraq.

Note: Yesterday, Trump’s National Security advisor, Michael Flynn, but Iran on notice of a potential military attack. Trump followed that with his own tweet re-stating the threat.

Iran has been formally PUT ON NOTICE for firing a ballistic missile.Should have been thankful for the terrible deal the U.S. made with them!

Trump’s threat against Iran is of serious concern. Iran has always seemed to be one of the areas where Trump could get the US into war, from his own campaign rhetoric to his military and national security appointments. Of course, Iran is much bigger than Iraq and is connected to both China and Russia. In addition, Israel has threatened nuclear attack in the past and who knows if Trump wants to show he will use nukes to cower the world. US relations with Iran, which should be building on the positive steps mader with the anti-nuclear agreement, could be a grave danger to the world.  KZ

White House officials are ratcheting up the rhetoric over Iran’s recent ballistic missile test, accusing it of being “highly provocative” and threatening non-specific action, which might include military force, against Iran over the incident.

National Security Adviser Michael Flynn announced that the Trump Administration is “putting Iran on notice” over the test, saying that the test threatens stability across the region and “places American lives at risk.” Other officials said a lot of options were under consideration.

In practice very little happened to provoke this reaction. Iran’s single test of a medium-range ballistic missile almost certain did not violate the P5+1 nuclear deal’s restriction on testing nuclear-capable missiles, and Iran has insisted the design was purely defensive, with no consideration of carrying a nuclear payload.

Indeed, some analysts have noted the ballistic missile ban is largely irrelevant at this point, with Iran having only a small civilian nuclear program left. The Obama Administration had similarly gotten riled by such conventional tests in the past couple of years, but wasn’t being nearly so aggressive as today’s comments.

With President Trump making clear his intention to try to renegotiate the P5+1 nuclear deal, these new threats may be an attempt to scare Iran to the table. At the same time, putting the US on a war-footing on the first pretext after the inauguration risks putting the international community on Iran’s side over the matter, particularly with so many already concerned the Trump Administration is deliberately trying to sabotage the deal.