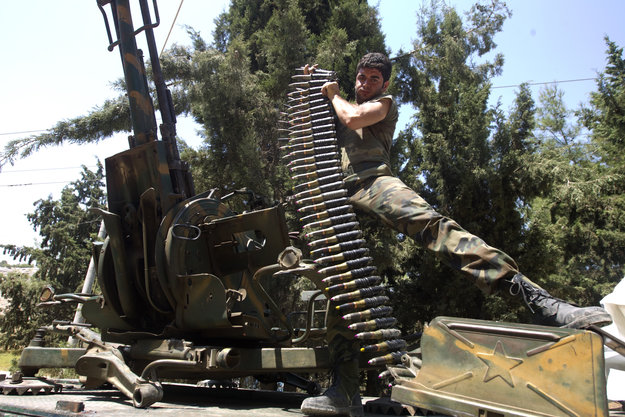 Above: A Syrian rebel fighter loads an anti-aircraft machinegun atop an armoured vehicle in the northern town of Atareb, 25 kms east of Syria’s second largest city Aleppo, on July 31, 2012. While fighting raged in Syria’s commercial capital Aleppo for a fourth straight day, clashes between the Syrian army and rebels also erupted in Damascus and other parts of the country,  the Syrian Observatory for Human Rights said.    AFP PHOTO/AHMAD GHARABLI        (Photo credit should read AHMAD GHARABLI/AFP/GettyImages)

Rebels interviewed by the MintPress News reporter claimed the weapons were funneled to them under the authority of Saudi Prince Bandar bin Sultan, head of the Saudi intelligence service

While wrestling with the case for a punitive attack on Syria over the alleged use of sarin gas against civilians, the White House is not commenting on a widely circulated report that the gas was released by rebels.

The report, based on interviews with residents and rebels in Ghouta, a Damascus suburb where hundreds have allegedly died from sarin exposure on Aug. 21, quoted locals who said the chemical was released accidentally by rebels who acquired it from Saudi Arabia.

The father of one rebel said his son and 12 others died inside a tunnel they were using to store weapons, including some described as “tube-like” and others looking like a “huge gas bottle.” The story appeared in MintPress News on Aug. 29, a Minnesota-based online operation whose staff includes veterans of The Associated Press, BBC News, The Guardian, National Public Radio and The Huffington Post.

The news report contradicts the narrative currently being laid out by Obama administration in an official assessment, not only in terms of who was responsible for the sarin deaths, but in the number of casualties.

MintPress’ reports the deaths at “more than 355” — the figure arrived at by Doctors Without Borders, which treated victims of gas exposure at three hospitals in Damascus. The U.S. assessment, laid out in a 4-page unclassified brief released Aug. 30, claims that 1,429 people were killed … including at least 426 children.  British intelligence reports a death toll of “at least 350,” while the French put the number at 281, according to multiple press reports.

Yahya Ababneh, the MintPress News reporter who was in Syria, told Military.com that rebels he interviewed said they moved the tube- and bottle-like weapons “every day from [one] place to another place.” One man told him he carried the weapons to one location but did not move them again.

The U.S. assessment is being touted principally by Secretary of State John Kerry, who spent much of last Tuesday afternoon arguing the case for action against Syria before the Senate Foreign Relations Committee. The U.S. maintains that the rebels do not have the ability to manufacture and deliver chemical weapons.

The President’s call for strikes on Syria comes 10 years after another Congress approved military action against Iraq that was built on weak and even contrived evidence that Saddam Hussein had weapons of mass destruction.

Then, there were also reports contradicting the Bush administration narrative, including a Newsweek story based on a UN debriefing of a former Iraqi military leader who revealed all Iraqi WMD were destroyed after the 1991 Persian Gulf War. Another was the public denial by former Ambassador Joe Wilson that he found evidence that Hussein was trying to acquire “yellow cake,” or uranium, from Niger — a claim made by the administration.

Lawmakers and much of the media ignored claims that contradicted the administration, and Congress authorized Bush to go into Iraq, where ultimately no weapons of mass destruction were found.

The MintPress News article is not the first to report that rebels have used chemical weapons. In July, Russian investigators provided the UN with a 100-page report that purportedly contains evidence of rebel use of chemical weapons in an area of Aleppo the previous March that killed 26 people.

The UN confirmed receiving the report, but has not released it, according to a Sept. 5 story by McClatchy News Service, which quoted the Russians as saying the work was done at Russian laboratories of the Organization for the Prohibition of Chemical Weapons and followed United Nations investigation standards.

In May, when the UN sent an earlier team in to Syria to investigate alleged use of chemical weapons, a senior diplomat with the group said investigators found no evidence that the Assad regime used chemical weapons, but collected testimony indicating some rebels have.

Also in May, several Turkish newspapers reported the arrests of a dozen members of the al-Nusra Front, an al-Qaida-linked Syrian group, who were in possession of more than 4 pounds of sarin. A Turkish state official denied the group possessed sarin, according to a May 30 Reuters report.

Kerry, in Senate testimony on Tuesday, dismissed claims of rebel use of chemical weapons as not credible, and the Senate Foreign Relations Committee subsequently approved the administration’s call for congressional support of a strike against Syrian government targets.

The White House offered no comment on the MintPress Report from Ghouta.

National Security Staff spokeswoman Bernadette Meehan said in an email to Military.com that the administration “laid out a very clear case for why it is our high confidence assessment that the Assad regime was responsible for the use of chemical weapons in Syria on August 21.”

But even lawmakers usually strongly on the side of the administration say otherwise.

Rep. Alan Grayson, D-Fla., wrote in a New York Times op-ed column on Sunday that he is skeptical of the U.S. claims. He said the classified version of the report that the U.S. has released is only 12 pages long, and that there is no other information — classified or unclassified — to back it up.

“The unclassified summary cites intercepted telephone calls, ‘social media’ postings and the like, but not one of these is actually quoted or attached — not even clips from YouTube,” he wrote.

Grayson said the White House is not willing to share critical intelligence with Congress, even when asking for its backing to launch an attack.

“My position is simple: if the administration wants me to vote for war, on this occasion or on any other, then I need to know all the facts. And I’m not the only one who feels that way,” Grayson said.

Rebels interviewed by the MintPress News reporter claimed the weapons were funneled to them under the authority of Saudi Prince Bandar bin Sultan, head of the Saudi intelligence service.

The Saudi origin of the weapons, as claimed by rebels in the MintPress News story, would itself prove a problem for the U.S. — especially since Prince Bandar bin Sultan, a member of the Saudi royal family and head of its intelligence service — is the one alleged to have authorized giving the weapons to the rebels.

Ababneh, who has been reporting from the Middle East for four years, expressed confidence that the people he interviewed were being straight with him about what they did and saw.

“They are working there, they talk as they complain. They did not prepare their words,” he told Military.com.

Even as the U.S. launches its full-court press to get Congress to back a Syria attack, the UN continues to work to confirm whether chemical weapons were used at Ghouta. The UN’s investigation into the Ghouta attack is intended only to determine if such weapons were used, not to point a finger at who used them, according to a statement by UN Secretary-General Ban Ki-moon.

That was not the case earlier this year, when the UN’s Commission of Inquiry on Syria went to that country to look into previous allegations of chemical weapons use. Then, Commission member Carla del Ponte, a Swiss national and former chief prosecutor of two UN international criminal law tribunals, said evidence pointed to use of chemical weapons by rebels.

“And we have no indication at all that the government, the … Syrian government, had used chemical weapons,” she told the BBC in May.