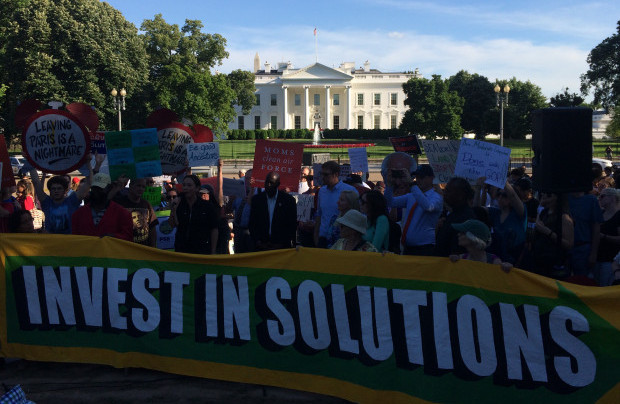 Above and below: John Zangas for DC Media Group 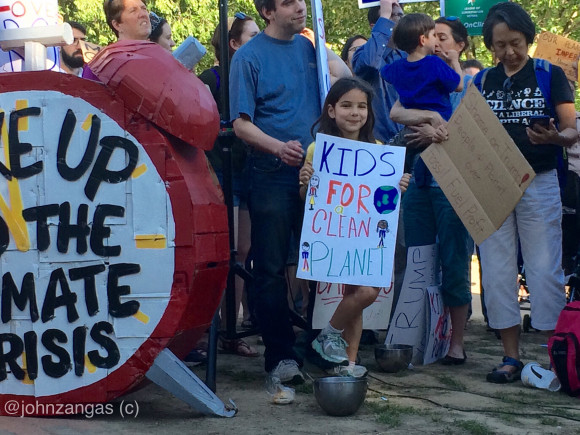 Dozens of speakers, including leaders of think tanks, former government officials, and representatives from environmental groups converged on the White House Thursday afternoon to criticize President Donald Trump for his decision to back out of the Paris Climate Agreement. Trump’s decision to rescind the US endorsement of the Accord was seen as a set back to collective efforts to curb climate change.

The Paris Climate Accord was signed in December, 2015 by 195 countries, and was heralded as a first step towards reducing climate change inducing gases. The US now joins a short list of two countries that did not endorse the accord, namely Syria and Nicaragua.

The accord provides for five year incremental reviews and adjustments to keep up with sciencetific developmets as more is learned from the evolving climate situation. It also provides a means of gradually weening civilization off carbon based fuels.

One by one speakers railed against Trump’s decision, calling it a “head in the sand” and “climate change denier’s” response on behalf of fossil fuel industry interests.

Congressman Jamie Raskin of the 8th District of Maryland, said that climate denialism “threatens the existence of the human species.” His district includes the headquarters of NOAA, the government agency responsible for tracking carbon levels in the atmosphere.

The congressman cited the fact that 97 percent of professional scientists confirm that climate change gases are due to human induced carbon and methane emissions.

Climate change impacts on health are already being felt, argued Barbara Gottlieb, Director of Environment and Health for Physicians for Social Responsibility (PSR). Gottlieb said that heat stroke is on the rise globally due to rising temperatures and that it is the leading cause of death related to climate change. “In fact we are in a health emergency now due to climate change,” she said.

PSR supports a broad based effort to reduce fossil based fuels because of its indirect contribution to the spread of infectious diseases. “Climate change aggravates the frequency and intensity of extreme heat waves, increases the risk of dangerous weather events, and augments the spread of insect-borne and water-borne diseases,” PSR published on its website.

The destabilizing effects of climate change pose a national security threat to the nation argued Michael Breen, President & CEO of the Truman Center and Truman National Security Project. “The pentagon recognizes climate change as a threat acceleratior and one of the great threats of the 21st century,” he said.

Breen offered job creation in the renewable energy industry as yet another argument to remain as a signor to the Paris Accord. “We will fall behind in the race to the 21st century. The solar and wind farms are going to be the future of energy independence and economic revitalization,” said Breen.

A report published early this year by Environmental Defense Fund (EDF) highlighted a twelve fold growth rate in renewable energy jobs creation as compared to the rest of the economy. “The renewable energy sector has seen rapid growth, driven largely by significant reductions in manufacturing and installation costs. In 2015, renewable energy jobs in the U.S. reached 769,000, the result of a compound annual growth rate (CAGR) of nearly 6% since 2012.6 Job creation in this sector has outstripped the fossil fuel industry.  Solar and wind jobs have grown at rates of about 20% annually in recent years and are each creating jobs at a rate 12 times faster than that of the rest of the U.S. economy.”

The report also cited a 64 percent increase in electricity generation since 2012, by renewable energy sources such as wind and solar power generation.