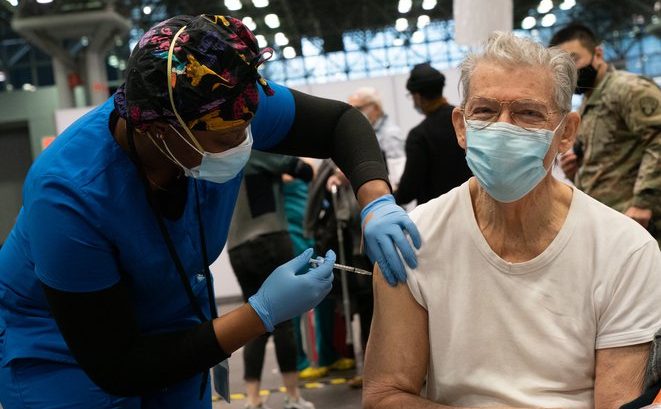 Above photo: An unidentified man receives a COVID-19 immunization on opening day of the large-scale vaccination site at the The Javits Center. Dan Pollard.

Three white residents receive a COVID-19 vaccine for every Black or Latino person in the city, according to new demographic data released by the mayor’s office on Sunday.

At a press briefing, Mayor Bill de Blasio said there was a “profound disparity” about seven weeks into the city’s vaccination program.

“Clearly, what we see is a particularly pronounced reality of many more people from white communities getting vaccination than folks from Black and Latino communities,” de Blasio told reporters. The vast difference in vaccine coverage shows the city isn’t meeting its pledge for equitable distribution.

The mayor said supply problems were central to the challenge of distributing vaccines equitably across communities of color. He and health officials at the briefing also cited vaccine hesitancy as another difficulty. Surveys have shown that Black and Hispanic New Yorkers are more reluctant to get vaccinated than white people.

The mayor also called on vaccine providers do a better job recording demographic information when doling out shots, as 40% of vaccine recipients—or 263,466 people—did not offer their race or ethnicity during their clinic visits. 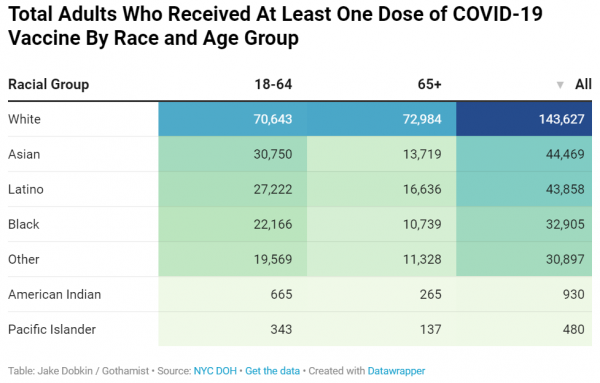 Race: Overall, Black and Latino residents have received half the share expected for them based on the city’s population makeup.

While Latino residents make up 29% of New York City residents, they comprise only 15% of the vaccine takers. The Black community accounts for a quarter of the city, but their vaccination rate is merely 11%.

Far and away, the largest proportion of the COVID-19 vaccine is going to white residents. Though they make up a third of the city, they account for about half of the known vaccine takers. 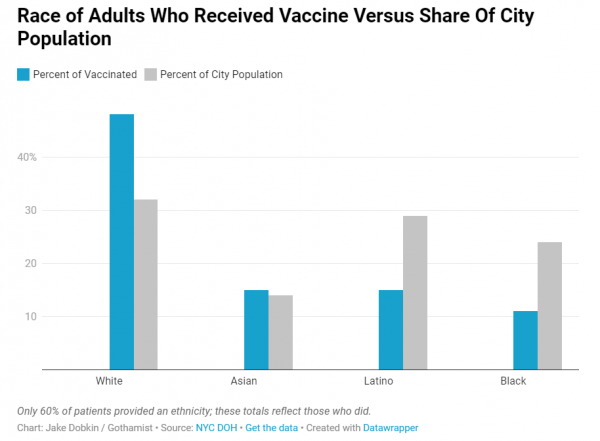 Age: The racial and ethnic disparities widen when you look at the breakdown for people over the age of 65, who are more likely to suffer severe consequences from COVID-19.

OIder white adults have taken about four to five times as much COVID-19 vaccine as their Latino and Black counterparts, respectively. They’ve also received twice as many shots as older Asian residents. 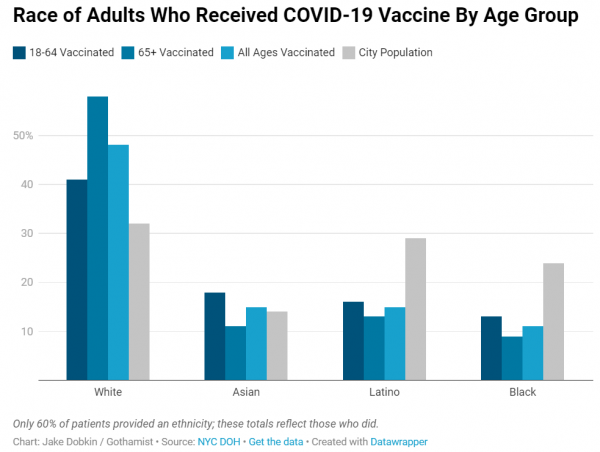 The data overall reveal that the COVID-19 vaccinations are mirroring the unbalanced realities New York City—and the nation—have seen throughout the pandemic: Black and Latino residents by and large suffer the highest death rates, which are attributable to inequitable access to health care and housing.

“We’ve got a profound problem of distrust and hesitancy, particularly in communities of color. We’ve got a problem of privilege, clearly,” de Blasio said. “We’ve got to have a more systematic approach to ensuring that we focus on the places where the danger is the greatest.”

The city did not release ZIP code data—though the mayor indicated the city’s “hard-hit” neighborhoods are suffering the vaccine disparity.

“We know factually the seniors in greatest danger are in those 33 neighborhoods that we’re not seeing as high a vaccination rate in,” de Blasio said. He added that zip code data would be released in the coming days. The data arrive days after Gothamist revealed the city had posted and then removed race and ethnicity data in December.

Similar disparities are emerging among the 20 or so states reporting race and ethnicity data for their vaccine rollouts. In New Jersey, white people have received 48% of the doses administered versus 6% Asian, 3% Black, and 5% Hispanic/Latinx.

The governor added that virtually all the hospital workers in the state had been offered the vaccine, and he described this data as “the clearest demonstration of hesitancy” among different racial and ethnic groups. He said the health department is analyzing the demographic data for all citizens now, but that his wager would be it’s going to be proportionate to what you see in the hospitals.

Dr. Torian Easterling, the chief equity officer at the city’s health department, said Brooklyn faith leaders have told him hesitancy is apparent—but that there’s also an eagerness to get the vaccine.

“We need to build back trust,” Easterling said. He announced that vaccination equity efforts would now focus on 33 of the hardest-hit neighborhoods, an increase from a previous list of 27.

The new efforts build on the city’s current plans, which the city has touted for weeks. There have been multilingual ad campaigns, public housing vaccine sites, and vaccine information sessions—alongside a repeated promise to ensure the disparities that happened during the peak of the virus would not occur again with the vaccines.

But, the mayor said: “I think the ultimate solution is to have a big enough supply, again, create momentum, create that kind of grassroots word of mouth effect.” The Biden administration is expected to increase deliveries by 16% this week and release an online planner to aid local distribution.

The head of the racial inclusion and equity task force, Sideya Sherman, emphasized efforts similar to those the city announced in mid-December, to train local leaders and a corps of “vaccine navigators” to help people find resources and make appointments. More than 200 NYCHA staff will be a part of the initiative.

De Blasio said repeated conversations with people unsure about the vaccine would be needed, because those with the highest COVID-19 risk are not receiving the vaccine. “People need to hear from members of their own community,” de Blasio added.