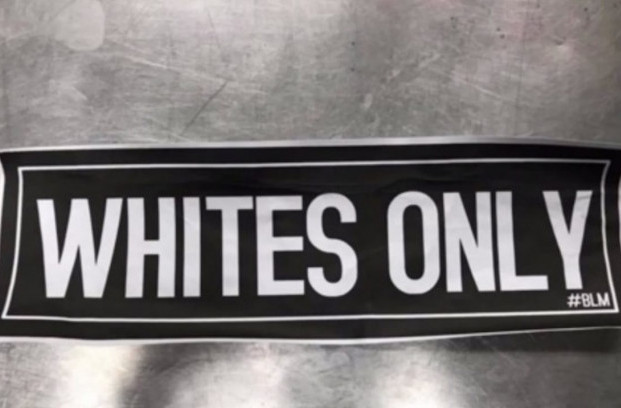 Above Photo: From theblaze.com

“I was hit with a nasty surprise,” Qayum Mohammed, owner of Afghan restaurant Sameem, told the outlet. “I thought ‘Wow, that’s ignorant.’”

Mohammed was also concerned over why his establishment was targeted, StLToday said — until he learned that stickers were placed on at least three other restaurants in the Grove, a well-known and diverse entertainment district.

“I was very relieved,” he told the outlet.

Do we know who did this?

Surveillance video shows a group walking by a restaurant with one of them placing a sticker on the front door and then the group continuing down the sidewalk, KMOV-TV reported.

Even more curious is the #BLM hashtag — presumably standing for Black Lives Matter — found in the lower right-hand corner of the stickers.

While the culprits’ motives are unclear, the vandalism comes on the heels of violent protests in St. Louis over the murder acquittal last week of a white former police officer who fatally shot a black motorist in 2011.

KMOV noted similar signs have been used in the past as a shock tactic to generate discussion and dialogue. In addition, numerous racist messages found in public places nationwide in recent years have turned out to be hoaxes.

The owners of Layla, another restaurant, called their discovery of a “Whites Only” sticker “heartbreaking.”

“We pride ourselves on being open, accepting and inviting of all types of people,” the restaurant wrote on its Facebook page, KMOV reported.