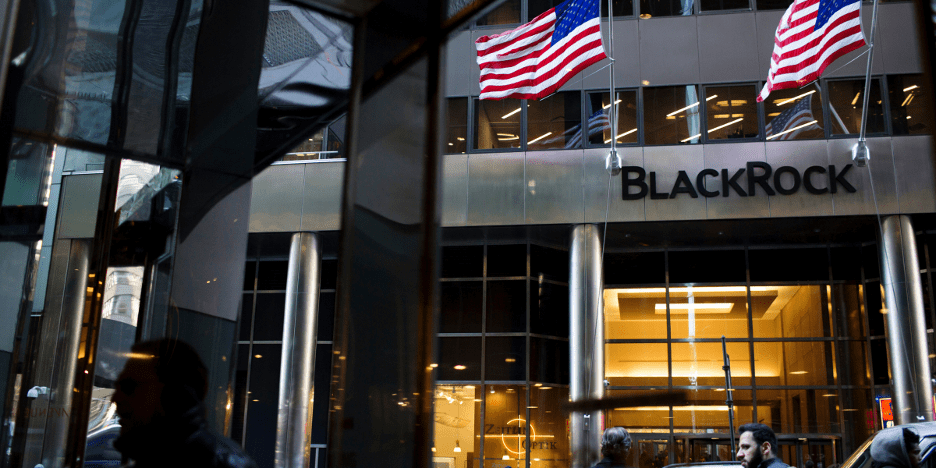 Who Are The Ultimate War Profiteers?

Above photo: BlackRock offices on “the street.” fortune.com.

While war corporations, or so-called “defense contractors,” make billions in profits, Wall Street is the ultimate beneficiary of today’s nonstop wars. The prosaic nature of war profiteering—far from the work of a shadowy cabal—is precisely why the collusion is so destructive and should be outlawed.

The U.S. ruling class deploys the military for three main reasons: (1) to forcibly open up countries to foreign investment, (2) to ensure the free flow of natural resources from the global south into the hands of multinational corporations, and (3) because war is profitable. The third of these reasons, the profitability of war, is often lacking detail in analyses of U.S. imperialism: The financial industry, including investment banks and private equity firms, is an insatiable force seeking profit via military activity.

The war industry is composed of corporations that sell goods and services to the U.S. government and allied capitalist regimes around the world. Investment banks and asset management firms hold most shares of every major public war corporation.

New business sectors of war are created and then flooded. For example, the provision of “cyber” was virtually nonexistent in U.S. military contracting until roughly four years ago. A war industry push to militarize IT infrastructure has yielded a bonanza in cyber contracts. Today, “cyber” goods and services are sold stand-alone or as additions to previous contracts.

They all sell cyber. The main exception is Huntington Ingalls, a major shipbuilder, which does not sell stand-alone cyber goods, although it does mandate cybersecurity as part of its supply chain. The top private war corporations—Sierra Nevada Corp. and General Atomics, run by the billionaire Ozmens and Blue Brothers, respectively—also sell cyber goods and services.

This single business sector of war, cyber, is worth billions annually. Claims of Chinese and Russian cyber hacks, fabricated or hyped by war industry think tanks and media affiliates, fuel government purchases of cyber goods and services. For its part, the U.S. government—first to use devastating new weaponry, from atomic weapons to cyber weapons, and first to attack Moscow with cyber weapons—positions its aggression as purely defensive.

In November 2018, Parsons—whose leadership is packed with bankers, career war profiteers, military and intelligence retirees, and a coal tycoon—was contracted for cyberspace operations mission planning in Centerville, Virginia. In May 2019, Parsons was contracted with nine other corporations to expand the cyberspace backbone of the Naval Information Warfare Center Pacific of San Diego, California, a military unit whose mandate is to dominate all forms of space (cyberspace, airspace, and Earth’s orbit).

In January 2020, Parsons and other corporations were contracted by the same unit to further develop, oversee, and employ broad cyber technology integral to that mandate, from the continental United States, to Guam, Japan, Australia, and Singapore, to Bahrain, Djibouti, and Italy. This is just one example of one corporation. Corporate America blankets U.S. military cyber operations worldwide.

No business sector of war is off limits.

As recently as the early 1990s, it was considered sacrilege for corporate employees (“contractors”) to be involved in intelligence matters. Not anymore. U.S. intelligence (both civilian and military) is corporatized.

Consider the Defense Intelligence Agency. DIA was established in the 1960s to consolidate the military’s disparate intelligence activities. It did not consolidate much, as the individual military branches continued to run distinct military-intelligence operations.

Since the 1960s, DIA has expanded dramatically in size. Corporations carrying out DIA’s activities during the most recent fiscal year included work in its Science & Technology Directorate (five years, $990,000,000), its National Media Exploitation Center, and its Missile & Space Intelligence Center (MSIC).

Again, all military and intelligence activity is up for grabs, even the Atlantic Undersea Test and Evaluation Center (AUTEC), a military range for testing and evaluating the war industry’s technology (e.g., anti-submarine weapons, sonar tracking, and communications). Some have nicknamed AUTEC the “Navy’s Area 51” because of the testing of high-tech unconventional weapons. [Area 51 is a testing range in Nevada where classified programs are worked on and experimental aircraft are flown.]

The Navy established AUTEC on Andros Island in the Bahamas to take advantage of the deep oceanic trench that runs along the east coast of the island. PAE is traditionally the go-to corporation that operates and maintains AUTEC, though a newly formed corporation known as Amentum recently took over some of these functions.

The private equity firm Lindsay Goldberg owns Amentum, which was created in 2020 when AECOM, a massive engineering and project management firm, sold its management services business. Amentum now directs this business. Overseas, this management services business has recently transported equipment, cargo, and personnel around Europe; run logistics for prepositioned matériel in Germany, Kuwait, and Qatar; supported drone operations in the Middle East; and repaired support equipment and helped with maintenance at Navy sites in Comalapa, El Salvador. These operations now all belong to Amentum.

In November 2020, Amentum made another move: It acquired DynCorp, a corporation reported to have a deep history of mercenary activity in Latin America and the Middle East.

According to contract announcements, DynCorp has recently overseen war reserve matériel in the U.S., Kuwait, Oman, Qatar, and the UAE; maintained military aircraft around the world, including in Honduras, Germany, Afghanistan, Iraq, and Kuwait; sold aircraft maintenance to Sweden and Saudi Arabia; and run substantial worldwide training and equipping of forces, emergency construction, and logistics.

Big Finance wheels and deals war corporations, viewing bases, troops, and warzones as numbers through which to profit.

Another prominent financial player is Veritas Capital, which once owned DynCorp and now owns such corporations as Alion and Peraton, the latter of which is about to acquire Northrop Grumman’s IT business. Peraton’s recent sales to the U.S. military establishment have included: portable systems to foil radio-controlled explosive devices that sundry groups use to attack Western military forces that invade or occupy their countries; work on undersea drones; work to ensure nuclear missiles reenter Earth’s atmosphere properly; IT work that “directly supports American national security interests on the continent of Africa,” according to the contracting announcement; cyber activities for the Air Force Research Lab; and commercial satellite communications for Central Command. All is fair in profit and war.

Big Finance sits at the top of the war industry by purchasing most shares of war corporations and by owning war corporations. Insatiable demand for profit places immense structural pressure on the Pentagon and Capitol Hill for sky-high U.S. military and intelligence budgets, broad deployment of troops overseas, and the opening up of governmental jobs to corporations.

The most well-known industry pressure comes in the form of lobbying both political parties and funding their congressional campaigns (with extra focus on members of pertinent committees, such as Armed Services, Intelligence, Appropriations, and Foreign Relations).

The Executive Branch is not exempt. Rapacious financiers—including hedge fund chiefs and venture capitalists—top the list of donors to the Biden Administration, though dark money groups prevent a full understanding of the overall campaign finance picture. Between July and September at least 67 billionaires and their spouses made contributions of more than $100,000 to committees supporting Joe Biden and the Democratic Party, according to records filed with the Federal Election Commission.

Biden’s campaign received over $9 million from Donald Sussman, CEO of Palmora Partners, a multi-billion dollar hedge fund, which has more than 260,000 shares in Raytheon, a preeminent weapons manufacturer and supplier of weapons to Saudi Arabia, which recently won a $100 million contract for Afghan Air Force training.

Another of Biden’s top donors, Jim Simons, who gave over $7 million, founded Renaissance Capital, which owns 1.2 million shares in Raytheon worth over $75 million, and 130,000 shares in Lockheed Martin worth $50 million.

Big Tech is positioned prominently among donors to the Biden inauguration celebration. Biden has been clear on the campaign trail that he does not intend to cut the military budget, even going so far as stating, “I’ve met with a number of my advisors and some have suggested in certain areas the budget is going to have to be increased.” Biden’s advisors are part and parcel of the military-industrial-congressional complex. Cozying up to wealthy donors, Biden infamously assured them that “nothing would fundamentally change” in a Biden presidency.

Corporate media air info-tainment, designed not to inform or foster critical thinking. Informing the public is not a priority. Maintaining the existing economic order is.

To the extent that corporate media air any information at all, the information reflects the opinions of the ruling class and the dogma of Corporate America.

Politically conditioning the U.S. public, corporate media never blame the military-industrial-congressional complex or capitalism for any of the problems in the world. Aiming for high ratings and lucrative advertising revenue, corporate media self-censor and taper the spectrum of acceptable foreign policy debate. War corporations purchase advertisements on corporate “news” shows to further confine the debate. Corporate pundits and newscasters do not speak out against advertisers.

The Smith-Mundt Modernization Act of 2012 allowed government to increase its propaganda in corporate media. Drawing funding from the wealthy donor class and large corporate interests, National Public Radio is similarly confined. NPR’s new CEO as of September 2019 is John Lansing, who recently led U.S. propaganda at the U.S. Agency for Global Media.

Wars must be created and expanded, and military bases, through which to route goods and services, must be established and entrenched to satisfy investors. Notwithstanding, ending the wars first requires addressing the embedded profit motive, otherwise it is business as usual.

Christian Sorensen is an Air Force veteran and author of the new book entitled Understanding the War Industry. See CAM’s review of the book: Wars R Us: A Review of Christian Sorensen’s New Book.