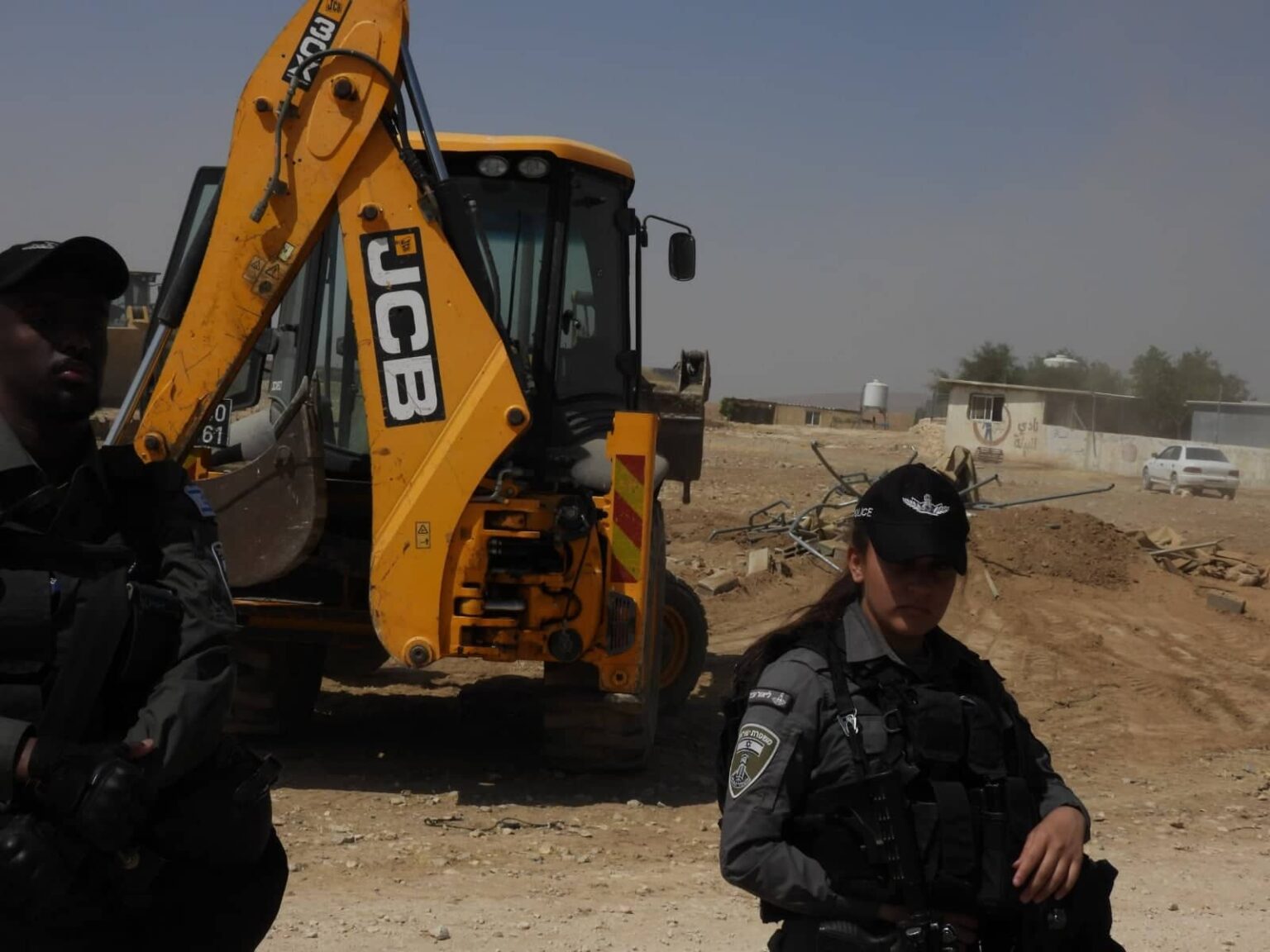 Who Is Aiding Israel?

On June 1, 2022 tens of Israeli soldiers and JCB,  Volvo and Caterpillar  bulldozers raided the villages Al-Fakheet and Al-Markez and demolished seven residential tents and animal shacks, leaving families along with their herds homeless. This is the second time these families lose their homes in less than a month. On May 11, 2022, the Israeli occupation, Volvo and JCB bulldozers raided Al-Fakheet, Al-Markez and Al-Tuwani and razed 19 homes and animal shacks to the ground. Insisting to exist on their land, the owners of the destroyed homes rebuilt them again; some of which were among the seven demolished homes yesterday.

Earlier this month, on May 4, Israeli Supreme Court ruled in favor of its settler colonial society: The expulsion of eight villages inhabited by over 1000 people in Masafer Yatta. The recent demolitions  embody practical steps towards enforcing the court’s decision, particularly in Al-Fakheet and Al-Markez, which are among the eight  threatened villages.

Masafar Yatta, in the south of Hebron, is home to 20 Palestinian communities, which have been living and herding their livestock in the area since generations. Classified as a firing zone, the expulsion of the eight communities would be a culmination of decades-long apartheid and settler colonial practices in the area. The forcible expulsion of these communities paves the way for Israel to annex Masafer Yatta and further consolidate its illegal settlement enterprise.  Land confiscation, including through the pretext of ‘military needs’ has been highlighted by the UN Special Rapporteur on human rights in the OPT in his latest  as one of the salient features of Israeli apartheid. Villages in Masafer Yatta, such as Um Al-Khair have been highlight as a case study, in Amnesty International’s groundbreaking report on Israeli apartheid.

Below we showcase the role of international machinery and construction firms in aiding the destruction of Palestinian homes in Masafer Yatta since the start of 2022.

In addition to the recent use of JCB bulldozers in the latest demolition of Palestinian property in the three Masafer Yatta villages on June 1 and May 11, the company’s equipment was also used in previous demolition incidents. Months ahead of the Israeli Supreme Court’s ruling in favor of the ethnic cleansing of Al-Fakheet, the Israeli occupation forces raided the village on January 12, 2022. JCB bulldozers were used to reduce seven homes and animal shacks to rubble in Al-Fakheet. Before bulldozing them, a large number of combat-ready Israeli soldiers besieged the families inhabiting the homes. The families, along with their clothes, furniture and food were thrown out of the homes before JCB bulldozers razed them to the ground.

JCB, the world’s third largest construction company is not only used to destroy Palestinian homes. The company’s exported equipment to Israel is also used to construct illegal settlements, settlement industrial zones and apartheid infrastructure in the occupied West Bank and Syrian Golan Heights. JCB machines were involved in the construction of the Apartheid Wall on stolen Palestinian Land. According to Who Profits, the British-based company’s track and wheel excavators and wheel loaders were documented during the construction of the wall near the Palestinian villages of Al-Walaja, Anata and Beit Jala and at the Qalandiya and Ofer checkpoints. The models used for these tasks are JS330, JS200, 537 and 3CX.

JCB equipment was used in building the Jerusalem rail train. The Jerusalem light rail train connects large illegal settlement blocs with the western side of the holy city. The execution of this project, which is still ongoing, expropriates Palestinian land and entrenches geographic contiguity for illegal settlements. It further fragments Palestinians living in the district of Jerusalem while allowing settlers to move freely and rapidly to and from Jerusalem.

This is an integral part of the mass ethnic cleansing campaign spearheaded by the Israeli government and different settler organizations to impose Jewish supremacy on the city.

Another big project of apartheid and ethnic cleansing, in which JCB is complicit, is its involvement in the construction of the Apartheid Wall. In 2004, the International Court of Justice issued its advisory opinion on the illegality of the Wall and called on Israel to immediately dismantle it. While the ICJ was calling on the international community, including corporations, to comply with  its obligations under International Lawnot to aid or assist Israel in the construction of the Wall, JCB provided its machinery to displace Palestinians, destroy their agricultural land and build the Wall on it.

In the UK, where JCB is based, Lawyers for Palestinian Human Rights (LPHR) have brought a  against the British OECD Contact Point. In November 2021, the government watchdog  with  LPHR that JCB failed to respond to due diligence requirements. Yet, it hasn’t required immediate action.

Protests were also held in the UK against the company.

Since the start of 2022, Volvo has been involved in the demolitions in Al-Tuwani, Al-Fakheet and Al-Markez on June 1,  May 11.

Volvo is headquartered in Sweden. The Volvo brand comprises Volvo AB and Volvo Cars. In 2010, Volvo Cars, which was held by Ford Motors, was sold to the Chinese corporation Geely. The rest of which is owned by Merkavim  which is the exclusive distributor of Volvo in Israel. Both Merkavim and Mayer’s Cars and Trucks are on the UN database.

Volvo Buses, a subsidiary of the Volvo Group, owns 26.5% of  which supplies armored buses for  lines in the

Volvo Buses, a subsidiary of the Volvo Group, owns 26.5% of  which supplies armored buses for  lines in the occupied Palestinian territories. The rest of which is owned by Merkavim  which is the exclusive distributor of Volvo in Israel. Both Merkavim and Mayer’s Cars and Trucks are on the UN database.

Since the start of 2022, Volvo was involved in the demolitions in Al-Tuwani, Al-Fakheet and Al-Markez on June 1,  May 11. Masafer Yatta is only one area, among others, in which Volvo bulldozers are used to destroy Palestinian homes. The Swedish-based firm has consistently been in use to wreak havoc on the lives of Palestinians in Area ‘C’, East Jerusalem and Al-Naqab. Volvo bulldozers have been documented in use to demolish Palestinian homes in the Jordan Valley, an area in which Palestinians have been enduring Israeli de facto and planned de jure annexation measures for decades. Last year, Volvo equipment was used to intensify Israeli water apartheid practices against Palestinians living in Khirbet Humsa Al-Fawqa, Northern Jordan Valley.

Volvo bulldozers were particularly used to confiscate water tanks, the only source of water for Palestinians of Humsa and Bedouin communities in the Jordan Valley at large. The intensified water apartheid campaign was an effective tool to forcibly expel the community after demolishing their homes several times within less than a year, starting in November 2020.

Volvo machinery have been also used in the demolition of the village of Al-Araqib in the Naqab. Al-Araqib. So far, the Israeli authorities have destroyed Al-Araqib 180 times. Al-Araqib is among unrecognized 36 villages threatened by imminent Israeli ethnic cleansing in the Naqab. On the ruins of these villages, the Jewish National Fund plans to plant a forest.

Like JCB, Volvo tools are used in the construction of illegal settlements and the Apartheid Wall.

On March 15, 2015, the Student’s Society of McGill University passed a resolution divesting from companies that profit from the “Illegal Occupation in Palestinian Territories,” including Volvo.

Caterpillar claims that it helps its customers to build a better, more sustainable world. With Israel as one of its customers, Caterpillar has, in fact, been helping Israel to destroy Palestinian homes and expel Palestinians from their land.

In 2003, a D9 Cat bulldozer killed American activist Rachel Cori while she was trying to stop it from bulldozing a Palestinian home in the Gaza Strip. The corries sued Caterpillar over their daughter’s death, but a US federal judge rejected the case in 2005.

For more about the company’s complicity in Israeli crimes, read a Corporate Occupation report here.

For years, Hyundai Heavy Industries has been making profit from illegal settlement expansion in the occupied West Bank, East Jerusalem and the Syrian Golan Heights. Hyundai excavators were documented during construction works in the settlement of Halamish and in the Barkan Industrial Zone.

In previous years, the company was targeted by a BDS campaign supported the Palestine Peace and Solidarity in South Korea to stop complicity with Israeli home demolition. Yet, Hyundai equipment continues to be at the service of Israeli crimes and violations of International Law.

JCB,  Volvo, Caterpillar and Hyundai Heavy Industries and other international firms  have been playing a key role in advancing Israel’s settler colonial project in Palestine. Through providing the tools needed to replace Palestinian homes with Israeli ones, these companies resonate with the eliminatory logic of the racist Zionist movement. The eliminatory doctrine of Zionism was best expressed by Theodor Herzl, the father of Zionism in his allegorical novel, the Jewish State: “If I wish to substitute a new building for an old one, I must demolish before I construct.”

For these firms, codes of conducts and business ethics are only a lip service that are never enforced in their dealings with apartheid Israel. These companies and others must ensure that their equipment never end up in the hands of the Israeli military to commit the crime against humanity of apartheid.