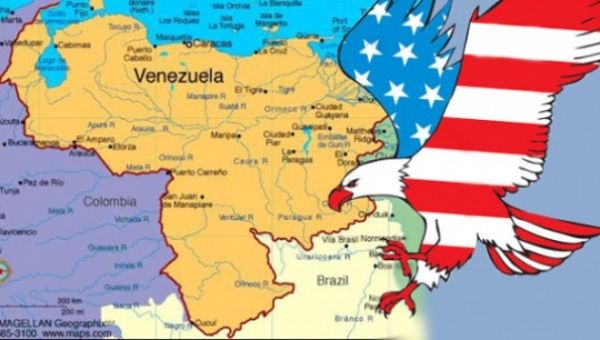 Who Is Behind The State Department’s Coup Plot In Venezuela?

Above Photo: These actions led by the United States lead toward one final aim: intervention by financial and preventive military means. | Photo: teleSUR

Creating a distorted image of the humanitarian crisis is the starting point. Painting a picture of a country on the verge of collapse is the alibi.

The coup plot against Venezuela has already been written and presented. On March 2, 2017, during the first round of OAS talks, Shannon K. O’Neil (Latin America director of the Council on Foreign Relations, CFR) presented the U.S. Senate Foreign Relations Committee with a portfolio of actions and measures to be taken by the United States if it wanted to remove Chavismo from political power in Venezuela.

Origin and Key Players of CFR

The Council on Foreign Relations, or CFR, is a think tank founded in 1921 with money from the Rockefeller Foundation. It is aimed at creating a group of experts to shape U.S. foreign policy and its leadership positions, including the president and the State Department, which does not act for its own reasons but rather according to the interests of these lobbyists.

Since it was created, the council, which is made up of 4,500 members, has placed a number of senior officials in positions to implement CFR strategy. These include Secretary of State Henry Kissinger, Madeleine Albright and Colin Powell, responsible for the war in Vietnam, Yugoslavia and Iraq respectively, and in the case of Powell, a major player in the April 2002 coup.

Moreover, an honorary member and ex-vice president of the think tank was David Rockefeller, the former owner of Standard Oil Company who has great interests and influence in Venezuela. His penetration in the country’s national political life reached such a point that he was one of the sponsors of the Punto Fijo pact that gave rise to the Fourth Republic.

Corporations born from the dissolution of Standard Oil also finance the CFR, namely Chevron and Exxon Mobil. The former was involved in financing the sanctions against Venezuela and the latter wants to create conflict between Guyana and Venezuela in order to take advantage of the large oil reserves in Essequibo.

Among CFR’s financiers is Citibank, which last year blocked the accounts of the Central Bank of Venezuela and the Bank of Venezuela, affecting the country’s ability to import essential goods. The financial corporation JP Morgan is responsible for using financial aggression as an excuse to declare Venezuela in default of payments in November 2016, using manipulative maneuvers to affect Venezuela’s financial credibility.

Both banks aimed to hurt Venezuela’s ability to attract investment and loans that would stabilize its economy. The most aggressive players of the financial and economic coup against Venezuela are part of CFR. These same players are now responsible for designing the agenda of the political coup — in the same way that Colin Powell, a CFR member, devised and armed the 2002 coup against Chavez when he was George W. Bush’s secretary of state. Now, just like then, the MUD (today called Democratic Coordinator) only responds to a political line designed by these large, factual powers — the real power that governs the United States.

Presentation to the United States Senate

For this reason, O’Neil is no more than a delegate of the royal leaders of this private organization. He is in charge of presenting to the Committee on Foreign Relations of the U.S. Senate the actions that must be taken to change the political course of Venezuela, using unconventional war tactics, as outlined by the interests of the great economic powers represented by CFR.

The audience begins by reporting, without solid and reliable figures, that the Venezuelan population currently lives on par or worse conditions than the citizens of Bangladesh, Republic of Congo and Mozambique, countries brought to extreme misery by private and irregular wars which sought to plunder their natural resources.

Creating a (media-distorted) image of the humanitarian crisis in Venezuela is the starting point for the rest of the plan. Painting a picture of a country on the verge of collapse is the alibi.

During the presentation, O’Neil said that the PDVSA is on the brink of default, omitting that the state oil company has continued to pay its external debt payments in honor of its international commitments. Before proposing these options to the U.S. government, the CFR delegate says that Venezuela is strategic for U.S. interests in the hemisphere, and that a hypothetical collapse in oil production would hurt the U.S. (because it would increase prices), while also affirming — without any proof — that the incursions of the Zetas and Sinaloa drug cartels in Venezuela poses a threat to the region.

Th CFR proposes three major political actions for the U.S. to execute a coup in Venezuela in the immediate future. Options that, because of the political and financial weight embodied in CFR, are already in full operation (and running for months). Indeed the CFR have directed the anti-Chavista leadership to strictly follow this coup manual.

1. CFR proposes to continue sanctions on “human rights violators, narco-traffickers and corrupt officials” to increase pressure on the Venezuelan government. Anti-Chavez leaders, following that script, have backed these actions and the false positive in question, since there is no evidence linking Venezuelan Vice President Tareck El Aissami to international drug trafficking. Even leaders like Freddy Guevara have gone to Washington directly to “demand” that the sanctions be extended, under the support of the anti-Venezuelan lobby led by Marco Rubio.

2. The United States must take a tougher stance within the OAS to implement the Democratic Charter against Venezuela, co-opting countries in the Caribbean and Central America to support this initiative, which in recent OAS (illegal) sessions have resisted supporting. Marco Rubio’s threat against Haiti, the Dominican Republic, and El Salvador was not an isolated action, but a coordinated maneuver led by the State Department to increase pressure against Venezuela’s international alliances.

The CFR also proposes that the Treasury Department convinces China to withdraw its support for Venezuela to increase political and economic pressure on the country and the government. The MUD has been a stellar actor in this part of the script, using Luis Almagro to demand the Democratic Charter be applied against Venezuela. The latest statement from the U.S. State Department on the march convened by the MUD on April 19, aims not only to harden its stance toward Venezuela to increase pressure from the OAS (trying to bring together the largest number of allies with this critique), but legitimizes, with premeditation, violent and lamentable acts that could occur in the march. Clinging to false narratives such as the use of “collectives” to suppress demonstrations and “tortures” carried out by Venezuelan state security forces, the State Department proposes calling April 19 a turning point to escalate the siege against Venezuela and expand sanctions against the country, making them more aggressive and direct.

3. The CFR states that the United States should work together with Colombia, Brazil, Guyana and Caribbean countries to prepare for a possible “refugee increase,” channeling resources to various NGOs and U.N. organizations from the United States Department of Agriculture State. But beyond this warning of an intervention in Venezuela, there is a real political operation in place: the NGO funded by the same Department of State, Human Rights Watch (HRW), published today, April 18, 2017, a report on how the “humanitarian crisis” has spread to Brazil. Based on specific testimonies and by magnifying immigration data, HRW took the opportunity to call on the governments of the region (with special emphasis on Brazil) to put pressure on the Venezuelan government, as required by the strategy proposed by CFR. Luis Florido, leader of Popular Voluntad, is currently touring Brazil and Colombia to try to reactivate the diplomatic siege against Venezuela from border countries.

The U.S. think tank also requires that these countries under the leadership of the United States and the International Monetary Fund (IMF) organize a financial guardianship plan for Venezuela, that hides Russian and Chinese investments in strategic areas of the country. In recent days, Julio Borges has used his role in parliament and as a political spokesperson to continue the message that propagates the false narrative of the “humanitarian crisis” in Venezuela. It is the same strategy outlined by the CFR, arguing that the United States should increase its level of involvement in the internal affairs of Venezuela from the State Department, now headed by Rex Tillerson, linked to oil company Exxon Mobil (he was its general manager since 2007 until he took over this public position), a CFR financier.

Where the Opposition Leaders Come into Play

These ongoing actions, while unveiling the geopolitical urgency in the coup strategy against Venezuela (affiliated with the latest statements by U.S. Southern Command Chief Admiral Kurt Tidd on the need to displace China and Russia as allies of Latin America), also reflects how they have delegated the generation of violence, programmed chaos and diplomatic procedures (in the best of cases and exclusive use of Luis Florido) to their intermediaries in Venezuela, specifically, the leaders of the radical parties of anti-Chavism. These actions led by the United States (and corporations that manage its foreign policy) lead toward one final aim: intervention by financial and preventive military means.

How to Justify Intervention

The evidence presented by President Nicolas Maduro links leaders of Primero Justicia with financing vandalism against public institutions (the case of the TSJ in Chacao). What, beyond this specific case, reveals the very probable promotion of para-criminal, irregular and mercenary (allied and politically directed) factors to escalate and encourage violence in order to legitimize the position of the State Department.

The badly named MUD is a private embassy that works on the basis of the great economic interests of these factual powers, which are vital for its strategy to advance. Whether these strategies can keep pace with this global moment will depend on what their supporters can do on the ground. Given the resources of financial and political warfare applied by these powers (financial blockade, international diplomatic siege, programmed attack on PDVSA payments, etc.) and State Department maneuvers, are on their account, generating all the conditions of Pressure, siege and financing needed by its operators in Venezuela for the much-announced breakpoint that does not finish arriving.

And that it is necessary that it arrives for those who financed and designed this agenda.

Despite the tactics of the financial and political war (financial blockade, international diplomatic siege, programmed attack on PDVSA payments, etc.) and the maneuvers of the State Department, made on its behalf, to generate all the conditions of pressure, siege and investment needed by their Venezuelan operatives, the highly anticipated breaking point in Venezuela has still not arrived.

But for those who financed and designed the agenda against Venezuela, it is important this point come as soon as possible.