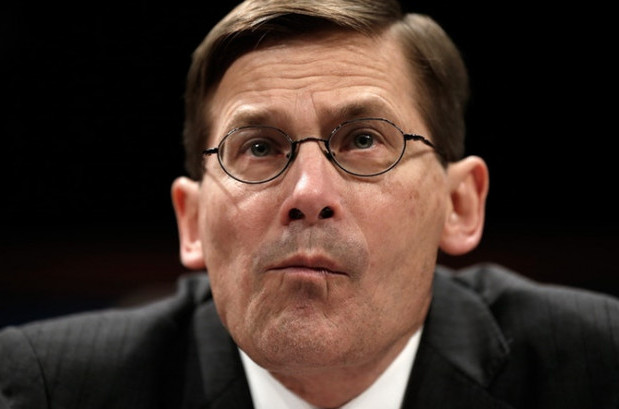 Chelsea Manning’s appointment to the Harvard JFK School had a positive side effect: Former CIA director Mike Morell quit in protest, saving students from being lectured to by  a war criminal who rationalizes his support for drone killings, torture, mass surveillance, murder and war crimes. Morrel is now calling on the CIA to kill Iranians and Russians in Syria and, advocates for torture and drone killings and he endorsed Hillary Clinton for president.

It is good to see Chelsea Manning having a positive impact after her release from prison, where she never should have served a day, as exposing war crimes deserves a medal not prosecution. I served on the Chelsea Manning Support Committee and only wish she would have been released earlier.

In making the appointment the JFK School explained:

“Chelsea E. Manning is a Washington D.C. based network security expert and former U.S. Army intelligence analyst. She speaks on the social, technological and economic ramifications of Artificial Intelligence through her op-ed columns for The Guardian and The New York Times. As a trans woman, she advocates for queer and transgender rights as @xychelsea on Twitter. Following her court martial conviction in 2013 for releasing confidential military and State Department documents, President Obama commuted her 35-year sentence, citing it as ‘disproportionate’ to the penalties faced by other whistleblowers. She served seven years in prison.”

UPDATE: Harvard rescinded its fellowship for Manning, citing it as a “mistake.”

Michael Morell, a former CIA deputy director, resigned from his Harvard fellowship because the university appointed Chelsea Manning to one as well. Harvard announced on Wednesday Manning would be added as a fellow to the school’s John F. Kennedy School of Government, citing her network security expertise and activism for transgender rights on Twitter. In response, Morell sent a letter of resignation to Kennedy School Dean Douglas Elmendorf that read:

I cannot be part of an organization — The Kennedy School — that honors convicted felon and leaker of classified information.

Manning served seven years in prison after being convicted in 2013 for releasing confidential military documents and sentenced to 35 years in prison. She was pardoned by former President Barack Obama in January.

In his resignation, Morell, who was twice acting director of the CIA, said he believes the country should “stand up against any efforts to justify leaks of sensitive national security information.” He wrote:

Senior leaders in our military have stated publicly that the leaks by Ms. Manning put the lives of U.S. soldiers at risk. As an institution, the Kennedy School’s decision will assist Ms. Manning in her log-standing efforts to legitimize the criminal path that she took to prominence, an attempt that may encourage others to leak classified information as well.

In his resignation letter, Morell noted Manning, who was first arrested in 2010, was “found guilty of 17 serious crimes, including six counts of espionage.” 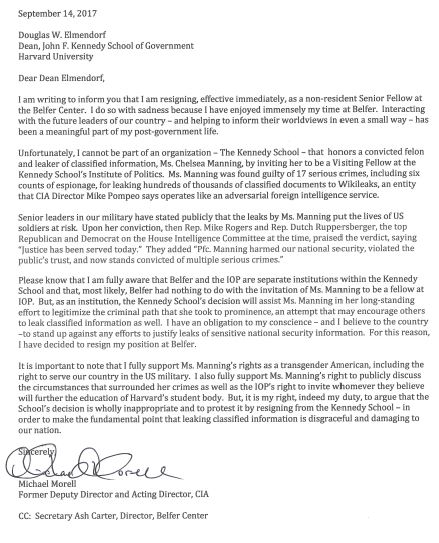 Morell was a fellow at Harvard’s Belfer Center, while Manning is set to become a visiting fellow at Harvard Kennedy School’s Institute of Politics. Morell did acknowledge this, saying, “Please know that I am fully aware that Belfer and the IOP are separate institutions within the Kennedy School and that, most likely, Belfer had nothing to do with the invitation of Ms. Manning to be a fellow at IOP.”

Manning will be joined as a visiting fellow by former White House press secretary Sean Spicer, and is the first transgender individual to be named a Harvard fellow.

In his resignation, Morell wrote, “It is important to note that I fully support Ms. Manning’s rights as a transgender American, including the right to serve our country in the U.S. military.” He also said he believes Manning has the right “to publicly discuss the circumstances that surrounded her crimes as well as the IOP’s right to invite whomever they believe will further the education of Harvard’s student body.”

Morell said his resignation would be effective immediately. “I do so with sadness because I have enjoyed immensely my time at Belfer. Interacting with the future leaders of our country — and helping to inform their worldviews in even a small way — has been a meaningful part of my post-government life,” Morell wrote.

Since being released from prison, Manning has become a vocal advocate for transgender rights, writing columns for The New York Times and being active on social media.

In concluding the letter, Morell said, “It is my right, indeed my duty, to argue that the School’s decision is wholly inappropriate and to protest it by resigning from the Kennedy School — in order to make the fundamental point that leaking classified information is disgraceful and damaging to our nation.”

Manning’s lawyer, Nancy Hollander, also responded to Morell’s resignation, telling NBC that Manning’s appointment to the Harvard fellowship is “terrific for Chelsea and for Harvard and for the students,” adding, “Of course she’s not posing harm to anybody anywhere. She did a public service.”