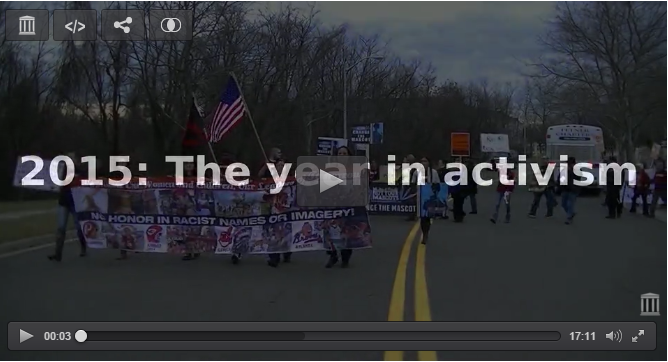 Who Says They Don’t Protest In DC: Protest Year In Review

Below is a month-by-month video review of activism, primarily in the Washington, DC region.  If you think there are no protests in DC this video will disabuse of that thought.

In fact, it was a busy year of protests on a wide range of issues. If these videos were shown on the commercial media or covered regularly by the corporate press it would look like the United States was in revolt. Luke who made the video is based in DC but he cannot cover all the protests that go on here. For example, few protests inside of Congress are included in this video, even though there have been many.

Highlights of the past year include Black Lives Matter, the Baltimore Uprising, the TPP, the Pope, the climate protests and more. Below the video is a list of the protests covered by Luke, a DC independent media maker.

Luke is primarily covering DC-area protests. In reality, many cities across the country have regular protests on the economy, climate, racism, wars, low wages and more. In the last couple of years as pipelines and other carbon infrastructure is being put in place we are also seeing protests outside of urban areas.

When we are in the midst of the struggle, even if we are aware of many protests, we often can still not see how active the movement for economic, racial and environmental justice is.

Protesters dragged out of corporate event at COP21 by undercover cops
Protest deters, drives off “deer removal” in Rock Creek Park for night
Bike Party in the Mass ave tunnel
People’s Climate rescue brings rescue raft to White House
Koran-burners shut down at the White House
Rally against killer security guards at Marbury Plaza in Anacostia
Anacostia residents protest at slumlord’s home over illegal attempts to evict Congress Heights
Homeless Memorial March with casket remembers 41 who died this year on the streets of DC
Get ready for 2016!