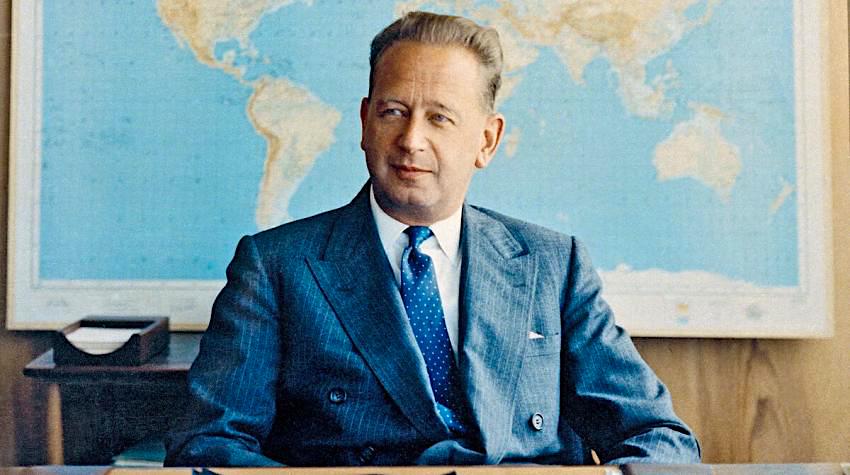 Who Was Dag Hammarskjöld?

Through his independence, Hammarskjöld had managed to anger both Cold War camps.

Dag Hammarskjöld set the standard for integrity and independence that all United Nations secretaries-general are judged against. He pioneered direct diplomacy by a secretary-general to defuse crises, and created U.N. peacekeeping. Hammarskjöld forged an independence between the Cold War powers that upset both and may have led to his death 60 years ago on Saturday.

The son of a Swedish prime minister, Hammarskjöld came from a privileged background, unlike the Socialist Trygve Lie, the first secretary-general. Hammarskjöld became a lawyer, an economist, Sweden’s finance minister and was a delegate to the Paris Marshall Plan conference.

Hammarskjöld was surprised to be chosen as Lie’s replacement. He was acceptable to both blocs, as he was seen as an apolitical technocrat. He turned out to be anything but. A deeply introspective man, Hammarskjöld turned the tables and surprised the Cold War powers. Hardly the malleable man they thought they were getting, Hammarskjöld took the principles of the U.N. Charter a little too seriously for their liking.

“The right of the Secretariat to full independence, as laid down in the Charter, is an inalienable right,” he said shortly after his election. The U.N.’s purpose, he said, was not to submit to the major powers but to seek  “solutions which approach the common interest and application of principles of the Charter.”

As decolonization was getting underway, Hammarskjöld said newly independent nations “… can find assistance” from the U.N., “…in whose forums they can engage as equals with the more advanced nations in the search for the values which are of common concern to all civilized men.” Hammarskjöld tried to put his words into action despite the risks. He pioneered the role of the Secretary-General as mediator in disputes between nations.

His first attempt, to bring peace between Jordan and Israel, failed. But late in 1954 he wrote to Chou En-lai asking for a meeting to win the release of 11 U.S. POWs from the Korean War. Hammarskjöld appealed to his  “independent responsibilities as Secretary General” which he said derived from the Charter and not from any U.N. resolution.

Beijing had been passed over as a U.N. member in favor of Taiwan, which lost the Chinese civil war. Nevertheless, Chou agreed to see Hammarskjöld in what was the first diplomatic mission by a Secretary-General of its kind. In the end, Hammarskjöld got the 15 U.S. airmen released.

He used his independent offices on several other occasions to “distance himself from undiplomatically formulated [U.N.] resolutions,” a stark declaration of independence. He openly criticized the U.S. overthrow of the democratically-elected government in Guatemala in 1954. During the Suez Crisis, Hammarskjöld threatened to resign if his independence was not respected.

“The discretion and impartiality required of the Secretary-General may not degenerate into a policy of expedience,” he said. “He must also be a servant of the principles of the Charter, and its aims must ultimately determine what for him is right and wrong. For that he must stand.”

Hammarskjöld defused the 1958 Lebanese crisis when in Cairo he got Egyptian President Gamal Abdel Nasser to cut off arms deliveries to Lebanon from Syrian territory in the United Arab Republic.

Hammarskjöld’s most controversial initiative was in Congo from July 1960 until his death on Sept. 18, 1961. He had visited 21 African countries in two months (in Dec. 1959 and Jan. 1960) and increasingly promoted African nationalism, annoying the remaining colonial powers on the continent. When Belgium granted Congo independence, the mineral-rich Katanga Province refused to go along. Hammarskjöld was committed to a unified, independent country and engaged in direct diplomacy.

On his request, the Security Council demanded Belgian troops leave the Congo and later the U.N. deployed a force of 20,000 men. After Congo’s first prime minister, Patrice Lumumba, threatened to ask for a Soviet force if the Belgians weren’t ejected in 48-hours, the U.N. eventually succeeded in getting all Belgian military to leave Congo, including from Katanga.

But Lumumba was dissatisfied that the U.N. troops would not fight to put down Katanga’s separatism. The Soviets then demanded that Hammarskjöld resign because they said he’d shown “bias against socialist countries” and accused him of supporting colonial forces to fix “a new yoke on the Congo.” U.N. troops eventually began combat operations against the separatists.

Meanwhile, the Americans, Britain, Rhodesia and apartheid South Africa were alarmed by Hammarskjöld’s backing of a unified Congo and African nationalism generally. The CIA was particularly concerned that Katanga’s uranium, which had been used in the Hiroshima and Nagasaki bombs, would fall into Soviet hands.

Through his independence, Hammarskjöld had managed to anger both Cold War camps.

Moscow wanted him to resign to be replaced with three men to head the U.N.: one to represent the East, one the West, and the other developing nations. Hammarskjöld answered Russia’s charges on Oct. 3, 1960. He told the General Assembly: “It is very easy to resign. It is not so easy to stay on. It is very easy to bow to the wishes of a Big Power. It is another matter to resist.”

While flying to see the Katangan leader a year later to negotiate a ceasefire with U.N. troops, the Secretary-General was killed when his plane crashed just before landing at Ndola airport in then Northern Rhodesia. A 2011 book by British researcher Susan Williams led to an independent commission and a U.N. inquiry, which have shown that many eyewitnesses saw a second plane firing on Hammarskjöld’s airliner.

The Commission speculated that the CIA and British intelligence may have played a role in the assassination. Hammarskjöld’s tenure coincided with the depths of U.S. covert action, including coups and assassinations, under CIA director Alan Dulles. In Hammarskjöld’s first year, the U.S. and Britain overthrew a democratically-elected government in Iran, and in the following year did the same in Guatemala.

Hammarskjöld’s condemnation of the latter was clearly stepping out of line.

The movement Hammarskjöld helped champion in the 1950s was realized the next decade when dozens of African and Asian countries gained at least nominal independence from their colonial masters. These new nations expanded the General Assembly from 54 members in 1950 to 110 by the end of the 1960s.

With the Security Council still paralyzed by Cold War rivalry, the General Assembly became the center of U.N. activity. The Assembly reflected worldwide rebellion against colonialism’s vestiges, South African and the American South’s apartheid, the Cold War powers’ domination, U.S. covert and military intervention in developing nations, the rise of U.S.-dominated global corporations, dictatorships, the repression of women and the unresolved Palestinian conflict.

The first assertion of Third World independence was the founding of the Non-Aligned Movement on Sept. 6, 1961, twelve days before his death. Hammarskjöld’s natural neutrality lent itself to the movement’s goals. He’d relied on neutral nations for most of his peacekeeping troops and proven his defense of the Charter as a protection for all people’s interests.

Hammarskjöld was awarded the Nobel Peace Prize posthomously. President John F. Kennedy called him the “greatest statesman” of his era.