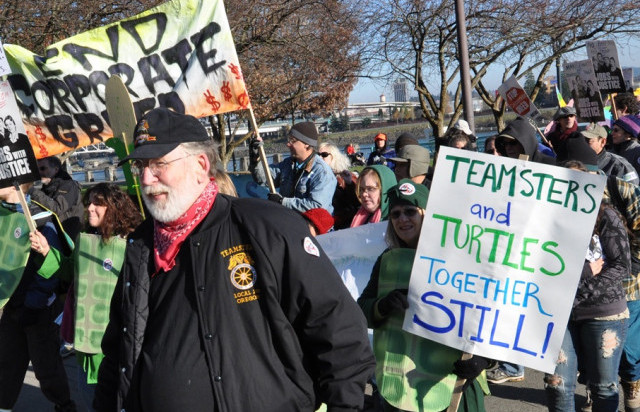 Who Will Stand Up To Trump? We Will!

Above photo: By Bette Lee at TalkingUnion

“The president-elect is the most dangerous man in America. The question now, for which there is as yet no answer, is: Who will stand up to him?” — Michael A. Cohen, Boston Globe, December 8, 2016We the people will stand up to Trump. Not Cohen’s list of politicians and leaders who have been benefiting from the corrupt system that put Trump in power. The post-inauguration chaos could well take America and the world into uncharted territory, so creating a strategy on how to transform America into a sustainable, post-capitalist society will take imagination.

Beware of groups seeking to hijack the anti-Trump movement for their own benefit. You can become disheartened if you spend energy supporting an organization only to discover that the group, presenting itself as the “vanguard of the revolution” or as a well intentioned (and well financed) reform organization, is more interested in its own well-being, in “organization building,” than in transforming society. A lot of these groups will try to recruit you as the crisis deepens, but you don’t need them. There are things we ourselves can do to prepare, to fight back.Forming affinity groups is an important first step. An affinity group is simply a voluntary group formed around a common goal or interest. Such groups typically have five to ten participants who meets at least once a month, sometimes as much as several times a week. An affinity group provides a space for discussing tactics, strategies, and specific actions. It also provides a place to work cooperatively on projects. Importantly, it also serves as a means of mutual support and validation, a means of overcoming the crushing isolation that keeps people alone, disempowered, and hopeless; it can provide inspiration and stir the imagination in these dark times.The longer a group works together, the more trust and strength it will have. Many affinity groups are organized in a non-hierarchical manner, often using a consensus decision making process, and are frequently made up of trusted friends. Affinity groups provide a means of organization that is both flexible and decentralized, and that makes it easy for like-minded groups to coordinate their activities. As an example, the affinity group structure is very valuable in organizing nonviolent direct actions and protests. This process/structure was often used in nonviolent direct actions against the US War on Vietnam, and even more so in the 1970s in anti-nuclear campaigns. Possibly the most successful example using the affinity group model was the shutting down of the World Trade Organization Summit in Seattle in November of 1999.A number of affinity groups can be formed into what activists call “clusters.” For example, in the effort to stop the Seabrook Nuclear Power Station in New Hampshire, clusters formed in geographic locations such as Boston, North Shore, and so on. All participating affinity groups would send representatives to cluster meetings, and any decisions they made then had to be approved by participants in the member groups.For large actions, cluster representatives would meet at a spokes council to adopt or reject proposals advanced by affinity groups. This can be challenging, but if all involved seek to come to consensus on clear, simply articulated proposals, it can work, and it did work.Where this process fails is when large groups try to come to consensus on every minor matter. We saw this problem often during the Occupy Wall Street movement. Detailed discussions of minor things is better kept at the affinity group level, or, even better, are best left to work groups. An example would be food procurement and preparation at large gatherings and actions, which is usually delegated to Food Not Bombs or other work group.In preparation for the blockade of the World Trade Organization Summit in Seattle, a coalition of affinity groups called the Direct Action Network (DAN) published a “Common Agreements” document. It asked that, no matter what their views on nonviolence as a tactic or strategy, participants honor the agreement during the time of the action. The Common Agreements were: ”Refrain from violence, physical or verbal; not to carry weapons, not to bring or use illegal drugs or alcohol, and not to destroy property.”Nonviolent direct action preparations were really important in the success of the blockade. Author and activist Star Hawk wrote of the preparations saying:

“In the weeks and days before the blockade, thousands of people were given nonviolence training — a three hour course that combined the history and philosophy of nonviolence with real life practice through role plays in staying calm in tense situations, using nonviolent tactics, responding to brutality, and making decisions together. Thousands also went through a second-level training in jail preparation, solidarity strategies and tactics and legal aspects. As well, there were first aid trainings, trainings in blockade tactics, street theater, meeting facilitation, and other skills.”One possible reason the direct actions to stop the Dakota Access Pipeline at Standing Rock succeeded (at least for now) is that the Native American elders had a common agreement worded much like that used during the WTO protests in Seattle, and that they asked everyone interested in participating to take a three-hour Nonviolent Direct Action Preparation.There are several resources to help organize nonviolent direct action preparation in your community. One is “Preparation for Nonviolent Action” posted on the Vernal Project website. The War Resisters League website has a good resource, “Nonviolence Training: Nonviolent Action Preparation 4 to 5+ hour agenda.”  And there may also be experienced facilitators in your community who can help with nonviolence training, but you can also organize your own nonviolence preparations.If thousands of us dedicate ourselves to forming affinity groups and organizing nonviolent direct action preparations, it could provide a solid foundation for opposing whatever Trump and corporate capitalism will deliver.

Keith McHenry, Food Not Bombs Co-founder and author of Hungry for Peace and The Anarchist CookbookNo matter what horrors the Trump period brings, we need to prepare for a long struggle. Don’t mourn, organize!