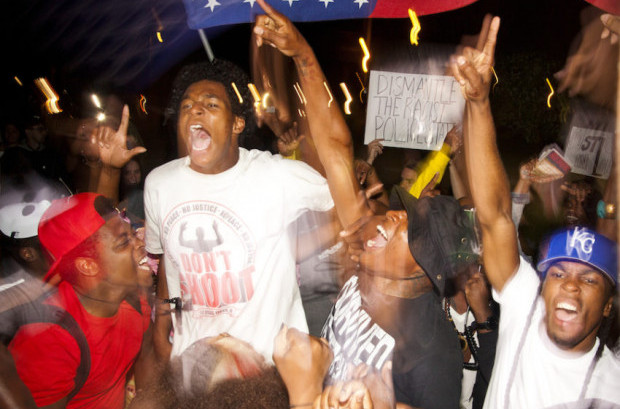 Above Photo: A scene from the new documentary “Whose Streets?” about the rise of social justice activism in Ferguson, Mo. (Magnolia Pictures)

On Aug. 9 three years ago, unarmed teen Michael Brown was shot dead by Officer Darren Wilson in Ferguson, Mo. The killing took place under disputed circumstances, and Wilson was never charged for the shooting. In the days that followed, peaceful demonstrators were met by a military show of force that escalated into violence, mayhem and looting. “A riot is the language of the unheard” is Martin Luther King Jr.’s answer to those who ask why the disaffected don’t pursue justice through established channels.

“Ain’t no Constitution in Ferguson,” says a protester in the gritty new documentary “Whose Streets?” as he ponders Barack Obama’s days as a constitutional law professor. “Tell that n—– he needs to teach a new class and bring his ass to Ferguson, Missouri, and tell us why there ain’t no Constitution.”

While a wide majority of protests in the wake of Brown’s killing were peaceful, the media focused on looting and destruction of property. In the eyes of the public, the images shown on TV rationalized the militarization of police forces, newly fortified after the Department of Defense 2013 decision to provide surplus MRAPs (mine-resistant ambush protected military vehicles), bayonets, grenade launchers, assault rifles and other tactical weapons to local law enforcement. The new-look cops only heightened tensions, sparking the very unrest they were meant to mitigate.Using existing footage from participants and news outlets, as well as footage of their own, activist Sabaah Folayan and St. Louis artist Damon Davis tell a story the mainstream media mostly neglected. Their directorial debut is a poignant portrait of a community under siege, as well as an inspirational call for social justice.

The subjects of “Whose Streets?” are the faceless people who make up “the mob” in the shadowy background behind CNN journalist Don Lemon. While the filmmaking could be a little steadier, it doesn’t undercut the immediacy and necessity of what the film has to offer—a voice to the guys at the barbershop and the people at the town hall meeting, the single mom getting her little girl to school, a woman wondering why some stranger in a uniform is telling her she can’t cross the street to get her car in a neighborhood she’s lived in all her life.

A week after Brown’s murder, on Aug. 16, Missouri Gov. Jay Nixon declared a state of emergency and a curfew. Two days later, he called in the National Guard. In the first month of unrest there were about 400 arrests, and hospital attention was required by 20 civilians, including one shot by police, who claimed the person was armed.A refrain runs throughout the film that Ferguson police are especially tough on African-Americans, a gripe borne out by the U.S. Justice Department’s 2015 report on the subject. It concluded that the Ferguson Police Department was motivated by a desire for revenue increases rather than public safety needs, and that a “disproportionate number of arrests, tickets and use of force stemmed from ‘unlawful bias.’ ”

In the same period, estimated damage totaled $5 million, with the blazing QuikTrip store accounting for roughly $1.5 million of it. Although it was the only building torched in the standoff, it featured prominently in media coverage. One reason might be the estimated 238 journalists who sourced the story mostly from police spokespeople.

“Where the fucking cameras now?” asks an angry young woman in the film, her eyes burning with tear gas. “KSDK, KMOV, CNN, MSNBC, I’m calling all you motherfuckers out!” Folayan and Davis’ cameras are focused on Brittany Ferrell, a nursing student and mom to little Kenna. After Brown’s killing, Ferrell met her partner-to-be Alexis Templeton at a demonstration. Soon Ferrell dropped out of school, the two got married, and they co-founded Millennial Activists United.

A father and teacher, Tory Russell dedicates his time to leading marches and serving the community with a Books and Breakfast program. Kayla Reed left her job as a pharmacy technician to take to the streets full time. “This ain’t your daddy’s civil rights movement,” a protester yells at the camera.David Whitt is a family man with four small children. He watched the police raise a curtain around Brown’s body as it lay on the street for four hours in the summer heat. In the days after the murder, that spot became a memorial erected by the neighborhood, with Whitt as self-appointed custodian. On the morning of Sept. 23, his camera captured the scene as a mysterious fire consumed the memorial. Whitt and other activists were eventually evicted from their homes for their counter-surveillance of police.

“Whose Streets?” opens with a reminder of the Dred Scott decision, which began in a Missouri court in 1846. Scott, a slave, sued for his freedom and lost because his skin color denied him citizenship and therefore access to the courts. It’s an apt metaphor for a community that police and courts have systematically victimized. “We don’t do this because we hate the police,” a young woman tells the camera. “We do this because we love each other.”

Near the end of the documentary, Brittany Ferrell is arrested during a protest. Charged with felony property damage, she faced jail time but got five years of probation instead. This came as a relief to daughter Kenna, already a veteran demonstrator.

“We have to raise a generation of activists,” says Ferrell. “That’s the only way it’s going to change.”