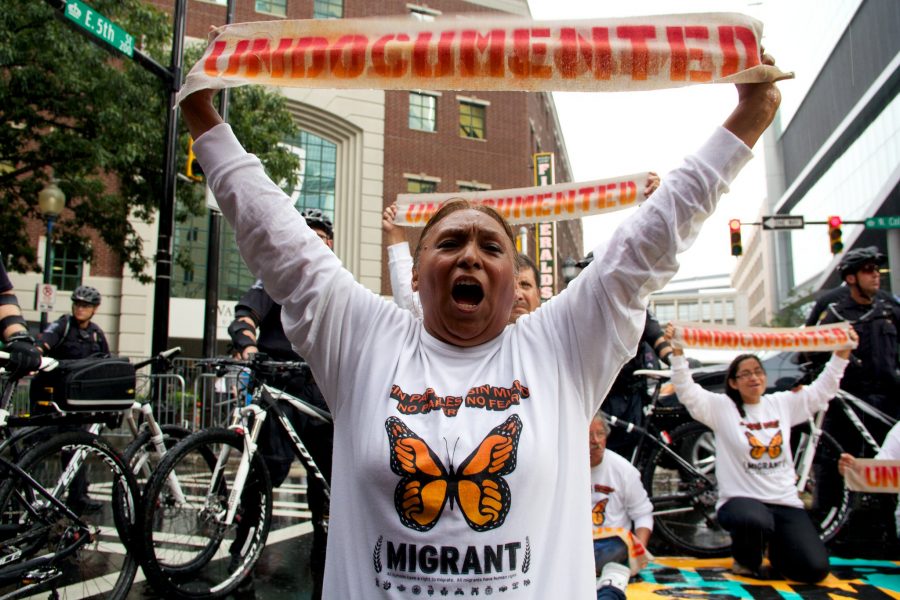 Above Photo: Participants in the Undocubus demonstrate at the Democratic National Convention in Charlotte, North Carolina, on Sept. 4, 2012. Flickr/yashmori.

The authors of a new book on artistic activism discuss the importance of fighting on the terrain of popular culture to reach a mass audience.

In a new book, an artist and an academic share their experiences in bringing about social change by integrating the emotive power of the arts with the practical efficacy of strategic activism.

“The Art of Activism: Your All-Purpose Guide to Making the Impossible Possible” by Stephen Duncombe and Steve Lambert compiles knowledge the authors have gleaned from training hundreds of activists and artists around the world over the last 12 years. Their main message? Because today’s political terrain is one of signs, symbols, stories and spectacles, activists must learn to operate in that cultural space if they hope to change the world.

Although a free companion workbook is available for those looking to sharpen their practical skills, “The Art of Activism” is more than a nuts and bolts “how-to” guide. Duncombe and Lambert also deliver thought-provoking discussions on the theoretical underpinnings of artistic activism, drawing on fields as diverse as marketing, cognitive science and pop culture. To help clarify theories and inspire creativity, the book is packed with a diverse selection of case studies.

One of the first examples presented in the book provides a glimpse into what artistic activism can look like. In 2012, some immigration activists collaborated with a group of artists in a project aimed at changing the public perception of migration. The undocumented immigrants symbolically channeled the freedom rides of the civil rights movement by traveling around the southern U.S. in an old bus they dubbed the Undocubus.

But the group added creative power to the action by employing a new image of their own — the monarch butterfly. Everyone loves butterflies, and the monarch was a perfect symbol because it freely migrates thousands of miles each year through Canada, the U.S. and Mexico. To make the connection, the Undocubus was painted with bright images of monarch butterflies, and participants wore butterfly wings and colorful monarch T-shirts when they stopped for events.

Associating human migration with the beauty and freedom of butterflies offered a different way for the public to perceive undocumented people, potentially opening minds and hearts. This is the message the authors are trying to convey in “The Art of Activism” — by harnessing the emotional power of art, artists and activists can impact cultural values and ultimately transform the political landscape.

Stephen Duncombe and Steve Lambert are founders of The Center for Artistic Activism. Duncombe has a PhD in Sociology and is a Professor of Media and Culture at New York University. Lambert, who created the book’s many helpful (and sometimes humorous) illustrations, is an Associate Professor of New Media at SUNY Purchase. His art projects have been exhibited internationally.

I recently spoke to the authors about some of the ideas explored in the book and how they can help activists design more creative campaigns.

What’s the target audience for this book?

But a lot of this is for the person who’s like, “You know what? I’m really pissed off about the world as it is right now and I want to get engaged. How should I do that? And how can I do it in a way that actually feeds into my creativity, as opposed to making me feel like I’m eating a lot of spinach?” We’re pro spinach, don’t get me wrong.

You invented the term “æffect,” which seems to be a central concept in your approach to artistic activism. Can you explain what it is?

Duncombe: Yes. The key for us in thinking about arts and activism is to acknowledge that they do different work in the world. Art is really all about affect, which tends to be a sort of emotional charge. We say art moves us, and we often can’t explain how art moves us. That’s exactly what describes affect. But activism is about creating demonstrable material transformations in the physical world, in the political world and the structural world.

What any good social change activity needs is both of these, and this has been true for thousands of years. People are moved to act in the world in order to transform it. We got really interested in this notion of how do you combine affect and effect, because we think that’s what artistic activism does. So we came up with this idea of affect of effect. And then Steve came into my office one day and said, “I’ve got an idea.”

Duncombe: It’s a useful word because we keep returning to these questions: Is it working on this level? And is it working on that level? The answer needs to be yes for both of those in order for it to be an æffective, and therefore impactful campaign, strategy or tactic.

Aren’t you just talking about political art? Can you explain the difference?

Lambert: So there’s art about politics. You can have art that has political subject matter. But what we’re talking about is art that’s trying to impact power, that’s trying to work politically, and I think the first thing to understand is that those are different things.

Duncombe: And one of the great things that happens when you start to switch your focus from art that is about politics, to art that works politically, is it opens up the terrain of possibility of what artistic activism could be. That is, it can be non-representational. But the key thing is this: Is politics the subject matter of your work? Well, that’s political art. If your art works politically, that’s something different. That’s artistic activism.

The book opens with a discussion about getting people to step off the curb. Explain what you mean by that, and what gets people to do it.

Lambert: We hear incredible stories from people about their experiences, often when they were young. All of them involve some sort of powerful emotional experience. They’ll say, “I watched discrimination against my mom in a store for being Muslim. And I thought, why is this happening? I felt this combination of shame and anger.”

Duncombe: When we point this out to people, you get this aha moment. Because no one talked about signing a petition or getting radicalized by reading a flyer. Instead, they relate these incredibly emotional and experiential and affective experiences. We start to talk about how we tap into that as activists.

In the book you talk about making use of pre-existing cultural forms like stories and symbols. Doesn’t this just serve to reinforce the status quo?

Duncombe: On the one hand, you have to be able to speak in a language that people understand, and that means using symbols that they understand, using narrative forms they understand. Because otherwise, you’ll never be able to reach them. They’ll close their ears to you. You’ll sound like gibberish to them.

And so, one of the first things we talk about is to learn how to tell good stories. In order to tell good stories, you have to listen to the stories people are telling themselves and try to fit your politics into their stories. But there’s a problem with that. Sometimes we’re trying to radically re-imagine reality, which means we need to tell stories that are unfamiliar. We need to be able to use signs and symbols that are profoundly unsettling.

Like so much stuff in artistic activism, it’s a balancing act. On the one hand, you want people to understand it, you want it to be legible. On the other hand, we want to push the boundaries of legibility in order to bring people into new realities and new perspectives and ways of understanding the world.

You advocate a kind of appropriation of certain aspects of pop culture. Shouldn’t activists be rejecting something so superficial and commercialized?

And some of those core values we’re going to reject. People want to be rich and famous. We can’t do anything with that. People are attracted to fame and want to be noticed. Oh, we can do something with that. How do we build into some of our politics the popular desire of people wanting to be noticed? Well, what does a meeting look like when you acknowledge that people want to be heard and recognized? And what does a protest look like that actually forefronts the audience as opposed to just one or two people on a stage?

We use pop culture as a way to get artists and activists out of their bubble and get them engaged in the world. It’s a way to get a blueprint of popular desires and fantasies and nightmares, and figure out how we can use some of that for our own purposes.

Lambert: Not understanding popular culture means that you have fewer points of connection with everyday people. It’s a huge resource and inspiration when you can figure out those underlying desires. It’s just an endless, rich pool to get ideas from.

Duncombe: As an activist or an artist who wants to do social change, I don’t care if you don’t like it. You’ve got to know it. We’re not asking you to like it. We’re asking you to study it and know it. When you go into a campaign, you try to figure out a power map — who’s got the power to make the decisions that can transform something. But this is a cultural power map. You have to be able to read the cultural terrain because so many of our battles are being fought on this cultural terrain. Pop culture is a great way into that.

Is there anything you can single out that you would want activists to take away from this book?

Duncombe: Activists can’t afford to not become artistic activists. We like to say that the first rule of guerilla warfare is to know your terrain. The political topography of today is one of signs and symbols and stories and spectacles. And in order to navigate in that terrain, you’ve got to be able to work in this medium. Not because you like it; not because you’re good at it, but because if you’re going to be a good activist, you have to be able to do it. And that’s absolutely key.