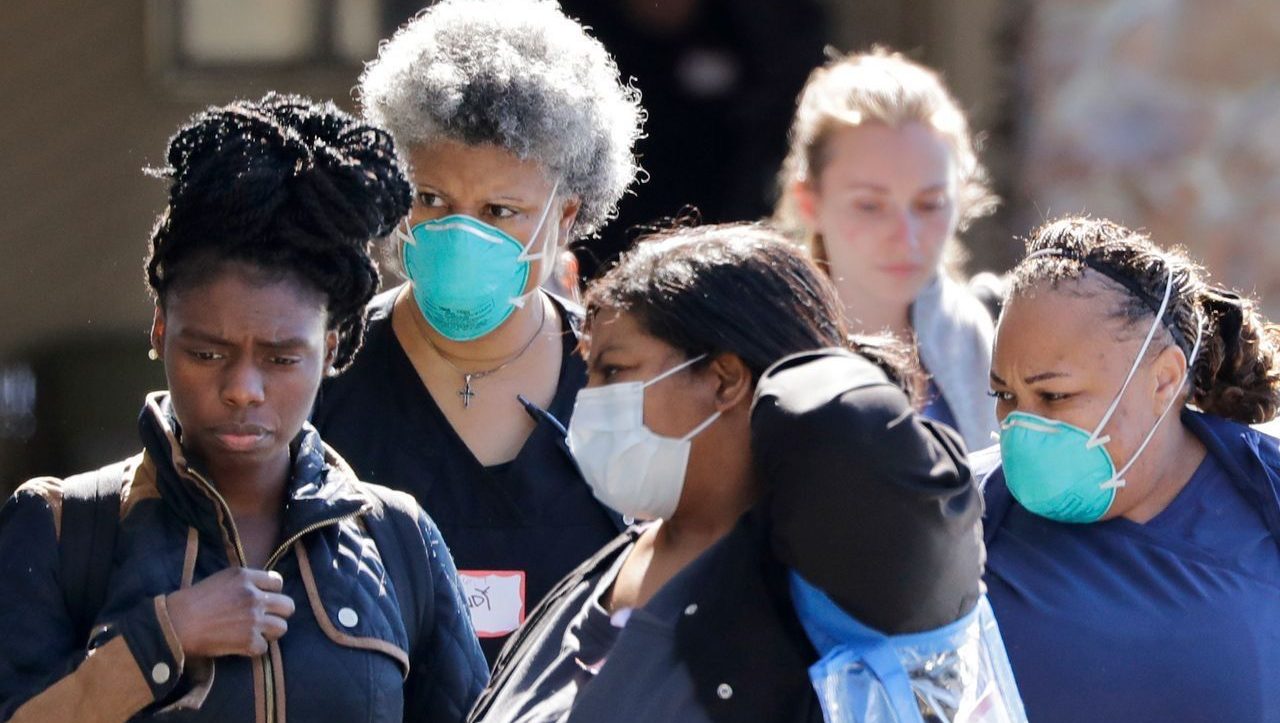 Why Are Millions Of People In The US Traveling For Thanksgiving?

Above photo: Workers walk out wearing protective gear as they leave for the day on a shift change at Life Care Center earlier this year in Kirkland, Wash., near Seattle. AP Photo/Elaine Thompson.

A record 203,000 Americans tested positive for COVID-19 on Friday, and the seven-day average is above 170,000. Despite significant advances in treating the disease, more than 1,500 people are dying every day, the highest level since May. The Centers for Disease Control and Prevention (CDC) predicts that the US will record 300,000 deaths by the middle of December, and there could be as many as 21,000 new coronavirus hospitalizations each day.

The CDC has issued a severe warning against traveling for Thanksgiving, one of the busiest travel weeks of the year. It recommends that people restrict their dinner plans to those who live in their households in order to limit the further spread of the virus.

“The tragedy that could happen is that one of your family members is coming to this family gathering and they could end up severely ill, hospitalized or dying. And we don’t want that to happen,” Dr. Henry Walke, the CDC’s COVID-19 incident manager explained at a press conference last week.

Under these conditions, many people are choosing not to travel. The number of people flying for Thanksgiving is down by more than half from last year.

However, the Transportation Security Administration reported that more than three million people passed through airport security checkpoints between Friday and Sunday, making it the busiest travel weekend since March, when restrictions and lockdowns were implemented to control the COVID-19 pandemic. Crowded security lines snaked through terminals as travelers packed onto airplanes to head home to see their families.

All told, the American Automobile Association projects that 50 million people will travel by car, air and rail throughout the United States during the Thanksgiving holiday period stretching from November 25 through November 29. While this represents a 10 percent decline from 2019, the consequences of such a mass travel event will likely be catastrophic. The pandemic saw its initial widespread transmission when five million people traveled out of the city of Wuhan in Hubei Province, where the first cases of COVID-19 were detected, to celebrate Chinese Lunar New Year with family. The virus quickly spread from China to the rest of the world.

Canada saw a significant spike in coronavirus infections and deaths two weeks after families across the country gathered to celebrate Thanksgiving on October 12. During the Spanish Flu pandemic in 1918, Thanksgiving in the US was followed by a devastating third wave that did not subside until the summer of 1919.

With all that is known about COVID-19—how it is spread, its lethality for the elderly and medically vulnerable—why are so many still traveling for the holiday?

There are complex and varying factors at work. Many students, for example, are returning home after the cancellation of in-person classes by universities, following the reckless reopening of campuses that has helped to propel the present outbreak.

Thanksgiving is a cultural tradition in the United States, the one time in the year when family members living in disparate parts of the country come together. As a result of the pandemic, tens of millions of people have not seen their parents, children, significant others or friends for months. They have gone through varying levels of lockdown and coronavirus restrictions while suffering through a period of unprecedented stress, turmoil and financial difficulty.

Many people have been led to believe that travel can be safe, or at least that the danger can be minimized. In the days preceding the holiday, demand for testing has surged. Millions hope that a negative test means that they can interact safely with their families over the holidays. Testing labs, however, starved of critical supplies, are reporting delays in delivering timely results.

While the ruling class and the media focus on the “personal responsibility” of those who travel, the fact is that the present spread of the virus is the direct product of the policy of “herd immunity” spearheaded by the Trump administration and backed by the entire ruling class.

Every day, workers are being forced to interact with their coworkers in factories and other workplaces in order to produce profits for the corporations. Falsely told that it is safe to return to school and work, many ask themselves: Could flying or driving to eat dinner with my family be any worse?

Then there is the immense confusion generated by the mainstream media, whose presentation, day after day, is that the pandemic is about to turn a corner for the better. The New York Times, the editorial voice of the Democratic Party, has been demanding that schools remain open and insists that they are safe even though more than one million children have contracted the disease. And it was the Times ’ columnist Thomas Friedman who vocalized the slogan of the ruling elite’s approach to the pandemic, that the “cure cannot be worse than the disease.”

Finally, there is the abysmal state of scientific education in America, the outcome of four decades of attacks on public education, which has resulted in a situation where significant sections of the population deny the existence of the virus, refuse to wear masks when in public and oppose the use of vaccines to protect the population from disease, ignorantly placing themselves and others at risk.

Trump’s repeated promotion of quack remedies, including the injection of bleach, while pressing for the rapid development and distribution of a vaccine during his administration for clearly political purposes, has sown great distrust among the population.

The systematic denigration of science is not limited to the Trump administration. In academia, the postmodernist rejection of rationality and the denial of objective truth prevails. At the same time, the churches, which play an outsize role in social and political life in the United States, peddle superstition and backwardness.

The collapse of the labor movement also plays a significant role in disorienting and polluting popular consciousness. In 2005, remarking on the bizarre spectacle surrounding the case of Terry Schiavo, a brain-dead woman who was removed from life support by her husband, WSWS Editorial Board Chairman David North noted the socioeconomic changes underlying the influence of backwardness and superstition among broader layers of the population:

The virtual disappearance of what had been the principal form of mass organization and popular resistance to corporate power radically changed the nature of the relationship between workers and the economic structure within which they live. Whereas in the past they confronted this structure, however inadequately, as a class, they now confront this structure as isolated individuals. They find themselves in a situation where they are compelled to confront problems not as part of a social collective, but by themselves.

This describes very well the situation tens of millions of people confront as the coronavirus pandemic rages. Workers and young people have been worn down by the daily onslaught of infection and death without any support. They have been left by the ruling class to confront the horror of the pandemic entirely by themselves. Nothing has been done to mobilize resources to stop the disease or to address its massive economic, social and psychological consequences.

The unions play no role in educating the working class about the dangers of the pandemic or the public health measures needed to contain the virus. Nor have they done anything to counter the anti-science sentiments that have been cultivated among a layer of backward workers. Instead, they have collaborated with the companies as their enforcers, keeping the factories, schools and other workplaces open without any restrictions, even as tens of thousands in the auto industry, hospitals, slaughterhouses and Amazon’s warehouses have fallen ill and many have died.

The disaster that is unfolding and is set to dramatically worsen in the next four weeks is the outcome of the fact that the needs of the masses are subordinated to the profit interests of the super-rich. While the billionaires rack up record profits and Wall Street soars to new heights, the working class is experiencing an economic crisis without precedent since the Great Depression. With the ending of the last vestiges of pandemic aid after Christmas and the lifting of moratoriums on evictions, millions face complete destitution. The promotion of cultural backwardness by the ruling class now intersects with a homicidal policy.

While the coronavirus pandemic is the immediate cause of the catastrophe that is enveloping the United States, its impact is bound up with the degraded social-economic and political conditions produced by American capitalism.

The pandemic is a historic event that has demonstrated that the persistence of capitalism stands in opposition not only to progress in a general sense, but to human life and the very survival of civilization. But how will this opposition be overcome? In the conclusion to his essay on the case of Terri Schiavo, David North called attention to the buildup of the forces that will vanquish capitalism:

The good news, as the saying goes, is that objective conditions themselves will lead, inexorably, to a revival of social struggles and a renewed differentiation of class forces. The persistence of reactionary ideologies is a barrier to the development of social struggles and increased class consciousness. But it is not an absolute barrier. In the final analysis, the objective contradictions of capitalist society will move masses of people into struggle and create the possibility for a renewal and quickening of genuine intellectual and social life.

But it is a superficial, naïve and self-defeating optimism that entrusts the ideological liberation of the masses from the grip of religious mysticism and backwardness to the spontaneous working out of objective forces. Now, as in every period of history, progress must be fought for.

This fight is not limited to practical efforts to organize workers, as important as these are. An essential component of efforts to organize workers politically as a class is the struggle to raise their intellectual and cultural level, to champion the cause of scientific thought against all forms of religious superstition and backwardness—that is, to champion a materialist Marxist understanding of not only the socioeconomic relations of society, but also the foundations and structure of human consciousness. As in the past, the socialist movement must recognize the vast scope of its theoretical and pedagogical responsibilities to the working class.

We can draw great encouragement from the fact that science is providing the socialist movement with a vast new array of intellectual weapons. It is ironic that the field of science at the very center of the Terri Schiavo controversy—neurobiology—is the scene today of the most spectacular theoretical breakthroughs. Astonishing advances are being made in the understanding of the physiology of the brain, the most complex of all material structures. And these, in turn, substantiate the materialist understanding of consciousness and cognition championed by Marxism. It is no wonder that the ruling elite should so fear the work of the finest scientists, whose discoveries in the field of neurobiology and related areas of research are systematically demolishing the last redoubts of religious mysticism.

The working class cannot advance without the aid of science. But science itself requires the advance of the working class. Today, the growth of political reaction in the United States places the scientific researcher under siege. But the isolated scientist cannot defend him- or herself any more successfully than the individual worker. In the final analysis, the progress of science as a whole, not to mention the physical safety of individual researchers, depends on the resurgence of a new revolutionary movement of the working class. In the most profound historical sense, the socialist movement unites under its banner both the pursuit of scientific truth in all its forms and the struggle for human equality.