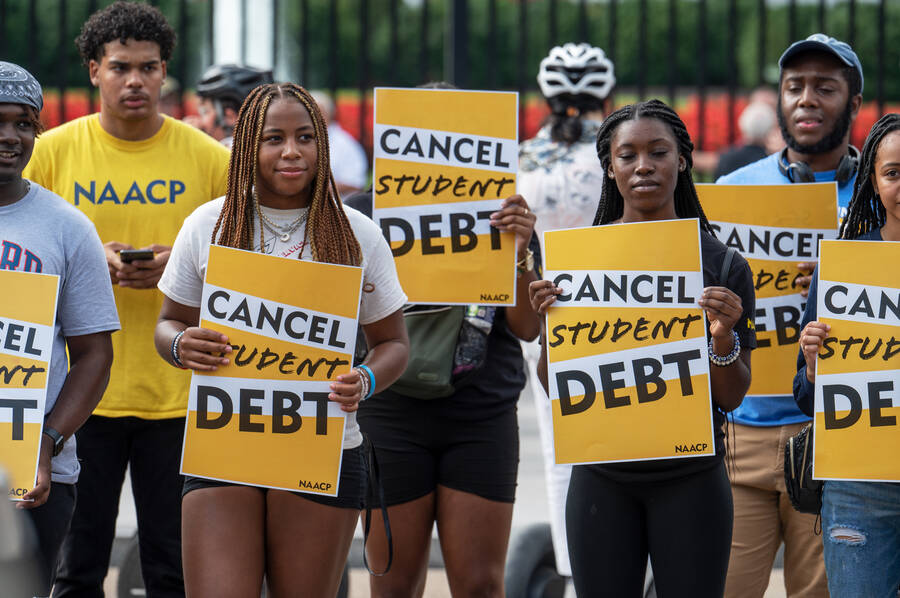 While Biden Has Taken Steps To Provide Student Debt Cancellation, Union Workers Are Excluded From A Key Relief Program.

While Workers At Anti-Labor Groups Like The Heritage Foundation Are Covered.

In 2007, the Bush-era Congress created the Public Service Loan Forgiveness (PSLF) program, also known as 20 USC 1087e (m)(1). The premise of the program was simple: student loan borrowers who made their payments would have any remaining educational debts forgiven after 10 years of public service.

Through PSLF, lawmakers and advocates intended to make public service a viable option for more borrowers, including graduates carrying large student loan balances. Unfortunately, this intention has not been realized for most borrowers or PSLF participants. Rife with exclusions and plagued by a history of poor communication and logistical failures, PSLF has historically approved very few borrowers for loan forgiveness even though many have applied.

While many workers have endured the shortcomings of PSLF, union workers — and the labor movement by proxy — have been particularly harmed. Why? Because the Department of Education (DOE) has long-held that employees who work for unions are excluded from PSLF.

Due to this distinction, the DOE sees 501(c)(3) organizations as performing PSLF-eligible “public service,” while it sees 501(c)(4) organizations as engaging in advocacy that might appeal to some viewpoints but not others. This rationale was not clearly communicated from the start of the program, however. After initially maintaining that 501(c)(4) nonprofit organizations were qualifying employers, in 2016, the DOE rescinded PSLF approval letters and excluded unions and other advocacy organizations like the ACLU from forgiveness. At the time, some union workers had already spent years believing that their service counted toward forgiveness. The ongoing impact on the labor movement is clear, and the choices are difficult.

Lucas, who did not want to share their full name out of fear of reprisal from their employer, says: “As a first-generation, working-class Latino attorney, I interned at unions throughout law school. When I applied for jobs, however, I only chose government work because I have debt and needed the PSLF program.”

“My first interview for a job post-law school was with a union, and I stopped including unions in my job search after finding out they aren’t eligible employers for PSLF,” another public interest lawyer who was not comfortable sharing their name says. “I treated the interview as a practice interview, as I knew I couldn’t take it if I got an offer.”

In many cases such as these, large student loan debts are the main factor in workers’ decision not to take a job with a union until debt is forgiven at other eligible employers.

“I am basically biding my time until I can be at a union,” says a current government policy worker with a six-figure debt load who requested anonymity to avoid retaliation. For workers who do choose to seek employment with unions despite the exclusion, the situation is also challenging.

“Union jobs not being eligible for PSLF has not stopped me from pursuing this line of work,” says a current union leader who did not feel comfortable sharing their name or that of their employer. “But it is definitely a huge burden and means that things like having kids and home ownership have to be deferred.”

Some union leaders have called for the expansion of PSLF. Becky Pringle, president of the National Education Association (NEA), said that, as a baseline, her union wants the Biden administration to extend the program to provide debt cancellation for members with 10 or more years of experience. “Our public service workers have held us together during the pandemic,” she told Politico. “Now it’s time for the federal government to keep its promise to them.”

The current configuration of the PSLF program forces aspiring labor leaders to choose between debt or labor advocacy, while shielding anti-union activists from the same difficult decision. To explore this distinction is to see its glaring flaws. Even ignoring the many studies showing that collective bargaining improves the compensation and work lives of both unionized and non-unionized workers, the idea that 501(c)(4) organizations engage in polarizing advocacy while 501(c)(3) organizations do not, and instead only serve a neutral public, crumbles when a light is shined on some labor-related 501(c)(3) nonprofits.

The anti-union National Right to Work Foundation and the Freedom Foundation are two of the most prominent examples of labor-related 501(c)(3) organizations whose workers are eligible for PSLF debt forgiveness. Other examples of such 501(c)(3) nonprofits that frequently involve themselves in labor battles include the Koch-backed Heritage Foundation, which has published articles like “The argument that most workers are better off without unions,” and the right-wing Federalist Society, which counts Mark Janus of the Supreme Court’s Janus v. AFSCME case as a senior fellow.

By excluding unions while including anti-union nonprofits, PSLF disadvantages the labor movement. As the White House takes steps to ease the burden on student borrowers through the recently-announced debt relief plan, President Biden can and must fix this unfair imbalance and reform PSLF to include union workers. Although Biden likely could not make this change through executive action, the DOE could do so through passing new regulations.

Although this approach risks Congress using the Congressional Review Act to overturn the newly issued regulations within 60 legislative days, such a move is unlikely to occur under a Democratic Congress and president. So time is of the essence to reform the program and help fortify the U.S. labor movement by extending PSLF to union workers.