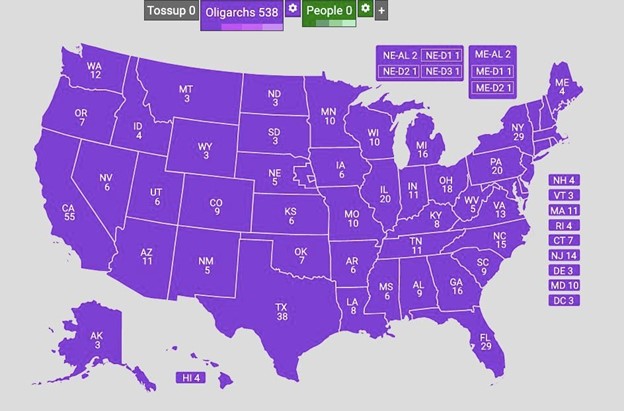 Why Democrats Don’t Win The Way They Should

The people prefer the initiatives which democratic party leadership claim to support.

But their interests are those of the oligarchy and not of the voters. Slim margins of legislative victory bring compromise and gridlock which the leadership don’t really oppose.

“What better way for corporate Dems to maintain the appearance of fighting for the people (while actually preserving the status quo) than for the GOP to hold more power? That way, Dem leaders can blame Republicans for gridlock, while keeping their donor class happy.” Peter Daou, former democratic strategist

Votes are still being counted in the midterm elections. It isn’t clear which party will control the House and the Senate with so many races still in contention. Democrats won a senate seat in Pennsylvania, while a Georgia race is so close that it will probably result in a runoff election which will determine control of the Senate.

But it is worth noting that issues connected with the democrats are very popular yet they do not result in the large gains one would expect to see. In every presidential election since 1992 the democratic candidate has received more votes than their republican opponent. Bill Clinton won two three-way races, but received the most votes. Al Gore and Hillary Clinton received more popular votes but lost in the electoral college. Regardless of these historical footnotes, the statement holds true. In presidential elections, which is when more people vote, democrats are the clear favorite.

Yet this preference does not show itself in the rest of the electoral process. There are states like Wisconsin, where democrats usually win in presidential elections, but also where republicans came close to holding a veto-proof majority in the legislature against the democratic governor. Regardless of what happens in presidential elections or gubernatorial races, the Pennsylvania legislature has a republican majority. In congress, democrats held razor-thin majorities in the House of Representatives and Senate, despite the fact that Joe Biden bested Donald Trump by more than 10 million votes in 2020.

It isn’t incompetence that keeps the democrats from fully realizing their political power. The terrible truth is that they prefer horse trading over the issues of importance to their donor class than they do meeting the needs of the people. Why does House Speaker Nancy Pelosi constantly speak of the need for a “strong republican party?” She needs a strong republican party, that is to say one which doesn’t resemble the January 6th rabble that frightened most of the nation. A more respectable and traditional republican party is one she can compromise with, and both sides of the aisle can represent the interests of the U.S. oligarchy while pretending otherwise.

Claims that every election is the most important in history, or a test of democracy, is a line meant for gullible rubes. They tell us so themselves. As president, Barack Obama presented republicans with a “grand bargain” of austerity so bad that Congressional Black Caucus member Emmanuel Cleaver referred to it as a “sugar coated satan sandwich.” As part of this plan Obama convened a National Commission on Fiscal Responsibility and Reform that was soon dubbed “the catfood commission.” Yet Obama hit the 2022 mid-term election campaign trail and condemned republicans for wanting to cut social security, which is exactly what he proposed doing ten years earlier.

Democrats raise millions of dollars for their presidential campaigns but come up empty in those state races which have a great impact on Americans’ lives. They don’t want to transform the country on behalf of the people. They are always on the side of their donor class and that is why the national leadership aren’t very concerned when republicans control state capitals. They will actually take a dive and then use their own corruption as a fundraising tool, pointing fingers at the republicans they have declared villains while secretly hoping they have to share power with them.

The inevitable result is senator Raphael Warnock of Georgia being in a close race with Herschel Walker, a former football player who mouths right wing, that is to say white wing, talking points on every issue. Warnock should have been further ahead but close races are guaranteed when there is no minimum wage increase while inflation runs rampant.

Of course inflation is high. Corporations gouge the public as much as they like because there is no major political party opposing them. Biden’s Inflation Reduction Act won’t reduce inflation by itself, but clever marketing is one of the tools used to keep the people fooled about how politics really work.

Why are margins so close in the House and the Senate when the people prefer what democrats claim to offer? The democrats are the ultimate cynics. They know what the people want and campaign accordingly, but once in office use the senate parliamentarian, arcane rules, or the bad cops among them to say that their hands are tied. The charade is a perfect crime.

Whatever the outcome of the races still to be decided, it is clear that the people must look to themselves and not at Joe Biden, Nancy Pelosi, or former president Obama, to guard their interests. They have different interests which are antithetical to those of the people. Electioneering fanfare cannot cover up this terrible but obvious truth.