Why Didn’t Carl David Goette-Luciak Say Something about the Torture He Witnessed?

Above and below Carl David Goette-Luciak at a road barricade in Nicaragua.

Note:  There has been a great deal of inaccurate and biased reporting about Nicaragua written in support of regime change and presenting a false narrative of what occurred in the Nicaraguan uprising. The article below is about a self-trained reporter, Carl David Goette-Luciak, who was the source of consistently biased reporting which had an agenda — provide support for the violent US-funded coup. He regularly wrote for The Guardian, an outlet that continues to be consistently biased in its coverage.

Journalist Max Blumenthal first exposed the false and biased reporting of Goette-Luciak on September 26 in How an American Anthropologist Tied to US Regime-Change Became the MSM’s Man in Nicaragua. Today, we published an article by a long-time Nicaragua resident, Why Didn’t Carl David Goette-Luciak Say Something About The Torture He Witnessed?  In another article, his close friend, Wyatt Reed, was interviewed and he described how Goette-Luciak was working with the opposition saying he was “closely aligned and working with groups that were very much against the Sandinistas.”

Earlier this year after trying to get a letter published in The Guardian people wrote an Open Letter to the Guardian about their poor reporting. The letter cited numerous instances of The Guardian failing to report the violence of the opposition and presenting an inaccurate narrative.  Carl David Goette-Luciak was specifically mentioned in the Open Letter which stated:

“The author of several articles, Carl David Goette-Luciak, openly associates with opposition figures. On July 5 he blamed the police for the terrible house fire in Managua three weeks earlier, relying largely on assertions from government opponents. Yet videos appearing to show police presence were actually taken on April 21, before barricades were erected to prevent police entering the area.”

After the Open Letter was published the Guardian published a short version of the letter followed by a series of letters opposing the Nicaraguan government.

Even when Goette-Luciak was deported The Guardian took a one-sided view of the situation never mentioning the biased nature of his reporting, his ties to the violent opposition and they used his deportation to again falsely report the alleged “state of repression” of the Ortega government. Goette-Luciak, from Blacksburg, Virginia (the bible belt of rural Virginia) was suspected by people as working for the CIA (which his family denies) because his reporting always supported the attempted violent coup.

Goette-Luciak was lucky he was deported and not prosecuted criminally in Nicaragua as he arguably aided and abetted torture and bloodshed by not reporting on the perpetrators. The article below focuses on his failure to report torture. 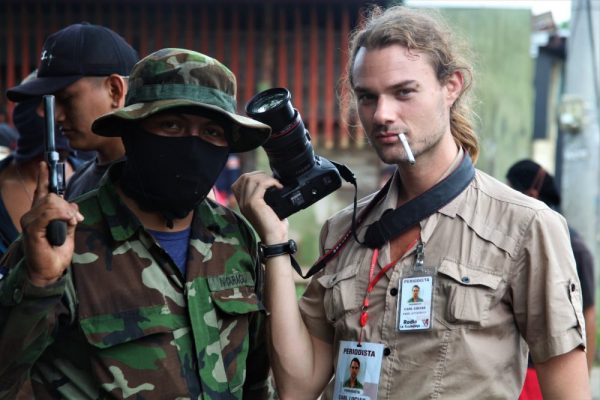 US citizen, Carl David Goette Luciak, was taken from his rented home in the Centro America neighborhood of Managua by Nicaraguan police midday October 1. He was driven directly to Managua airport where he was questioned. He then flew to El Salvador on Taca flight 397, and landed in Washington DC October 2. He had been expelled from the country.
Goette Luciak was a self-styled ‘reporter’, working for the Guardian and Washington Post, but he was never accredited as such by the Nicaraguan government, and he only held a tourist visa. For this reason alone he could have been deported from most countries, as for example happened to British journalist Elena Lappin in 2004 when she was expelled from the United States   .
But there was more to it than that. Photos Luciak had captured depicting armed opposition terrorists began to circulate on social media in early September. The most disconcerting fact, was that Goette-Luciak had actively tried to hide these images and never reported on them. Sandinistas have been  He originally came to Nicaragua in 2016 to live and work in the communities near the proposed interoceanic canal route to encourage opposition to it.
Exactly a month before the April 18 coup d’état he and Azucena Castillo , a well-known member of the opposition party MRS (Sandinista Renovation Movement), started a radio station, Radio Ciudadana. Castillo used to work at USAID-funded Radio Universidad also in Managua. Oddly, the new radio seems to do very little, and only has a few articles on its website. On Luciak’s Twitter account he lists himself as Director of Investigations for Radio Ciudadana yet on the webpage this section has no information.
Luciak has written a total of four articles since he began his career as a journalist in May, yet for The Guardian, The Washington Post and others, he quickly became their man on the ground in Nicaragua despite his open friendship and work with well-known opposition leaders. Photos of him with political leaders who openly call for the overthrow of a democratically elected president were posted on his Facebook Page.
The most disconcerting fact about Goette-Luciak is a video from June 30th during an opposition march in Managua called “March of the Flowers”.  Amazingly, I had already seen this video – the opposition has tortured over a hundred Sandinistas that we know of, and we are aware of this because they take videos and post them on Facebook. In this video the terrorists are walking along torturing an old man who they accused of being a Sandinista – they call Sandinistas toads and cockroaches; they mark their homes and tell people not to buy at their businesses. And they kidnap, torture and kill them. Luciak was right there as the torture was taking place and he shows up in the video at various points.
If Luciak is an objective journalist, why didn’t he write about this torture episode he witnessed up close and personal in one of his articles? Everything he wrote was rabidly anti-Sandinista. Why would the Guardian, the Washington Post, the BBC and NPR print his work?  There are many very knowledgeable journalists writing about Nicaragua but the mainstream media won’t print their work because they tell the truth – they don’t follow what has come to be the accepted narrative on Nicaragua in the “developed world”.
Max Blumenthal published a well cited article recently that revealed Goette-Luciak’s ties to the MRS (the opposition Sandinista Reform Movement).
Yesterday I read posts on Facebook from many Nicaraguan friends. The message I got from them was that with the video and photos they considered him to be supporting the coup. Non-Nicaraguans have never been allowed to be involved in Nicaraguan politics, much less in encouraging violence.  Five people wrote: Gringo Go Home!
Nan McCurdy is from Puebla, Mexico and with the United Methodist Missionary. She was a resident of Nicaragua from 1984 t0 2014.