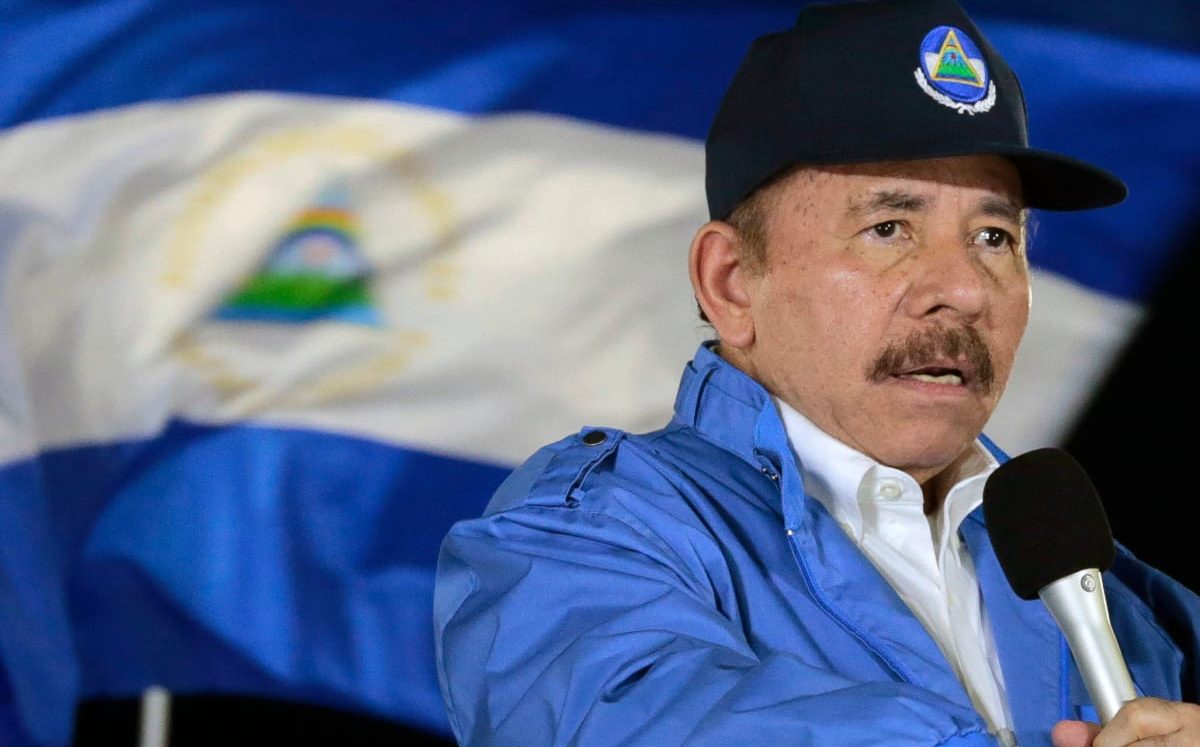 Why Do The Media Hate Daniel Ortega?

Is the U.S. meddling in the Nicaraguan election?

When Kamala Harris finally traveled to the U.S./Mexico border last week, she met several young women asylum seekers.  The vice president likely saw Hondurans, Salvadorans and Guatemalans who were fleeing from violence and extreme poverty.  But she probably did not see any Nicaraguan asylum seekers, who are few and far between.

Nicaragua and Honduras are considered the two poorest nations in Latin America.  Honduras is a corrupt, failed, violent country, whose government is backed by the U.S.  Nicaragua has free healthcare and education, and is considered the safest country in Central America.

Since Daniel Ortega and the Sandinista Front won the Nicaraguan election in 2006, they have made remarkable gains, dramatically reducing poverty and extreme poverty.  The Nicaraguan people have something that those escaping from Honduras, El Salvador and Guatemala do not have – hope for the future and peace in the present.

I first traveled to Nicaragua in the fall of 1983 with military veterans concerned that the U.S. was fomenting a Vietnam War in Central America. Four years after the Nicaraguan people rose up and sent the Somoza dictatorship packing, there was another war raging  – a war of terrorist violence against rural communities.  Nicaragua’s “Contras” were armed and trained by the CIA, and they later famously smuggled large amounts of cocaine into the United States.  As popular pressure moved the U.S. Congress to cut off funding for the Contras, Ronald Reagan, Elliott Abrams and Ollie North were implicated in the Iran-Contra scandal.  Drugs for money and weapons.  Fifty thousand Nicaraguans were killed.

The U.S./Contra War led to the 1990 electoral defeat for Sandinistas

By 1990, the U.S./Contra war and harsh economic sanctions had created a climate where Nicaraguans were effectively blackmailed into voting against the Sandinista government.  In Latin America, the Empire is not subtle.  The U.S. Ambassador held a press conference in Managua and told Nicaraguans how to vote. If they vote for the Sandinistas, he said, there will be more war and economic sanctions. The U.S. had selected the candidate, Violeta Chamorro, had pressured the opposition parties to unite behind her, and had funded much of her campaign. Violeta Chamorro won the election.

Even though the election had been rigged against them, Daniel Ortega and the Sandinista Front accepted their electoral defeat, and implemented the first peaceful transfer of power in Nicaraguan history. For seventeen years the Sandinistas remained in the opposition, while a series of corrupt neoliberal governments undid all their programs for the poor. Then in 2006, Daniel Ortega was elected president once more.

Since the Sandinistas regained power in 2007, Nicaragua has experienced remarkable progress. Free healthcare for all.  Schools and colleges built in rural areas.  Direct support to poor farmers. Dramatic reduction in poverty. Food sovereignty – they grow almost all the food that they eat.  Women’s equal participation in all aspects of government and the economy.  Really good highways connecting the entire country and its markets. It is now only a 6-hour drive from Managua to the Atlantic Coast of Nicaragua, with its Afro-Caribbean and Indigenous peoples, and unique autonomous regions.

Several recent polls show the Ortega government retaining widespread support and easily defeating even a united opposition ticket. They have nothing to fear at the ballot box.

But wait!  The U.S. media – and Human Rights Watch – are now screaming that President Ortega is arresting the opposition’s presidential candidates!  Can this be true? Actually, this is a very misleading accusation.  It is true that around 17 people have been arrested by Nicaraguan authorities. Several arrestees had political ambitions, but none had declared to run for president.  And none of the 14 parties registered for the November 7 election had chosen any of these people to be their candidates. These non-candidates were arrested for money-laundering, for failing to account for receipt of major foreign funding, for calling for economic sanctions against Nicaragua, and for collaborating with hostile foreign powers. We will see the evidence once they have their day in court.

There is a powerful backdrop to current events in Nicaragua.  In April to July 2018 there was an attempted coup in Nicaragua – widespread, coordinated violence, apparently taking the Ortega government by surprise.  Barricades blocked many roads, bringing commerce to a halt. A sophisticated social media campaign brought people into the streets with lies about the police killing students. Government buildings were torched.  Over 200 people died in street violence over several weeks. Half or more of the dead were Sandinistas, including 24 police. Videos were posted online of Sandinistas being tortured and even burned alive at the barricades. The U.S. media claimed that “nonviolent protester” were under attack by Nicaraguan police.

Daniel Ortega deflated the attempted coup by showing great restraint.  He pulled the police back to their barracks.  He kept the Army out of the fray.  He negotiated with opposition leaders. And he granted amnesty to those who had joined in these violent events. Ortega is now praised for having the wisdom not to overreact – not to cause further violence and chaos. Nonetheless, western media prefers to paint Ortega as an “authoritarian dictator” who violently represses dissent and jails his political adversaries.  That is the narrative we will hear over and over.

Much of the corporate media appears content to be propagandists for U.S. foreign policy.  At least they have become accustomed to that role.  Unfortunately, this is also true for elements within the human rights organizations.  Their accusations of human rights abuses too often coincide with the State Department regime change propaganda.

For well over a century, the United States has been invading Nicaragua, has occupied it with Marines, has supported the violent 40-year Somoza dictatorship, has organized a counter-revolutionary army, has funded opposition organizations and media, and has hyperactively intervened in the internal affairs of the Nicaraguan people.

Some historians say the potential for a Nicaraguan Canal, which would compete with the U.S.-controlled Panama Canal, has been major factor in the U.S. obsession with Nicaragua. What else would explain it?  Or does Nicaragua present the “threat of a good example.”

So yes, of course, the United States government is intervening in the Nicaraguan election. Their plan for doing so is detailed in a leaked USAID document. Contingencies include the sudden transfer or power under chaotic circumstances.

U.S. sanctions on Nicaragua will be intensified by the RENACER Act, which recently passed in the Senate Foreign Relations Committee.  It is difficult for Congressional representatives to vote against a sanctions bill when they are hearing the same horrible story from every media source. They need to be provided with accurate information and alternative perspectives.  So do all of us.  Even people who follow foreign affairs closely can be disoriented and confused by the barrage of disinformation coming from every direction.

Despite majority support for the Sandinista Front, there is intense polarization in Nicaragua. Most of the media is owned by the opposition and is virulently anti-Ortega. The attempted coup opened up old wounds, and was a heavy blow to the economy as well.

Demonize the Leader – Destroy the “Threat of a Good Example”

The oldest trick in the imperial regime change book is to “demonize” the leader of the government you wish to overthrow.  Like with Assad in Syria, for example.  Now we must believe that Daniel Ortega, whose government has improved the lives of tens of thousands of poor Nicaraguans, is a terrible villain who must somehow be removed.

We in the U.S. need become more media literate – more skeptical of Big Media. Why would we believe the Washington Post, the New York Times, CBS, CNN, or Fox News – the same media that told us there were “weapons of mass destruction” in Iraq?” The corporate media routinely justifies U.S. intervention and cheerleads for U.S. wars.

In July 2019 I traveled to Nicaragua with a delegation from Veterans For Peace. We visited with healthcare workers and with a women-run cooperative farm.  We heard emotional testimony from families of police who had been killed in the attempted coup of 2018 and from mayors whose towns had been under attack.  We met with veterans – the highly respected “historical combatants,” who ultimately took the lead in dismantling the barricades.

On July 19 – Nicaragua’s Independence Day – we joined 400,000 jubilant Nicaraguans who were rejoicing in the main square in Managua. They had traveled from all over Nicaragua to celebrate the 40th anniversary of the 1979 Sandinista victory over the U.S.-backed dictator Somoza. (Anybody see a pattern here?)

I love the heroic, handsome, poetic and fun-loving Nicaraguan people.  I am in awe of their unique and hopeful revolution. Casting a little light into the shadows of regime change propaganda is the least that I can do to show my appreciation.

Gerry Condon, former president of Veterans For Peace, has been visiting Nicaragua since 1983. For up-to-date news and views about Nicaragua, he recommends NicaNotes at www.afgj.org.