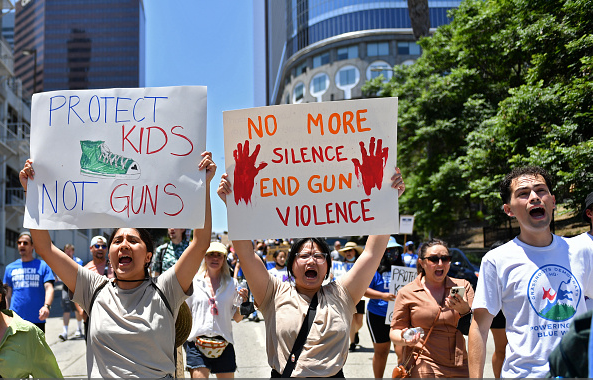 Why Escalation Is The Best Response In Moments Of Crises

Above Photo: Protesters participate in March For Our Lives II to protest against gun violence on June 11, 2022 in Los Angeles, California. Gun reform advocates in hundreds of communities across the U.S. took to the streets today in the wake of the shootings in Uvalde, Texas and Buffalo, New York. The March For Our Lives movement was spurred by the shooting at Marjory Stoneman Douglas High School in Parkland, Florida, in 2018. Sarah Morris / Getty Images.

To win on gun violence and abortion, activists must engage in actions of escalation that match the public’s distress.

Between the lack of action around police brutality, the threats to Roe v. Wade, increasing mass shootings, and the ever looming threat of climate catastrophe, desperation and despair have become the emotions of the day. Polling shows most Americans still care about these issues, but they’ve long lost faith in mainstream institutions and their capacity for change.

It can be difficult to know how to respond in moments of crisis like these. Besides panicking, one traditional approach is what is called the “ladder of engagement,” which relies on a series of actions that increase in intensity over time to win over supporters and apply pressure to people in power. This usually begins with gathering petition signatures and holding educational events while gradually building the support and capacity to move towards rallies and eventually, though rarely, more confrontational protests like occupations.

In moments like the one we are experiencing, the typical ladder may not only be too slow to be effective, the less urgent feeling of low impact actions may validate the fears of the large numbers of people who distrust the system and feel like change is impossible.

Some organizers did initially engage in confrontational actions, like protesting at a Supreme Court Justice’s house and the protest that drew hundreds on short notice to the NRA’s recent national convention. Most campaigns, however, have fallen back to tactics on the first rung of the ladder like petition gathering.

For our movements to succeed and grow, we must engage in actions of escalation that match the distress of the public and have the potential to seize victory in the midst of chaos. While I’ve spent most of my life as an organizer using ladders of engagement, one campaign from my past stands out as a shining example of what it looked like to ignore conventional wisdom and act with decisiveness in a way that was able to deliver success in days instead of years.

In June 2017, the New Jersey State Assembly unanimously passed a bill that would require all students to participate in a class that would teach them how to best interact with police and avoid being murdered by them — a rationale that its supporters did not hesitate to name. Given the recent acquittal of the police officer who murdered Philando Castile in Minneapolis, many other Black and brown organizers from across the state (myself included) were livid. New Jersey had taken little to no action on police brutality at that point, despite a number of protests and even being singled out in Michelle Alexander’s groundbreaking book “The New Jim Crow” as a consistent home of racist policing. So this first step seemed like an insult, not only to those murdered by police, but to the children who would be forced into a class that essentially blamed them for any harm that would come to them at the hands of law enforcement.

Despite some ties to the Black Lives Matter network, my primary organizing home was the New Jersey Student Union movement, which sought to democratize campuses and position students and workers over administrators. Unfortunately, most of our constituent organizations had fallen apart due to a series of internal conflicts. I drove to my old campus and met with some of the remnants of our former local student union to immediately build a power map, a sketch of who the people and organizations were that could decide whether or not this bill would pass, and what factors determined how those people and organizations would likely behave.

We discovered that the bill was being primarily pushed by Sheila Oliver — a Democratic legislator with ambitions to become the next lieutenant governor — and that it had received support from a number of unions and nonprofits that we were allied with, including the labor union that employed me at the time.

We determined that Oliver would be the target of our campaign. She was a key decision maker and had a lot to lose given the upcoming election. We immediately began making calls to allies, pushing my union to immediately drop their support and ask others to do the same. We also spoke to Black Lives Matter Paterson, the only chapter we had a relationship with at that point.

While many of our institutionalized allies were quickly on board, they pushed us towards creating petitions, setting up meetings with legislators, and holding call-in days to have the public call the offices of the Democrats powerful enough to kill the bill. We were tempted to follow along, but I’d recently gotten involved with Momentum — a social movement incubation organization — and had been introduced to the idea of trigger events.

Trigger events are events that cause polarization within society and force people to choose sides or become more committed to a pressing issue. They often just happen on their own, like the murder of Black people by the police. But they can also be created by organizers and activists — such as the occupation of the Sanford Police Station entrance in Florida by a group of young people, which sparked a movement around the death of Trayvon Martin. With that framework, we decided to take action and do something that our allies, opponents and Sheila Oliver would not see coming. We also wanted to do it in a way that would rely on the anger of our potential base.

There would be no petitions or call-in days from our end. Our plan was to — within days, not weeks — march on the statehouse and occupy its entrance. We wrote songs, created a campaign name, “GoodKidsBadCities” — a play on the title of a Kendrick Lamar album —  and designed the basics of the action. After determining a march route and an ideal day, one in which most legislators and some media would be present, we created a task list. There were only three core organizers working with the campaign, and we didn’t have time to build a new organization overnight — so we created a digital strategy to expand. We put our task list online and allowed anyone who attended the event (with some basic vetting) to sign up for a task. All of our tasks were taken on, and most of them were accomplished — from designing banners and flyers to scoping out the entrance of the statehouse and determining what it would take to chain ourselves to the doors. To this day, I have not met many of the people who helped ensure the action would happen.

On June 30, I arrived in Trenton by train and was met by a growing crowd of protesters and three separate police departments. We practiced our songs and chants while we waited for more people to arrive. Once we reached roughly 80 people, we began the march to the statehouse. We went back and forth between the streets and sidewalk as we physically negotiated with the police. We spoke with residents of the city as we passed, and some joined the march as we went along. Upon arriving at the statehouse, we were confronted by even more police, who told us that we would be arrested if we came anywhere close to it. After deliberating with a group of leaders who’d signed up to lead the march — most of whom I’d only met that day — we decided to proceed anyway, defying the expectations of the police. We held a rally near the entrance of the statehouse — students spoke, preachers spoke and organizers brought the crowd’s energy to a crescendo.

We noticed press and legislators peeking out from another entryway and decided to shift plans to see if we could maximize impact. We brought our protest into the statehouse and demanded to be let into the chambers as residents of the state of New Jersey. We pushed and shouted at the police as they pushed and shouted back. Legislators looked on in fear as they watched young Black, brown, and white people ready to storm in. We maintained our position until our leadership team determined that we weren’t in a place to risk the arrest of so many and that our confrontation with police was a successful enough escalation.

Within weeks, the bill had virtually disappeared. A bill that was passed unanimously and pushed by one of the most powerful Democrats in the state was crushed with a single action. Our allies pulling their support for the bill along with follow up calls to legislators from Black Lives Matter Paterson also played a role, but there is no way that such a victory could have happened so quickly without a more dramatic and disruptive intervention.

The slower path of escalation of course has merit. But there are moments in which confrontation must be prioritized — both to inspire people to actually show up in moments of despair and to ensure that terrible things will simply not happen. What we did of course wasn’t perfect. We didn’t set up enough infrastructure to absorb people into an organization; we didn’t even have an organization quite yet. We did later use the momentum to develop the Tubman Hampton Collective, whose aim was to create shared identity and strategy across New Jersey’s disparate left. But it lasted only a year, caught between follow up campaigns to GoodKidsBadCities and trying to design trainings and events with fairly new organizers who needed much of the support they were trying to provide for others.

We are in a moment that needs decisive and unpredictable action on the part of movement leaders. We need moments like Occupy Wall Street and the Florida occupation that planted the seeds for the Black Lives Matter movement. There is too much at stake for normal ladders of escalation, and in terms of issues like Roe and the climate crisis, the clock is ticking. We must prepare ourselves to translate the anger and frustration of the public into tangible action capable of shaking up the political order — and we must do so immediately.