Why Fiber Is Vastly Superior To Cable And 5G

By Bennett Cyphers and Ernesto Falcon, Eff.org
October 21, 2019
| Create!
Why Fiber Is Vastly Superior To Cable And 5G2019-10-212019-10-21https://popularresistance-uploads.s3.amazonaws.com/uploads/2017/12/popres-shorter.pngPopularResistance.Orghttps://popularresistance-uploads.s3.amazonaws.com/uploads/2019/10/fcc-forbearance_banner-f_0-1.jpg200px200px

Above Photo: From EFF.org

The United States, its states, and its local governments are in dire need of universal fiber plans. Major telecom carriers such as AT&T and Verizon have discontinued their fiber-to-the-home efforts, leaving most people facing expensive cable monopolies for the future. While much of the Internet infrastructure has already transitioned to fiber, a supermajority of households and businesses across the country still have slow and outdated connections. Transitioning the “last mile” into fiber will require a massive effort from industry and government—an effort the rest of the world has already started.

Unfortunately, arguments by the U.S. telecommunications industry that 5G or currently existing DOCSIS cable infrastructure are more than up to the task of substituting for fiber have confused lawmakers, reporters, and regulators into believing we do not have a problem. In response, EFF has recently completed extensive research into the currently existing options for last mile broadband and lays out what the objective technical facts demonstrate. By every measurement, fiber connections to homes and businesses are, by far, the superior choice for the 21st century. It is not even close.

The Speed Chasm Between Fiber and Other Options 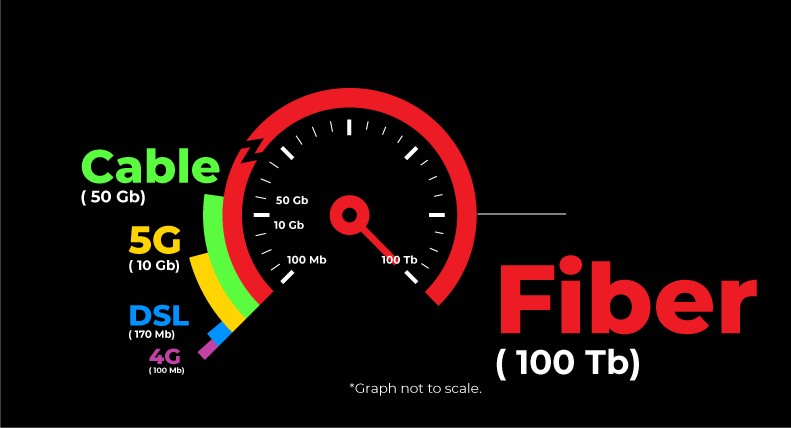 As a baseline, there is a divide between “wireline” internet (like cable and fiber) and “wireless” internet (like 5G). Cable systems can already deliver better service to most homes and businesses than 5G wireless deployments because the wireline service can carry signals farther with less interference than radio waves in the air.  We’ve written about the difference between wireless and wireline internet technologies in the past. While 5G is a major improvement over previous generations of wireless broadband, cable internet will remain the better option for the vast majority of households in terms of both reliability and raw speed.

Gigabit and faster wireless networks have to rely on high frequency spectrum in order to have sufficient bandwidth to deliver those speeds. But the faster the speed, and the higher the frequency,the more environmental factors such as the weather or physical obstructions interfere with the transmission. Gigabit 5G uses “millimeter wave” frequencies, which can’t travel through doors or walls. In essence, the real world environment adds so much friction to wireless transmissions at high-speeds that any contention that it can replace wireline internet fiber or cable—which contend with few of those barriers due to insulated wires— is suspect.

Meanwhile, fiber systems have at least a 10,000 (yes ten…thousand) fold advantage over cable systems in terms of raw bandwidth. This translates into a massive advantage for data capacity, and it’s why scientists have been able to squeeze more than 100 terabits per second (100,000 Gb/s) down a single fiber. The most advanced cable technology has achieved max speeds of around 10 Gb/s in a lab. Cable has not, and will not, come close to fiber. As we explain in our whitepaper, fiber also has significantly less latency, fewer problems with dropped packets, and will be easier to upgrade in the future.

The American story of broadband deployment is a tragic one where your income level determines  whether you have competition and affordable access. In the absence of national coverage policies, low-income Americans and rural Americans have been left behind. This stands to get worse absent a fundamental commitment to fiber for everyone. Our current situation and outlook for the future like did not happen in a vacuum—policy decisions made more than a decade ago, at the advent of fiber deployment in the United States, have proven to be complete failures when it comes to universal access. EFF’s review of the history of those decisions in the early 2000s has shown that none of the rationales have been justified by what followed.

But it doesn’t have to be like this. There is absolutely no good reason we have to accept the current situation as the future. A fundamental refocus on competition, universality, and affordability by local, state, and the federal government is essential to get our house back in order. Policymakers doing anything short of that are effectively concluding that having slower, more expensive cable as your only choice for the gigabit future is an acceptable outcome.