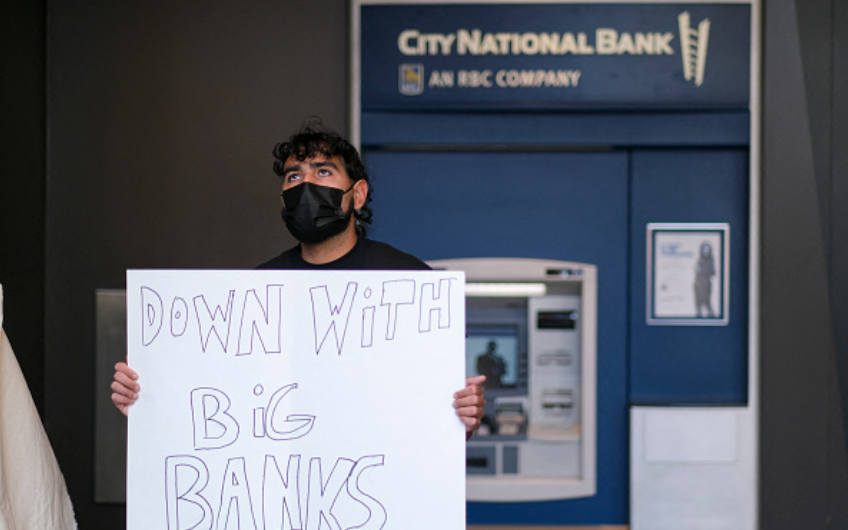 Above Photo: A man standing in front of a ATM machine holds a sign reading “Down With Big Banks” during a rally to protest City National Bank and Royal Bank of Canada’s financing of climate crises and disregard for the rights of indigenous peoples, in Los Angeles, California, March 18, 2022. Ringo Chiu / AFP.

Determined to challenge the all-encompassing threat of private banks, a small group in Ohio is leading a campaign to put monetary reform on the national agenda.

Ohio – How many people would like to cut the cost of local mass transit improvements in half, divert local tax dollars from big bank use to supporting low-income housing at home, see one-time federal relief packages for struggling families continue? All that and much more becomes possible without costing taxpayers a dime, if we choose a more efficient and democratic system for handling money than our current one, which systematically benefits the rich at the expense of the poor.

To learn how, we’ll need to explore a different “plumbing system” for handling our money supply. In a groundbreaking move in this direction, a League of Women Voters group has been doing exactly that, calling us to consider how something we take for granted — the money supply — can be reinvented in a way that promotes democracy, justice and the planet. In the process, these women learned it’s not as wonky as they may have feared.

Many of the issues that bring us out into the streets have to do with economic injustice, and many campaigns around meeting basic needs of people or planet flounder on the seeming reality that there’s just not enough money in the system to responsibly fund them. We fight on against this status quo of scarcity and have some victories at times. But our attention tends to stay on these pressing unmet needs, while the larger story of the dynamics of scarcity goes unchallenged.

Even as Occupy Wall Street helped open our eyes to the dramatic inequities in wealth distribution — and campaigns to tax the rich are beginning to gain some traction — we haven’t yet found a way of engaging with the foundational issue of our money system’s role in creating wealth and inequality.

One welcome sign of change, hidden from the eyes of all who weren’t there, happened this summer in Denver at a plenary session of the national convention of the venerable League of Women Voters, or LWV. They spent much of their time responding to shocking challenges to voting rights and democracy in our country, which have been the central focus of the LWV since its founding. Yet 187 delegates also voted to turn their attention to a perhaps even graver threat to democracy — the control that private banks wield over our money system.

For decades, conversation on this issue has been limited to a small circle of monetary reform enthusiasts, arguing passionately — mostly among themselves — for sweeping federal reform.The way out of that echo chamber and into the hearts and minds of grassroots activists has proved elusive.

Enter a hardy band of intrepid pioneers from southeastern Ohio, wielding the LWV’s stated vision, not only of engaged democracy, but of governmental support for addressing economic needs. The vexing question of how to break out of that small circle of monetary reform enthusiasts and get a foothold in popular discourse — and movement strategy — may be getting the beginnings of an answer.

The motion at the LWV convention in Denver didn’t carry. With 900 people present, it could be said that it went down in flames. The folks who brought it, however, weren’t surprised. The competition was stiff, with Washington D.C. statehood, ranked-choice voting and finally ratifying the Equal Rights Amendment all on the table. Instead, they were heartened by 187 votes of additional support and new interest, and they went home determined to continue building their base.

Debbie Schmeiding, a long-term member of that chapter of the LWV in southeastern Ohio wasn’t always so focused on the threat of private banks. She knew about wealth inequality, cheered the Occupy movement from the sidelines, and saw “how many times league initiatives and goals have been turned aside because the nation ‘can’t afford it.’” But she’s also the first to admit that the monetary system had been a closed book to her. “I came with a semi-alert awareness that something wasn’t working well.”Then she invited fellow chapter board member John Howell to talk at a local LWV house party, and everything began to change. “I knew he was interested in money. I thought it was about Citizens United.” But John instead offered an introduction to the money system, and in the nine-month study project that followed, she recalls a series of moments when her surprise verged on disbelief: “Wait, what?!”

The bills and coins that the Treasury issues — what we would identify, if pressed, as our nation’s money supply — make up just 5 percent of the money in circulation. The remaining 95 percent of our money is created with a computer key stroke when private banks issue loans: a debt in that individual’s account and a receivable in the bank’s. The debtor now has new money available that is owed back to the bank — plus interest.

These banks are not loaning resources they already have. They are creating new money. And if you don’t believe it, just ask the venerable Bank of England, which will assure you that this is true. “Wait, what?!”

The true limiting factor in any productive endeavor is not, as we’ve all been taught, a lack of financial resources. If labor and physical resources are available, money can always be issued into the economy through the government. Just think of how our country got out of the Depression and financed World War II. “Wait, what?!”

The real problem with our government debt is not the total number that sits on the books. It’s the ever-growing interest on that ever-mounting debt that goes out every year from our public taxes to the holders of Treasury bonds — largely big players in the private financial industry. With wealth steadily flowing upwards through interest payments, the amount of wealth concentrated at the top of our economic pyramid is roughly equivalent to all the debt that people struggle with below. “Wait, what?!”

Occupy gave us the language of the 99 percent, which has been a gift to activists on any issue that has any relationship to the economy. That narrative is now embedded in the popular consciousness, and people can be called out into the street for demonstrations, whether it’s to support a right to a living wage or to call for taxing the ultra-rich to pay for it. Nevertheless, popular enthusiasm for changing the rules — the very goals — of the whole game will require more people to engage with this series of “Wait-what?!” questions.

By the end of the nine-month study process, Debbie and her little group in southeastern Ohio were convinced. “How did a money policy nerd ever capture the attention of people like us?” she said. “It was knowing that things are going badly in our country and the world, and money is at the heart of it.” To make decisive movement forward on many of the issues LWV cared most deeply about, the rules of the money system would have to be addressed head-on.

They were ready to go to the national LWV convention, but with what? They deliberated about a framework that would maximize interest and engagement, and came up with a list of 10 features of a money system that would support the group’s values and positions on issues. These could be criteria against which to measure any piece of proposed legislation.

Their position statement opens with clear reference to longstanding LWV values: “The League of Women Voters shall advocate for change in the monetary system in service to its commitment to government policies supporting democracy, the meeting of human needs and promoting environmental protection.”

The list starts with the overall need for a money system that will provide a convenient medium of exchange with ease of use for all. It envisions a money system that: keeps the economy stable while privileging no group; is for public good rather than private profit making; is unlinked to increased debt and independent of economic growth; connects globally in ways that privilege no nation; and supports a sustainable future for all.

This is still heady stuff. But there is a gleam in Debbie’s eye when she reflects on all the LWV proposals that have foundered in the past, never getting off first base because of a lack of adequate public resources. She knows we have to get smarter about going for the root.

There are 70,000 active and passionate LWV members in all 50 states, across more than 700 state and local chapters. They’re smart, and they will resonate with a proposal about doing things differently. And they are just the beginning.

The potential is enormous. If profit-seeking interest were removed from the equation of money creation, more resources could circulate in the real economy, which has been increasingly starved of resources since the banks were deregulated in the early 1980s. Interest, which steadily flows up to those who have more, can easily double the cost of a long-term community-serving project.

There are alternatives. Government can spend directly into the economy, as was done with COVID supports. We have models in the Reconstruction Finance Corporation that got our country out of the Depression and World War II, and in the proposed National Infrastructure Bank. Public banks, like the 100-year-old State Bank of North Dakota, can divert the tax dollars that now flow to global profit-maximizing banks, keeping these dollars home to serve the community. The potential of emerging green banks can be enhanced to move them beyond revolving loan funds to money creation in the service of sustainability.

What all these models have in common is the removal of profit-seeking interest from the process of money creation, turning it from a commodity into a public utility. Imagining such a fundamental change in our very system of money creation is the first step to building support for such efforts. The LWV is now in motion in that direction.

“I have a vision of a national people’s conversation, where people like me get a chance to sit for an evening and hear the details succinctly and intelligently,” Debbie said. “I have a lot of faith in league members to be thoughtful about issues. It would be a contradiction to the idea that we, as an electorate, have given over our intelligent authority and ownership of monetary terminology.”

The highest LWV goal is formal adoption of a policy. Then, if anybody brings up legislation, at any level of government, that official policy can be brought into the conversation. But Debbie sees a more dynamic and interesting outcome: “We have thousands and thousands of people like me being alert and aware of what’s going on and what the possibilities are.” With access to such a large pool of people who pay attention to public policy, she sees the potential of this perspective powerfully informing their conversations with candidates and public officials. “This is not necessarily an easy sell, but we’re farther along than some.”

Looking ahead, Debbie recognizes the challenges. Among her Ohio state board and staff, she says, “Voting access and rights that feel more in your face are taking up all the oxygen.” People feel as though they “can’t do another thing.” But as Debbie sees it, “We just have to convince people that money is at the base of all those other things that make us crazy.”