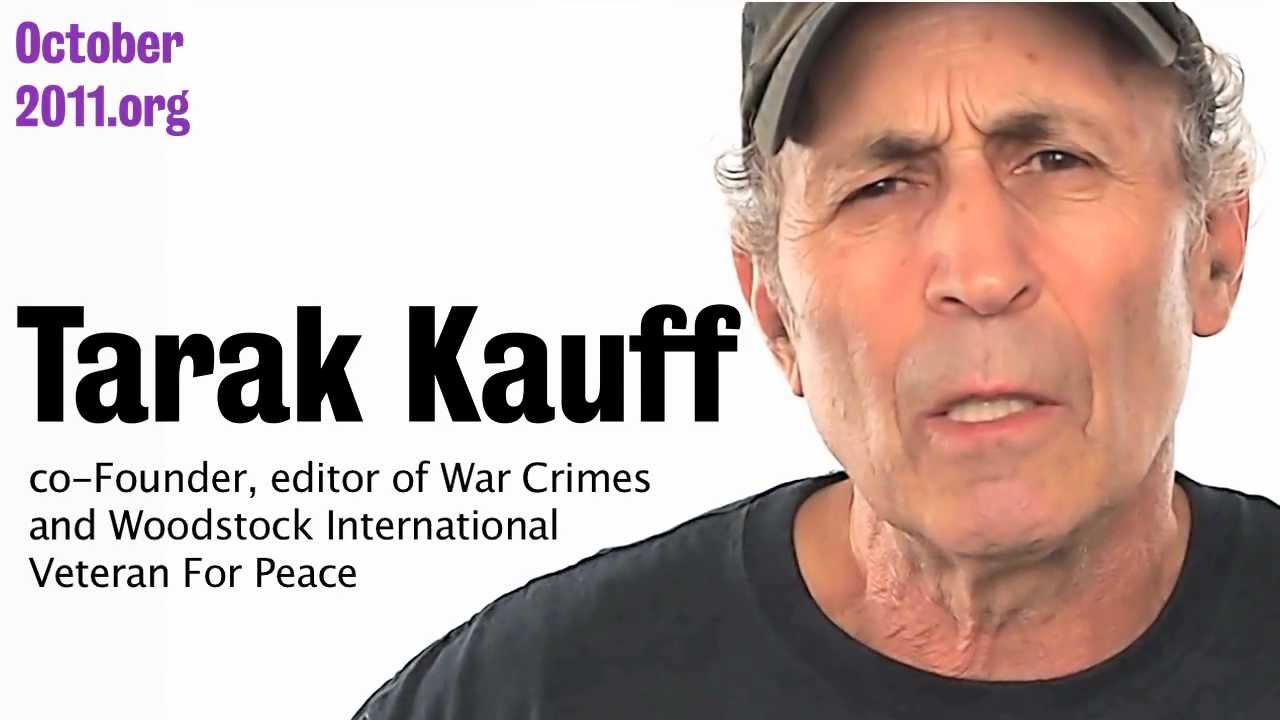 Tarak Kauff: Why I am on Hunger Strike in Solidarity with Guantanamo Prisoners

The resolute determination of more than 100 hunger strikers at the prison in Guantánamo Bay has inspired a movement. In solidarity with their struggle for freedom, on the evening of June 7, I began a 300 calorie-per-day, liquid only, indefinite (open-ended) hunger strike.

To keep things in perspective, my own hunger strike is a small sacrifice compared to what the prisoners are going through. I am not kept in solitary confinement; I do not have burly U.S. military guards bursting into my cell, slamming my face against the floor, breaking my nose, my teeth and bones. I do not have my head shoved into a toilet bowl as I am told to drink. I am not strapped down for two hours while a tube is painfully pushed through my nasal passage so I can be force fed. I am not deprived of seeing my loved ones, my children. I am not treated as a sub-human object to be brutalized and shown no human kindness. 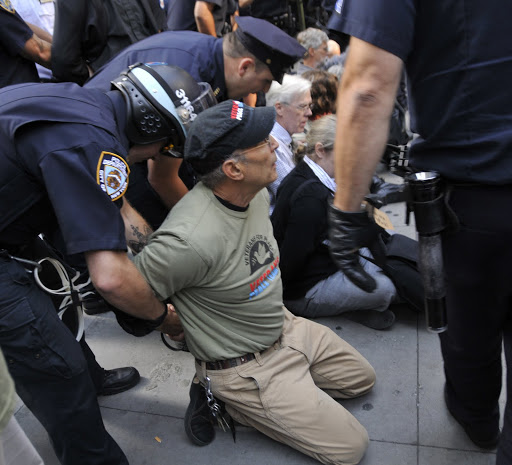 I never trusted Obama, but when, on his second day in office he proclaimed that he would close the prison at Guantánamo Bay within a year, I thought, well, maybe there is some hope. That hope has been violated by hypocritical excuses and outright lies as year after year goes by and inhumane conditions and torture persist at Guantánamo Bay in direct violation of the Geneva Convention, international law, the U.S. Constitution and all norms of human decency.

The Guantánamo Bay prison is a blight on America’s soul. Having lived in the United States for all of my 71 years — am I not part of that soul? Are not the torture and hellish conditions perpetrated at Guantanamo Bay prison an abomination, a black mark on every U.S. American’s soul? I ask this question of myself and all of us.

Eighty-six of the prisoners have been cleared for release, it having been determined that they were never in the first place, are not now, and most likely never will be a threat to the United States. But they are not being released and are held under such desperate conditions, with no end in sight, innocent of any crime except being in the wrong place at the wrong time, that more than 100 prisoners are now on hunger strike. Over 80 of them now weigh less than 100 pounds. The prisoners must feel it would be better to be dead than to never again see their loved ones, children, their families, to undergo a hellish imprisonment that has no foreseeable end — feeling at least when their bodies die their souls will be free.

Forty-one of the hunger strikers are being regularly strapped down, head, arms and legs tightly restrained to undergo force-feeding, which is exruciating and dangerous, and the military has just sent 125 more troops to Guantánamo to assist in this additional torture and to put down the nonviolent hunger strike revolt. The U,N, Human Rights Office has condemned force-feeding as a form of torture, a clear breech of international law. Of course that is nothing new; our government, including the present administration, has been violating international law and our own Constitution with impunity for a long time.

We have all become, by proxy and by inaction, a nation of criminals.

Adnan Latif, a 37-year-old man from Yemen, was cleared for release under both the Bush and Obama administrations and by a U.S. court but then his writ of habeas corpus was overturned by the DC Circuit Court, a ruling the Supreme Court, the same court that said corporations are people, let stand. He died on September 12, 2012, after more than 10 years at Guantánamo. Before his death he wrote,

Jumah al Dossari, a 33-year-old Bahraini who was finally released after five years of unjust imprisonment and torture at Guantánamo Bay, wrote the following:

Take my blood.
Take my death shroud and
The remnants of my body.
Take photographs of my corpse at the grave, lonely.

Long time activist and writer, Brian Willson, a man of deep empathy, a Viet Nam veteran, although not in good health at the time, determined to preserve his humanity by undertaking a hunger strike in solidarity with those prisoners at Guantánamo and to help publicize their plight. He fasted for 28 days, losing 24 pounds before abandoning the hunger strike due to serious medical conditions. In his statement, he said:”The continuing captivity and maltreatment of these prisoners is medieval, barbaric, sadistic,and grotesquely illegal according to both U.S. and international law. It dehumanizes all of us.”

“Late at night I can hear their desperation and their pain, it is not a sound, it vibrates though my body. At some point each one of us have to ask ourselves how long we will look the other way, turning away from what is being done in our name and being paid for by us. I can no longer listen to their cries. I have to do something just to preserve my own integrity. If I do nothing, what kind of a person would I be? So I fast.”

Diane Wilson, on hunger strike for over 40 days said,

“… where am I? Well, I know where this one American fisherwoman is. I stand in solidarity with the Guantánamo prisoners on their hunger strike and I will fast indefinitely until justice comes. Shut down Guantánamo!”

Brian, Elliott and Diane are among my dearest friends. I decided that I wanted to be no less human, no less willing to hunger for justice than their examples of courage and commitment. So I join them, as others are and will join and our cry for justice will be amplified.

If our hunger strike here can bring attention to the plight of those in Guantánamo and to what Brian calls “a long tradition and pattern of domestic cruelty to its own prisoners” in the United States, if these actions somehow contribute to raising awareness and ending the Guantánamo prisoners’ time in hell, if that happens, then this small sacrifice will have been well worth it. Currently thousands of human beings, no different from you or me, are imprisoned in the United States and are being held in long-term solitary confinement. Solitary confinement for any extended period of time amounts to torture. It also has got to end.

It is worth mentioning that we all owe a debt of gratitude to heroic whistle-blowers like Bradley Manning, who, at great personal sacrifice, made much of what we know today of the abuses at Guantánamo available for public scrutiny. Guantánamo; the government’s imprisonment, torture (11 months solitary confinement) and prosecution of Bradley Manning; the ongoing U.S. global war of empire and terror; the racism; the targeting and mass domestic imprisonment of people of color; the horrific conditions in our domestic prison system; the poverty — it’s all connected.

It is up to human beings of conscience to take the risks, step out of our comfort zones and do our utmost to end this disastrous reign of U.S.military and corporate-controlled government. We are indeed our brother’s keeper. The U.S. corporate/military/industrial monstrosity, its policy of unending war is not only torturing prisoners at home and abroad but devastating the natural earth we all depend upon for survival.

If we do not act with determination and courage now, we can be assured that we, our children and their children will reap the results of our inaction. Is that what we want?

Rise up America! Shut down Guantánamo!

Tarak Kauff has been active in anti-war, peace and justice activities since being discharged from the U.S. Army paratroopers in 1962 after 3 and 1/2 years of stateside duty. He organizes with the Veterans For Peace Direct Action Group and  started the Veterans Peace Team. He was one of the founders, along with Kim Carlyle of  War Crimes Times, the hard copy and online Veterans For Peace newspaper. A member of the Veterans For Peace Board of Directors, he is also one of the original members of Middle East Crisis Response. He lives in Woodstock, NY.