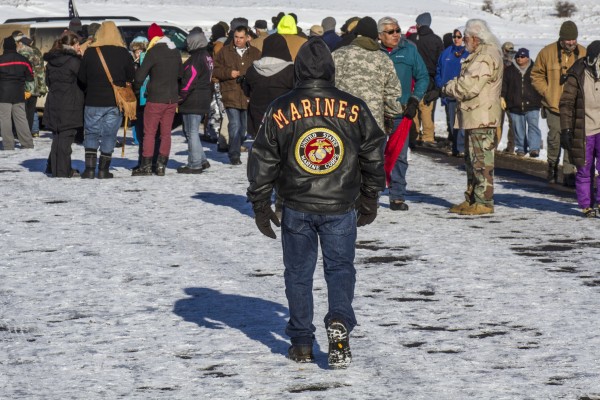 Above Photo: From otherwords.org

At Standing Rock, for the first time, I felt like I was finally serving the people.

I lay among friends, huddled and cold in our sleeping bags. We listened to the lashing wind and the drums and prayer chants coming from the sacred fire, and we reflected on why we, four Iraq War veterans, were here.

Police floodlights shone from the drill site of the Dakota Access Pipeline, scheduled to cross under the Missouri River, the water source for millions of people.

Members of the Standing Rock Sioux, concerned not only about polluted water but also the desecration of sacred sites, began resisting the pipeline in 2014. In mid-2016, finally, these water protectors gained major support.

Over 200 tribal nations pledged solidarity. Thousands of non-natives traveled to North Dakota to stand on the front lines. Then, as images of police violence against protectors got increasingly disturbing, some 4,000 veterans — including me — joined the resistance in early December.

Why had so many veterans taken up the cause of the Native Americans and environmentalists at Standing Rock?

My own reasons are rooted in western Pennsylvania’s coal country, where I grew up. There, I rode my bicycle on trails crossing abandoned strip mines. Bulldozers had left precarious shale formations and streams ran orange with iron runoff.

When a sanitation corporation threatened to open a landfill at a reclaimed mine near homes in our community, residents finally resisted. At age 15, I joined the fight to stop the dump, gaining a deeper appreciation for the wildlife — and water — of my region.

Good jobs are scarce in my hometown, so military service is something nearly every boy — and now girl — considers. My grandfathers both served, along with several uncles.

Back home, the military is sacrosanct. But I wasn’t especially proud of my five years in the Army, two of which were spent in Iraq.

My job as a radar operator, like so many military specializations, got privatized, so I found myself tasked out for other duties. I guarded poor Iraqis while they filled thousands of sandbags for the contractor Kellogg, Brown, and Root, only to see those sandbags rot in the sun as they sat unused.

I also loaded caskets onto cargo planes — an image often hidden from the American public. And I escorted high-ranking officers on unnecessary trouble-provoking missions (how else could one earn the Combat Infantry Badge?).

Like many post-9/11 veterans, I left the military seeking redemption. Perhaps that’s why, after I saw those images of police violence against water protectors, I went to Standing Rock.

There, instead of helping military contractors make money, I felt like I was finally serving the people.

While we were there, on December 4, the Army Corps of Engineers finally denied the pipeline company its permit to drill under the river. Police pulled back, and the water protectors celebrated.

The indigenous community had worked months for this ruling. They sacrificed the most. But I like to think the result was also influenced by the prospect of police tear-gassing and firing rubber bullets at unarmed veterans.

A ceremony followed where Wesley Clark Jr., key organizer of the Veterans Stand for Standing Rock campaign, offered an apology to Native Americans on behalf of the military, citing decades of broken treaties and violence. Five hundred of us went to our knees.

I hope to participate in a forgiveness ceremony one day in Iraq, in the spirit of Standing Rock.