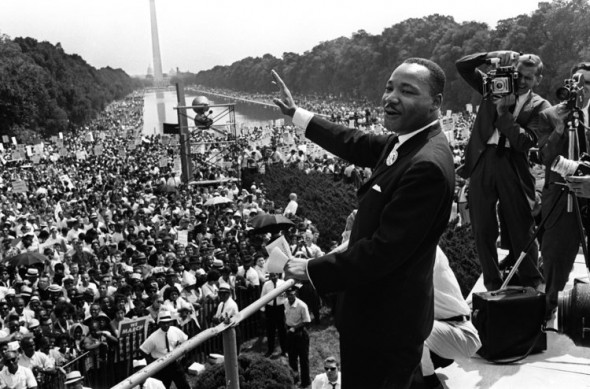 Why I Do Not Support The Women’s March On Washington

My name is Brittany Oliver and I’m a women’s rights activist in Baltimore, MD.

As a Black woman, I am once again let down by people who call themselves feminists. I have been marginalized by the movement and now, my guard is up.

Despite my posts being deleted from the national Facebook event page, I’ve continued to be very vocal in my disappointment in the political co-optation of the “One Million Women,” now known as the “March on Washington” which is scheduled for January 21, 2017 at Lincoln Memorial in Washington D.C. 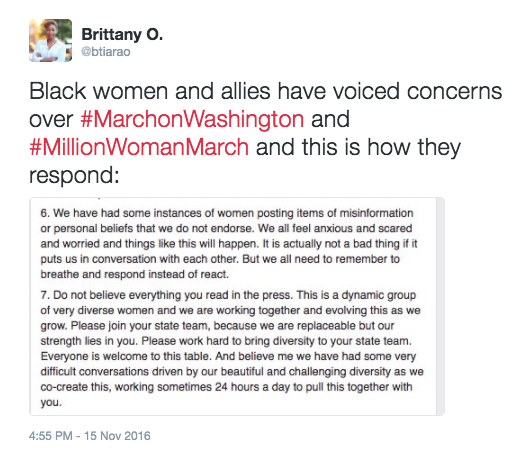 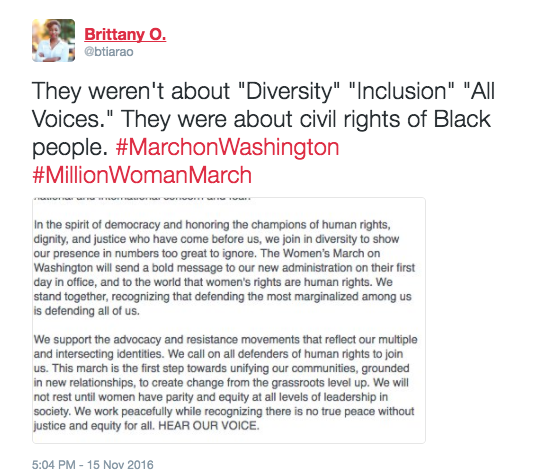 In the beginning, you called your effort “One Million Woman,” and soon after being made aware you were co-opting a march led by Black women in 1997, then you decided to change the name to “March on Washington.” Well, little did you know, the “March on Washington” was yet another Black-led march that advocated for civil rights and culminated Dr. Martin Luther King Jr.’s “I Have a Dream” speech in 1963.

Overall, you all have co-opted the messaging of these two very important historical moments in Black history and it is unacceptable. Politically co-opting our efforts with “ALL WOMEN” and “ALL VOICES” is merely an attempt to erase the specific needs of Black people.

You changed the messaging from #BlackLivesMatter to #AllLivesMatter. Why?

Since you’ve been made aware, I have yet to see paid homage to the work of our leaders and ancestors. Furthermore, this march still does not have an anti-racist, anti-white supremacist agenda, which I’m sure you all know is an issue given the November 8 election results: 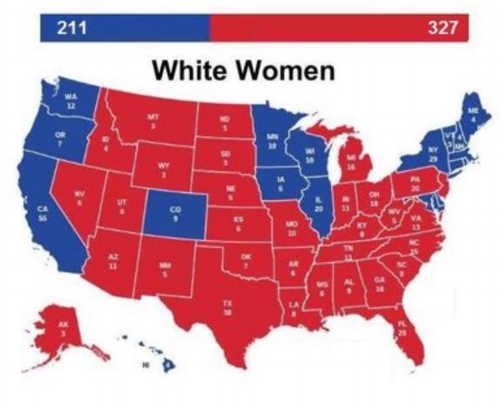 While I know you must be extremely proud of all the recent news coverage you’ve received, don’t forget to check out Fusion’s piece of your protest appropriation.

During the suffrage movement from 1848-1923, Black women were not even seen as human. White women who led equality campaigns in Washington, D.C. requested that black suffragists walk at the back of their parades. As a result, black women chose not to march at all and refused to participate. Isn’t it funny how history repeats itself?

This is why so many Black women and Black people of various identities struggle with connecting to mainstream feminism. It has so often failed to give us a platform to discuss how racial inequality relates to gender inequality. This doesn’t mean that we don’t care about equal rights across the board; it just means we can’t ignore the racism within the movement.

Sexism is NOT my only struggle. You don’t get to silence me or other Black women to dodge accountability of unpacking your racism.

Regardless of your intentions, white feminists should not be speaking for Black women or women of color unless asked to do so because that is what allyship looks like. Begging me to keep quiet because it makes you feel uncomfortable is not my problem.

The controversy you’ve created even caused your lead organizer in Maryland to step down: 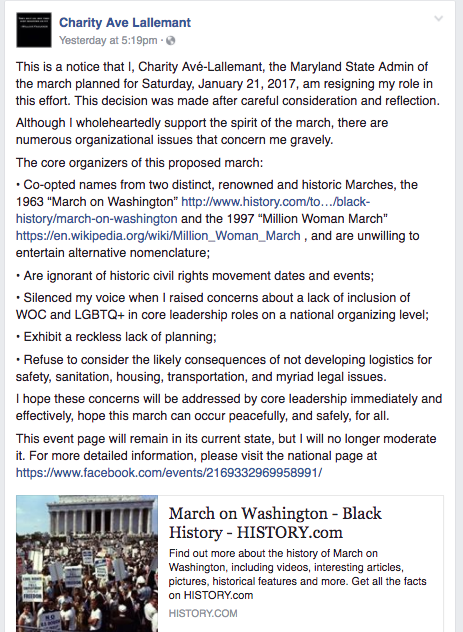 In case you needed a reminder, this is what the March on Washington looked like in 1963:

And this is what the Million Woman March looked like in 1997:

This is the perfect example of how white supremacy disguised as white feminism can be incredibly damaging to Black bodies, Black culture and Black herstory.

If you haven’t already, I suggest reaching out to the original organizers of the Million Woman March because you owe them an apology:

My message is loud and clear: Black people already did this.

To sweep the hard work of the black struggle under the rug is a prime example of what NOT to do and yet here we are again.

I will not be attendance because it’s not worthy of my presence. From here on out, any march that do not support building social, political and economic power for Black women and their communities will not get my support. Why?

Because the white pantsuit you wore on Election Day was made possible by white women suffragists who stepped on the backs of my ancestors.

Never forget, it was Susan B. Anthony, who stated, “I will cut off this right arm of mine before I will ever work or demand the ballot for the Negro and not the woman.”

Lastly, your information packet says “These women recognized the need to be inclusive” and that’s not true. What actually happened is that you got called out for protest appropriation. It’s very important to be transparent about the intellectual and emotional labor it took to make you aware of your mistakes:

For everyone else reading this, I urge you to find a way to support local Black-led grassroots organizations in your communities. Donate, volunteer, spread the word, anything.

For reasons like this is exactly why they need you now more than ever.

A HUGE thanks to all those who have supported me in speaking out and taking a stand.