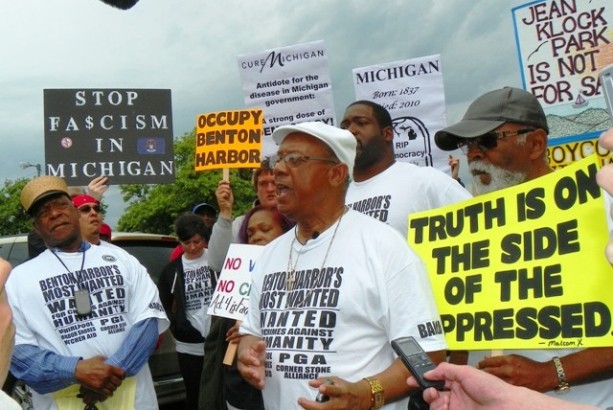 Why Is Rev. Edward Pinkney In Prison?

Another Case of Political Persecution

Benton Harbor, MI – One answer comes to mind from my very first meeting with Pinkney in 2003. I drove from Lansing to Benton Harbor in southwest Michigan to witness a Berrien County Commissioners meeting soon after the Benton Harbor uprising. At that eye-opening introduction, white commissioners literally laughed at Black community members’ desperate appeals for justice for their young Black men, incarcerated or killed with impunity at a sickening rate. From this vignette straight out of the Jim Crow South, I left 90% white St. Joseph and crossed the bridge to Benton Harbor where well over 90% of the residents are Black and nearly half live in poverty according to census data.Standing outside City Hall, Pinkney said to me, “You know, they offered me a Cadillac. I said, no, thank you.” The power elite in the county tried to buy him off to shut him up. It didn’t work. This is one reason he sits in Lakeland state prison today.

He did not shut up then, and he has not shut up ever since. From prison, he puts pen to paper and writes pages of condemnation of the corrupt, racist corporate-political-media establishment destroying his home community, the same one forcing him to eat prison food unfit for humans.

For years, he’s been preaching that this monstrous conglomeration of business interests and state authority is of a piece. Recently Pinkney wrote from prison:

“The vicious, cowardly attack on democracy in Benton Harbor, Michigan, shows that the corporate power structure is determined to crush anyone that stands in its way. The Whirlpool Corporation and government joined together to destroy the people of Benton Harbor. We call it fascism. It is part of the process underway across America in various forms. The once stable working class of Benton Harbor was devastated by automation and globalization and the community began to resist. They have to contain the struggle.”

Benton Harbor: the first city in Michigan subjected to the fascist rule of a state-appointed Emergency Financial Manager. What’s at stake? Whirlpool Corp., which raked in $177 million in profits last quarter(after expanding into Italy where it proceeded to lay off workers), wants to transform economically-devastated Benton Harbor into a private lakeshore playground for the wealthy. The vulture capitalists already succeeded in stealing part of a Benton Harbor public park for a Jack Nicklaus signature golf course next to a luxury condo development called Harbor Shores. We can expect to see more theft of land and resources from immiserated communities elsewhere as Whirlpool shows how easy it is to get full cooperation from state and local governments, despite opposition from the people.

Roger Bybee wrote, “There is no place in the United States that more cruelly illustrates the intensifying conflict between corporate power and democracy than Benton Harbor.” Pinkney saw it coming. For at least ten years, he’s warned that Benton Harbor is “the testing ground to see what they can get away with.” What comes to Benton Harbor is coming to your neighborhood soon. And what’s coming he named fascism and genocide, specifically Black genocide by means of globalization, gentrification, neglect, New Jim Crow injustice, and naked violence.

“In the 1960s, it was called Negro removal. In Bosnia, it was called ethnic cleansing. It could be called genocide, the removal of the minority population for the purpose of redevelopment of the land. That’s what’s happening in Benton Harbor and leading the resistance is Rev. Edward Pinkney.”

Any one of the battles Pinkney’s fought against this establishment would be cause for the wealthy to celebrate his imprisonment. (Indeed, at a county Republican meeting the county clerk and sheriff both received a standing ovation when they announced Pinkney’s conviction). He’s more than a thorn in their side; he’s a bulldog with a grip on their heel, not about to let go if it kills him. He remains indomitable, unbreakable. What spirit, what love moves a person to this kind of courage?

The same spirit, the same love that moves him now to spend his time in the prison library helping other prisoners with appeals and parole hearings. When he called me last week his most urgent request was not on his own behalf—he asked me to research felony penalty minimums and maximums in five states and mail it to him as soon as possible. During his last prison term in 2008, overturned on appeal after a year of illegal imprisonment, he wasted no time organizing for basic needs, soap and toothpaste, for his fellow prisoners.

Why is Rev. Pinkney in prison? Too many reasons to count. The timeline below hits some highlights, but still doesn’t paint a full picture of what he does that makes his resistance and leadership so dangerous to the master planners of the establishment.

For over a decade, he spent nearly every day that Berrien County court was in session court-watching, taking notes, and helping defendants understand their rights. Each week for years he led a group of community activists from Benton Harbor to march on the courthouse in St. Joseph wearing the famous “Berrien County’s Most Wanted” T-shirts, listing the most corrupt and racist judges and other county officials.After testifying at the trial, Marquette Coates said:

“They threw my testimony in the garbage. They don’t want to hear you. Rev. Pinkney helps people, especially young Black men. They are giving all these young men all this time for petty crimes. Everyone I know is getting 20 years or more. What are the children going to do? The parents, women are crying over their sons. What preacher besides Rev. Pinkney is there standing with the people?”

On one visit I found him at the public library. Every Tuesday he held “office hours” there, consulting with Benton Harbor residents about discrimination claims, legal problems, whatever problems with which he could lend a hand. I saw firsthand that his political work grows from deep roots and relationships in his community. For years, he organized monthly community-wide forums, bringing in outside speakers, with an emphasis on economic and political self-determination and standing up to police brutality and harassment.

I’d heard some observers question why Pinkney’s name figures so prominently in Benton Harbor activism, why we don’t hear more about other activists. I asked him and he answered that there are other grassroots leaders, but many people are too afraid to stand on the front line. Dorothy Pinkney lost her job because of her activism, and others have faced similar retribution for organizing with BANCO (Black Autonomy Network Community Organization). Whirlpool rules the county and Pinkney is David to its Goliath. After Judge Sterling Schrock sentenced him to 2½ to 10 years last December, I heard a woman from Benton Harbor lament, “This is to keep all of us quiet. Now we have no one.” The necessity of intimidating the rest of the community is yet another critical reason he’s in prison right now, and explains why a SWAT team delivered his arrest warrant for alleged date changes on a petition, blocking his street with trucks and police cars driving up and down the block.

Emma Kinnard, delegate for the 3rd Ward in Benton Harbor, said, “Benton Harbor is losing more and more ground. The school system is failing. Over at City Hall, things are manipulated. They’re giving off the land to the developers for nothing. With the arrests over the recall election, people are now afraid. They want people to say, ‘Don’t kick against the system.’ This is wrong.”

At his trial last October, I heard Prosecutor Mike Sepic question witnesses about Pinkney’s and their own participation in monthly meetings of the community group BANCO. This line of questioning was blatantly unconstitutional, apart from violating due process and Michigan Rules of Evidence—but it did give a partial résumé of Pinkney’s community organizing career. Sepic only proved that the charade of a trial was a New Jim Crow political lynching.

According to attorney Davis, “Given the thousands of irregularities in election petitions in Michigan every year, it’s clear that this is political prosecution in retaliation for successful community and electoral organizing. They like it until it looks like you are going to win. Two-and-a-half to ten years? He’s a political prisoner.”

These are some of the reasons he’s in prison today. The means by which they put and keep him behind lock and key in prison clothes, eating prison food, coping with the threat of prison violence, are almost incidental. They are mundane tactics of white supremacy: frame-ups, false charges, wrongful arrest, tainted and coerced witnesses, false testimony, all-white juries, lying jurors, for starters. Local judges who fully live up to the racist criminal justice system in which they are entrenched. Judges and prosecutors who violate the law, due process, constitutional rights—not to mention morality, reason, and common sense—with the only consequence being further reward for their gross misconduct. They follow this with excessive penalties, outrageous parole conditions, house arrest, electronic tether, excessively high bond or denial of bond altogether.

In 2009, Judge Dennis Wiley prohibited Pinkney from attending his own appeal hearing when he was unable to raise the $10,000 bond in time and remained under house arrest. All this for alleged non-violent crimes from someone who always met all conditions of parole. You have to see Berrien County court in operation to believe the arrogance and disregard for human life. It’s a Twilight Zone where judges can say anything with impunity. According to court observers, Berrien County judges have said, “I know you’re innocent and I’m going to put you away” and “I don’t care if there’s no law for this; I’m going to make one up.”

On August 5, a three-judge panel of the Third District Court of Appeals in Grand Rapids ruled 2-1 against Pinkney’s motion for bond pending appeal. Perhaps most insulting, the prosecution argued that Pinkney’s release would “undermine public confidence not only in the electoral process…but also in the justice system itself.” Of course, the truth is that the “justice system itself” is being used to subvert the electoral process. Interpreting the prosecution and judge’s arguments becomes an Orwellian word game.

ACLU of Michigan filed an amicus curiae brief in support of the bond motion stating that the conviction is “almost certain” to be reversed. Pinkney has already spent over seven months removed from his family and community. It could be many months more by the time the appeal is heard and decided. Pinkney will have “paid a debt to society he didn’t owe.”

We owe a debt to Pinkney. His courage and leadership have slowed, though not yet prevented, the wholesale destruction of a community of 11,000. The people of Benton Harbor need him back, and we need him out of prison where he can remain healthy and continue his warrior work.