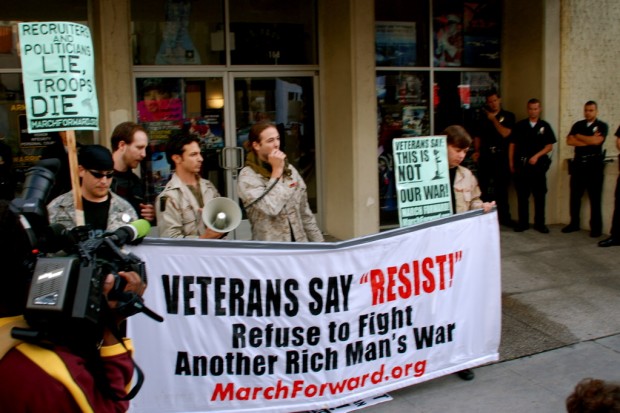 Why Is The Military Sacred?

From the archives of Sam Smith, 2006 – One of the most costly and immoral lies of our culture is that the military is a sacred institution. John Kerry recently bumped into this lie while telling a truth, that as a practical matter, one shouldn’t mention a week before the election, namely that the military has always been a haven for those who couldn’t hack it in the civilian economy. “Education. . . if you make the most of it and you study hard and you do your homework, and you make an effort to be smart, you can do well,” said Kerry “If you don’t, you get stuck in Iraq.” You need only watch the military’s own recruiting ads to know the importance of the economic harbor. Which is why these ads promise to train you so you’ll be able make it in the ‘free market’ when you go back. The military is America’s largest religion. If in public office, you may no more take its name in vain than those of the lesser gods revered by more modest religions like Christianity. In fact, the military has a permanent exemption from the strictures of Christianity. Otherwise, instead of going after cohabiting gays, the church’s right wing would be attacking the Pentagon for violating such strictures as:

“The law will go out from Zion, the word of the Lord from Jerusalem. He will judge between the nations and will settle disputes for many peoples. They will beat their swords into plowshares and their spears into pruning hooks. Nation will not take up sword against nation, nor will they train for war anymore.”

“You have heard that it was said, ‘Eye for eye, and tooth for tooth.’ But I tell you, do not resist an evil person. If someone strikes you on the right cheek, turn to him the other also. And if someone wants to sue you and take your tunic, let him have your cloak as well. If someone forces you to go one mile, go with him two miles. Give to the one who asks you, and do not turn away from the one who wants to borrow from you. You have heard that it was said, ‘Love your neighbor and hate your enemy.’ But I tell you: Love your enemies and pray for those who persecute you, that you may be sons of your Father in heaven.

“Never pay back evil for evil to anyone. Respect what is right in the sight of all men. If possible, so far as it depends on you, be at peace with all men. Never take your own revenge, beloved, but leave room for the wrath of God, for it is written, ‘Vengeance is Mine, I will repay,’ says the Lord. ‘But if your enemy is hungry, feed him, and if he is thirsty, give him a drink; for in so doing you will heap burning coals upon his head.’ Do not be overcome by evil, but overcome evil with good.”

“Put your sword back into its place; for all those who take up the sword shall perish by the sword.”

But none of that matters to the Christian apostates who control the discussion of both religion and the military in our political debates. These frauds have blasphemed their own purported religion and betrayed its fundamental principles. And nowhere is this more apparent than their allegiance to the military, the most un-Christian institution of our world. Of course, if you’re a Seventh Day Agnostic like your editor, you can get away with saying such things. It is those who seek power but can’t quite get the hypocritical rhetoric down who end up in trouble. Like John Kerry who was taken to the reamers for violating the first law of heroism – let someone else do the talking about what you did – and who now is in trouble for not seeing the military as heroic enough. It’s often like that; it’s the errant priests who get into real trouble, not the outlanders, the unsalvageable. And the reason he is in trouble is because not just the GOP spin machine but everyone in public office and the bulk of the media believe one should speak no evil of the military. On no single issue, is the media’s pretension of objectivity more regularly violated. Its true purpose in this matter is to perpetuate the myth of the sacred role of the warrior. In fact, as Joseph Conrad noted, the hero and the coward are those who, for one brief moment, do something out of the ordinary. At least the ones we honor, that is. The career firefighter, the inner city grandmother raising six grandchildren whose father is in jail and mother has a lousy job, or the teacher year after year helping to save those who society has preemptively discarded are not treated as sacred, as heroes, or as worthy of special honor during political campaigns and or on the evening news. But killing some Iraqis, or being killed by them: that’s the real thing. That’s why you won’t hear any politician or commentator quoting Eugene Debs: “I would no more teach children military training than I would teach them arson, robbery, or assassination.” There is also the little problem of winning. If you’re going to justify war without concern for its morality, you still are left with the practical problem of victory. Since World War II, America has had no victories save against minor military enemies such as Granada. Even if we were to declare victory against Iraq it would be the equivalent of Notre Dame defeating St Joseph’s Junior High School. I sometimes fantasize that war will be the slavery of the 21st century, which is to say a concept once widely accepted is turned into the pariah practice it should always have been. For this to happen abolitionism will have to replace pacifism; it is not the good of the resister that is important but rather the evil of the practitioner. We need to demystify the military, pointing out not just its moral weaknesses but its logical fallacies. We should sensibly regard people who walk around with pins on their chests celebrating their life as, at best, somewhat unstable. And we need to remind the media that it can not call itself objective and repeatedly rebuff the voices of peace.