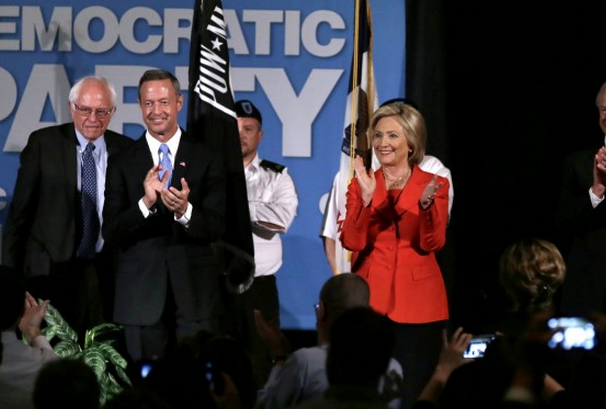 Why Liberals Have To Be Radicals

Note: The politics of radical transformation are becoming more evident to a wider audience. We have always considered Robert Kutner of the American Prospect to be a solid partisan, Democrat who supports the Democratic Party agenda and is slightly left of center of Democratic Party views but still in the mainstream. In the article below he states what is obvious to many readers of Popular Resistance, participants in Occupy, Black Lives Matter and so many other parts of the movement for social, economic and environmental justice. Kutner highlights that today’s politics — even the politics of so-called socialist Bernie Sanders — do not come close to actually solving the economic, environmental, racial and social problems of the United States. This is part of the process we are in as a movement — developing national consensus for radical transformation. The movement is highlighting reality so it can be seen.

Just about nothing being proposed in mainstream politics is radical enough to fix what ails the economy. Consider everything that is destroying the life chances of ordinary people:

The New York Times‘s Noam Scheiber, using Bureau of Labor Statistics data, calculated that raising the minimum wage to $15 for the period 2009 to 2014 would have increased the total income for the 44 million Americans who earn less than $15 an hour by a total of $300 billion to $400 billion. But during the same period, Scheiber reported, the top 10 percent increased its income by almost twice that amount.

So even if we’d raised the minimum wage to $15 an hour, the top 10 percent would still have emerged from the 2009-2014 period with a substantially larger share of the increase in the nation’s income than the bottom 90 percent. Inequality would still have increased, just not by as much.

Restoring a more equal economy simply can’t be done by raising incomes at the bottom, even with a minimum wage high that seemed inconceivable just months ago. It requires going after the grotesquely concentrated wealth and power at the top.

Restoring a more equal economy simply can’t be done by raising incomes at the bottom, even with a minimum wage high that seemed inconceivable just months ago. It requires going after the grotesquely concentrated wealth and power at the top.

Last week, another writer in the Times, Eduardo Porter, assessed Hillary Clinton’s eagerly anticipated speech on how to rescue the middle class.

Mrs. Clinton’s collection of proposals is mostly sensible. The older ones — raising the minimum wage, guaranteeing child care to encourage women into the labor force, paying for early childhood education — have a solid track record of research on their side. The newer propositions, like encouraging profit-sharing, also push in the right direction.

But here’s the rub: This isn’t enough.

The budget deadlock and the sequester mechanism, in which both major parties have conspired, makes it impossible to invest the kind of money needed both to modernize outmoded public infrastructure (with a shortfall now estimated at $3.4 trillion) or to finance a green transition.

The economy is so captive to financial engineers that even interest rates close to zero do not help mainstream businesses recover. There is still a vicious circle of inadequate purchasing power and insufficient domestic investment.

The rules of globalization and tax favoritism make it more attractive for companies to assemble products, export jobs, and book profits overseas.

To remedy the problem of income inequality would require radical reform both of the rules of finance and of our tax code, as well as drastic changes in labor market regulation so that employees of hybrids such as Uber and TaskRabbit would have both decent earnings and the protections of regular payroll employees.

Congress would have to blow up the sequester deal that makes it impossible to invest money on the scale necessary to repair broken infrastructure and deal with the challenge of climate change.

Politicians would have to reform the debt-for-diploma system, not only going forward, as leaders like Bernie Sanders and Elizabeth Warren have proposed, but also to give a great deal of debt relief to those saddled with existing loans.

Unions would need to regain the effective right to organize and bargain collectively.

Somehow, in the postwar era, ordinary people enjoyed economic security and opportunity; and despite the economy of broad prosperity, there were plenty of incentives for business to make decent profits.

This is all as radical as, well, … Dwight Eisenhower. Somehow, in the postwar era, ordinary people enjoyed economic security and opportunity; and despite the economy of broad prosperity, there were plenty of incentives for business to make decent profits. There just weren’t today’s chasms of inequality.

But the reforms needed to restore that degree of shared prosperity are somewhere to the left of Bernie Sanders.

This is one of those moments when there is broad popular frustration, a moment when liberal goals require measures that seem radical by today’s standards. If progressives don’t articulate those frustrations and propose real solutions, rightwing populists will propose crackpot ones. Muddle-through and token gestures won’t fool anybody.