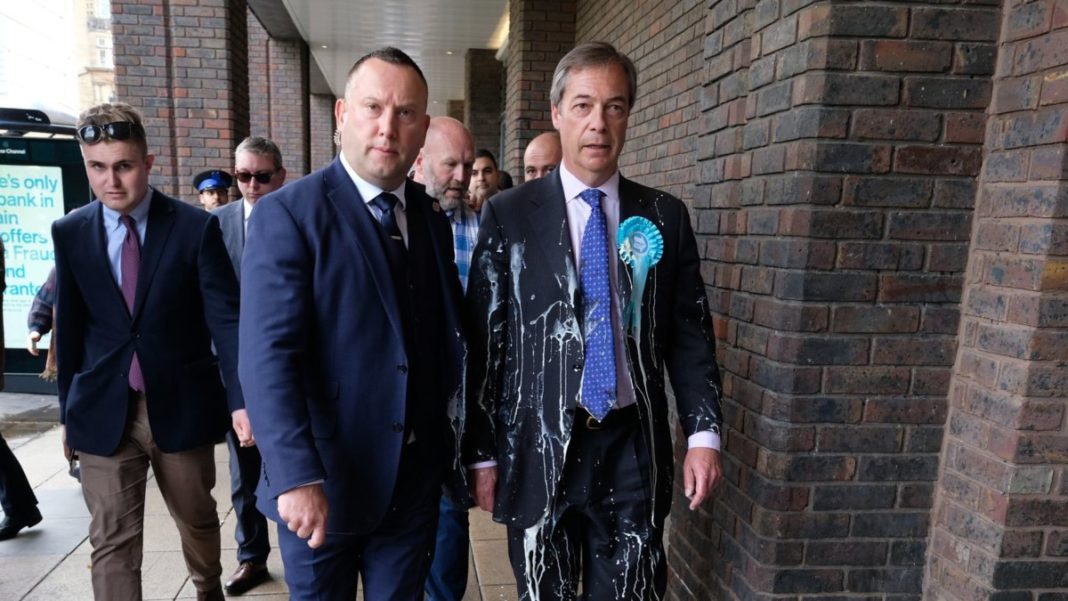 Why Milkshaking The Far-Right Is Going Viral

On both sides of the pond, far-Right political figures have been getting milkshakes thrown at them, and they are very upset. Here’s a look at just what is going on for those that are unaware of the newest viral sensation.

The fad started on May 2nd of this year, when Tommy Robinson (a British candidate for EU parliament) approached a Pakistani-British man (Danyaal Mahmud) on the street, and started harassing him. Tommy followed after Danyaal as he tried to leave, with left-wingers escorting Danyaal and right-wingers trailing after Tommy. Things grew heated, and Danyaal found himself cornered. Scared and out of other options, Danyaal threw the remains (a milkshake) of his lunch in Tommy’s face. Tommy grabbed Danyaal’s head and savagely rained blows down upon him, until Tommy was pulled off by police and civilians. The video of this went viral, with 5.7 million views as of this writing.

This was actually the second-time someone had thrown a milkshake on Tommy, though I cannot find details on the first, nor can I find any evidence of a connection between Danyaal’s act of desperation and whatever happened the first time. As far as I can tell, Danyaal had no intention of becoming a political icon and really just wishes people would leave him alone.

Regardless, the video has inspired others. Carl Benjamin, another British candidate for EU parliament, has had milkshakes thrown on him many times.

First off, some historical context. Throwing food at politicians isn’t a new idea, nor is it something only done to the far-Right. Here’sSchwarzenager talking about getting hit with an egg in 2003. Here are two French presidential candidates getting pelted with flour in 2012 and 2017. The Australian prime minister just got hit with an egg, and the pigs arrested her for it.

So, the basic concept isn’t terribly new or exciting. What is exceptional about throwing milkshakes at far-Right figures, though, is how goddamn mad it makes them. Schwarzenager, when asked about his egging, joked that the guy owed him bacon, and said that the ability to protest him like that was part of what he loved about America. The French candidates mostly just hurried off. The Australian prime minister was a bit closer to the far-right in his reaction (he called the woman a thug and had his goons arrest her) but even that managed to appear more dignified than the far-Right’s reaction of bizarre fear.

Nigel Farage has been trying to tour Britain by bus, to promote his (far-Right) Brexit Party. In the past, he’s said that he would “don khaki, pick up a rifle and head for the front lines” if Theresa May fails to deliver Brexit in the fashion he wants.

Which now feels like a very unconvincing statement, given that he refused to get off his bus in Kent, because a couple of dudes were standing around it, holding milkshakes. Before that, in Newcastle, Nigel got pelted with a milkshake and responded by fleeing the scene and losing his shit at his bodyguards. He later referred to the milkshake as “an affront to democracy.” The milkshaker was arrested. There are rumors of him being ‘menaced’ (to stretch the definition of that word to the breaking point) by larger groups with milkshakes, but I cannot confirm those at this time.

The far-Right’s establishment allies have their backs on this, too. Both the “centrist” politicians Tim Farron, the leader of the pro-Europe Liberal Democrats, said:

“I’m not laughing along with the attack on Farage. Violence and intimidation are wrong no matter who they’re aimed at. On top of that, it just makes the man a martyr, it’s playing into his hands.”

And the pigs, who made McDonald’s in Edinburgh stop selling milkshakes for several hours around a Farage rally.

(Burger King, meanwhile, responded by tweeting out that they were still selling milkshakes. There are plenty of commentaries on this, but making them would be beside the point of this article.)

There’s one recent example of a “milkshaking” happening in the US, against a member of the Hiwaymen, most known for attending Unite the Right and attacking trans youth in Kentucky. Regardless of the context, Right media is freaking out, calling it political violence. We have Sam Harris, who once wrote an article advocating the use of torture, now whining about it. He even called them “mock assassinations.” More on that in a bit, because he’s actually correct, and it’s great.

Remember those Hiwaymen that assaulted trans youth at the Capitol on March 31st? They showed up to Planned Parenthood…and got milkshaked.#PositivePraxis pic.twitter.com/RmMGUo4ILJ

The New Republic put it best when they said:

…milkshaking is so potent against Farage and his brethren… [because] it humiliates them. Nothing animates the far right or shapes its worldview quite so much as the desire to humiliate others—and the fear of being humiliated themselves. It’s why alt-right trolls, projecting their own sexual insecurities, enjoy calling their opponents “cucks.” It’s why they rally around blustery authoritarian figures like Donald Trump who cast themselves as beyond embarrassment, shame, or ridicule. They brandish humiliation like a weapon while craving release from it.

Getting doused in a milkshake robs far-Right figures of the air of chauvinistic invulnerability that they spend so much time cultivating. They hunger to be taken seriously despite their racist views. They want to be described as dapper, to be interviewed on evening news broadcasts and weekend talk-show panels, and to be seen as a legitimate participant in the democratic process. Most politicians to the left of Enoch Powell would brush off milkshaking as a harmless stunt. For those seeking mainstream legitimacy, it’s another searing reminder that they don’t belong.

…What the far right fears more than anything else isn’t a defeat at the ballot box or a temporary setback in policymaking. It’s the sting of shame that comes from being humiliated in public. I personally oppose violence in all forms, so I wouldn’t be able to bring myself to throw a milkshake at the nearest racist I encounter. But I don’t need to believe in it to recognize how effective it is at shaming the far-Right.

Even beyond this, though, we have to understand the profoundness of the dichotomy at play here. These guys have consistently called for horrible violence, in numerous ways, against numerous targets. But the actual reality of that “violence” is that it’s actually quite light and mocking. It’s milkshakes. It’s nothing. No one is going to die because they got hit with a milkshake. But they will run and hide from it.

More than that, though, liberals are extremely comfortable with these guys getting milkshaked – comfortable in a way that they aren’t with them getting punched. It’s just a bit of fun to them, and even they aren’t dumb enough to really believe the fash and “centrists” when they start whining about political violence. We can use that. As Huck Magazine put it:

Our screens and feeds are filled with coverage documenting, and sometimes assisting, the rise of the far-Right, in a way that feels incredibly overwhelming and disempowering. Now, we see an islamophobic figurehead in the running to be an MEP for the seat previously held by Nick Griffin, and although a milkshake being thrown is a viral joke on the face of it, the comic relief is timely. While I don’t think anyone is seriously conceptualising isolated, one-on-one confrontations (which may result in the confronters being done for assault) as the most viable means of tackling the terrifying problem of fascism, these incidents of virality say something about how we’re all feeling.

This is an “anti-fascism” (to stretch that word to hell and back) that the liberals can actually see themselves doing.

They’re not totally wrong. This actually can escalate – though, of course, in practice this is actually a de-escalation. Milkshaking is something of a training game, in that it can get liberals comfortable with doing harder stuff in a fairly safe-feeling environment. It’s like Avery Alder’s Brave Sparrow in its effects – though a little bit harder core, and aimed at adults. It teaches them how to think in terms of strategy, tactics, and asymmetric warfare. This is all fantastic stuff.

All these assaults are mock assassinations (whether the perpetrators know it or not). Pies, milkshakes, glitter, etc. reveal unavoidable weaknesses in the security of their targets and advertise their vulnerability to the whole world. The result is worse than it appears.

Well, Sam isn’t wrong either. The only word I’d swap is ‘better’ for “worse.”

One might argue that this gives the fash and/or the State the opportunity to patch exposed security holes, but I disagree. I think that we have always had more power than we realized, and that proving this to everyone is fantastic.

These are mostly candidates or members of legislatures, not heads of State – who are already beyond the reach of the public. These sorts of lower-level guys can only really patch these security holes by either radically reducing their exposure to the public or radically increasing their hired security. Both options serve only to broadcast that they’re actually very unpopular – you can’t really credibly claim a mandate from “the people” while also hiding from “the people.”

Further, I don’t think that they can actually reduce their risk (by doing either, or both, of these options) enough to effectively eliminate it – you can only avoid the public so much, and hiring 24/7 armed guards for every candidate and representative is very expensive. Either they’re going to bare that expense privately or that’s going to be borne publicly. The first seems more likely, but the second one would be mean more expense for the taxpayers, and thus be even less popular.

“shake zula, the mic rula, the old schoola, you want a trip, i’ll bring it to ya”
🏴🥤🏴 pic.twitter.com/RurdEieisN

Even if we do this stateside to street-level fash, I think it still might work. These guys are harder to embarrass, but it makes them look just as weak as beating their asses does, and with much greater support from liberals. I’m fully willing to at least give it a try, though I’ll admit that my heart still says “punch” and not “milkshake.”

So: pick up a milkshake, comrades. Let’s see just how far we can push this.