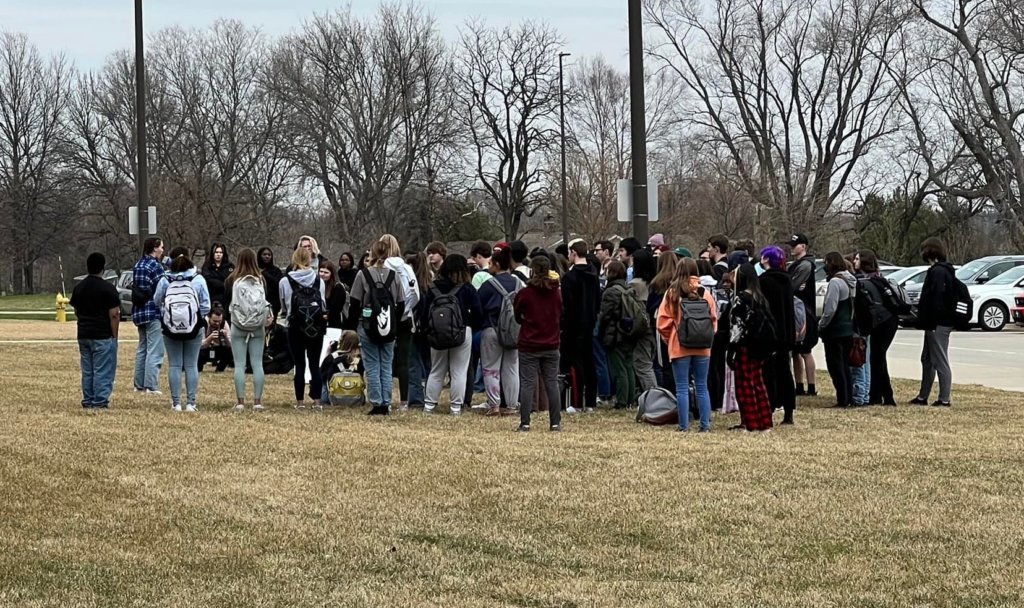 Why More Students Are Walking Out At Iowa Schools

Johnston, Iowa – In light of recent education bills at the Iowa Legislature, whether it’s promoting vouchers for private schools or restricting what teachers are allowed to mention in class, many Iowa students are getting fed up. And they’re standing up.

Friday afternoon in Johnston, a group of close to 100 students walked out of class and stood on school grounds to talk about those bills, explain how they’re impacting Iowa students and teachers, and encourage their peers to register to vote and to elect different legislators.

“I think the biggest thing now is putting people in positions of power that actually will do the work and will care and represent the student voices that are speaking out about this,” said Waverly Zhao, a junior at Johnston High School who helped lead the walkout.

The walkout was organized by students and two student organizations, Johnston Community of Racial Equity (CORE) Club and Iowa WTF.

And Johnston was only one of several with recent walkouts. Thursday, students walked out at Ankeny and other events have been planned for public and private high schools in Ames, West Des Moines, Des Moines, and possibly Waukee. All are organized by student groups, and generally around the same issue of not having their voices heard about their educations. Students have also held walkouts in recent months in Iowa City, Cedar Rapids and Waterloo.

Specifically, students are calling out House File 2577, the bill that requires teachers to post every single piece of classroom material online, and Senate File 2369, the bill which allows vouchers for private schools and includes a parents’ bill of rights. Both have only passed in their chambers.

Students are also calling out House File 802, the law that prohibits so-called “divisive concepts” being taught in school, which passed last year.

“That’s why I did this walkout and that’s why all the central Iowa schools did the walkout, so that we can educate students about these bills and then hopefully they will start talking about these and bringing up conversations with their parents, who can potentially vote,” Zhao said.

HF 802 prohibited teachers from teaching “divisive concepts” and targets ideas such as systemic or institutionalized racism and sexism, and how those have shaped the way the country was built and how it functions now. Students say they’ve already seen it cause a chilling effect in their classrooms.

“As a student of color, it’s been hard enough in the district, and with the recent legislation, it’s harder to discuss racism and harder for us to combat that in schools,” said Anita Danakar, a Johnston high schooler.

For example, she said her history teacher made sure to tell students they weren’t trying to make student feel guilty when they talked about redlining in class.

Zhao said in her history and social studies classes teachers are talking less about racism and sexism so they don’t cross any lines. A history lesson she had about the 3/5ths compromise in the Constitution left most of the class confused, Zhao said, because the teacher was never quite able to explain why it existed.

The 3/5 Compromise stated that enslaved people were considered 3/5 of a person in order to boost the population of primarily Southern states, which tended to have lower populations otherwise and would then have had fewer members of the House of Representatives.

Theo Young, another student at Johnston High School, said the law has had a chilling effect on discussions of LGBTQ issues too.

“As a queer student of Johnston, it’s really gross to see that overreach from the government, to come in and politicize our education,” he said.

Theo said his teachers have also talked about worrying how to address different topics.

“There’s a different atmosphere at the school,” he said. “The laws are purposely worded vaguely so that it could be a lot of things that could get them in trouble.”

Overall, the students said they want to learn about these topics in school, from a trusted source and in an environment where they can ask questions.

“This entire attitude that [says] these students are not mature enough to learn and have mature conversations in the classroom about race, gender, sexuality, to say we can’t even talk about that in an educational environment is disgusting,” said Nicholas Arick, a 17-year-old student who plans to vote in the next presidential election. “It’s saying these students don’t deserve to learn about these things, and eventually when they get out of high school, they’re be ignorant and they won’t know what they’re voting for.”

“I don’t want these discussions to never happen and then I have to go find information on the internet … which might have been altered in some sort of way,” he continued. “I want it to be done in an educational way.”

Students were happy with the number of people who turned out for the walkout, though there were the occasional jeers and a shout of “Kim Reynolds” from other students driving out for the day. Some noted the ongoing political divides in school where students tend to talk past each other.

“They don’t know why we were standing out here, they just know that someone was going against the status quo … they just know we were out there protesting, and now they need to get mad at us,” Arick commented. “We have lawmakers pushing away these conversations so that we never talk to each other, then you have two sides isolated from each other.”

Zhao emphasized that what they were asking for was for parents and lawmakers to simply put some trust in schools and students to have these discussions and not try to control everything that is said in a classroom.

“If they are worried, if they do think it’s inappropriate, talk about it with your kids, like, have those open conversations,” she said. “Because ultimately, just completely striking it from the conversation is what causes ignorance and what causes the spread of misinformation.”