Why Nazis Are So Afraid Of These Clowns

Trolls chanted in the streets the day of a planned neo-Nazi rally in the small ski town of Whitefish, Montana earlier this year. But they were not the trolls that residents had been expecting — namely, white supremacists from around the country, who had been harassing the town’s Jewish community with death threats.

These trolls wore bright blue wigs and brandished signs that read “Trolls Against Trolls” and “Fascists Fear Fun,” cheerfully lining the route where the neo-Nazi march had been slated to take place. Due to poor organizing and the failure to obtain proper permits, the demonstration had fell through, leading to what the counter-protesters gleefully deemed a “Sieg Fail.” So, locals held their own counter-event, gathering together to share matzo ball soup and celebrate the town’s unity, which — with a dose of humor and a denunciation of hatred — had successfully weathered a right-wing anti-Semitic “troll storm” and strengthened the community as a whole.

Using humor and irony to undermine white supremacy dates back to the days of the Third Reich, from jokes and cartoons employed by Norwegians against the Nazi occupation to “The Great Dictator” speech by Charlie Chaplin. In recent years, humor has continued to be used as a tactic to undermine Nazi ideology, particularly in the unlikely form of clowns — troupes of brightly-dressed activists who show up to neo-Nazi gatherings and make a public mockery of the messages these groups promote. It puts white supremacists in a dilemma in which their own use of violence will seem unwarranted, and their machismo image is tainted by the comedic performance by their opponent. Humor de-escalates their rallies, turning what could become a violent confrontation into a big joke.

Satirical imitation was used in Olympia, Washington in 2005 when a dozen members of the National Socialist Movement paraded around the state capitol to recruit members for the coming “race war.” They were met with clowns mimicking the “Seig Heil” salute and goose-stepping in a public mockery that drew attention away from the Nazi demonstration and undermined their image to would-be supporters. 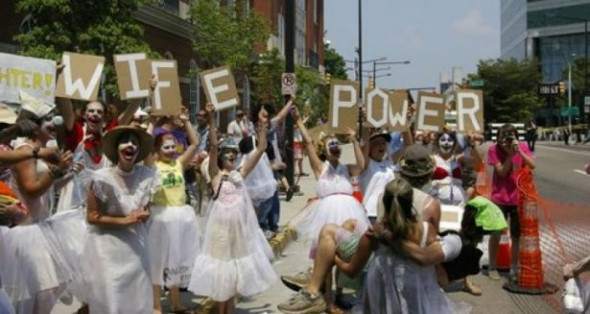 In 2007, the group Anti Racist Action staged a full-fledged clown performance at a neo-Nazi rally in Knoxville, Tennessee. The clowns feigned confusion at demonstrators’ cries of “White power!” and called back, “White flour?” as they threw fistfulls of flour into the air.

“White power!” the neo-Nazi group shouted, and the clowns pretended they finally understood their mistake. “Oh, white flowers!” they cried out, handing white flowers to passersby, including some of the neo-Nazis themselves.

“White power!” they yelled again. “Tight shower?” the clowns called back, holding a shower head in the air and crowding together in a ridiculous attempt to follow the directions of the white supremacist group.

They tried once more: “White power!” And the female clowns exclaimed, as though they finally understood, “Wife power!” raising letters in the air to spell out the words and hoisting the male clowns in the air, running around and carrying them in their arms.

The clowns stole the show, and continued parading through the streets with the police smiling happily at their sides while the neo-Nazi group called off their demonstration several hours early. This action inspired clowns in Charlotte, North Carolina to also yell “Wife power!” at a white supremacist rally. They also held signs that said “Dwight Power!” next to photos of the NBA player Dwight Howard.

Anti-Nazi clowning can also turn into a wider community event, bringing local people together in solidarity and fun. A recent New York Times editorial highlighted an “involuntary walk-a-thon” in Wunsiedel, Germany, organized in response to an annual neo-Nazi march. The organizers drew chalk markers on the pavement marking the starting point, halfway point and finish line. Local residents and businesses pledged to donate 10 euros for every meter the white supremacists marched to a group called EXIT Deutschland, which is dedicated to helping people leave right-wing extremist groups. 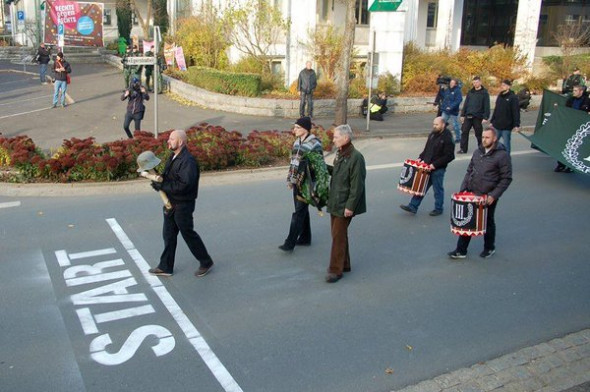 Neo-nazis take part in the “involuntary walk-a-thon” in Wunsiedel, Germany in 2014. (Twitter / @exitdeutschland)

People came out to cheer the marchers the day of the event, flanking the route with signs that read “If only the Fuhrer knew!” and “Mein Mamph!” ( or “My Munch”) by a table of bananas offered to the walkers. This turned the marchers into involuntary supporters against their own cause, and brought the community together in unity to counter the messages of white supremacy.

Other European cities have employed clowns to counter anti-immigrant groups. For example, the “Loldiers of Odin” formed in Finland to counter a citizen patrol called Soldiers of Odin. The clowns danced around the streets the same nights that the patrols went out in the community, bringing acrobat hoops and a hobby horse. They also danced around the “soldiers” while playing in the snow. Their actions countered right-wing propaganda of making the streets “safer” from immigrants by bringing humor and silliness to their actions.

Clowning as a tactic of creative resistance was first developed by a group of U.K. activists who started the Clandestine Insurgent Rebel Clown Army, or CIRCA, in 2003. Mixing slapstick humor and improv theater with civil disobedience, the group had — at its height —over 150 trained clowns in Edinburgh, and their tactics were adopted by activists across Europe and the United States.

Humor has wide-reaching potential beyond clowning in countering neo-Nazis. It can be employed in the form of a serenade, like the sousaphonist who played his instrument to a crowd of Confederate flag-wielding marchers in Columbia, South Carolina. There’s also the parody song “Tiki Torch Nazis,” written and performed by a couple from San Francisco, that went viral after Charlottesville and hilariously undermines the serious image neo-Nazis strive to present. Meanwhile, in the United Kingdom, a group called the English Disco Lovers, or EDL, uses its acronym along with dance music and 1970’s style wigs to subvert public gatherings of the racist English Defense League. 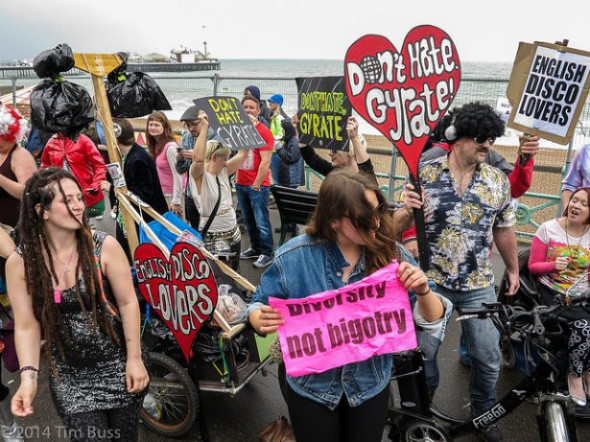 To build on past successes of anti-Nazi clowning, activists and local organizers can draw on the creativity of the community to devise actions and events that mock white supremacist ideology and those who support it. This could be done in the form of a carnivalesque “Fascist Fair,” complete with a dunk tank and jousting match. It could take the form of dressing up in costumes that satirize the labels white supremacists have given counter-protesters, like vermin or Communists. Events can draw in various local groups, from marching bands to theater troupes to intramural sports teams so that resistance to white supremacy becomes a community expression of solidarity, like in Whitefish, Montana.

Counter-demonstrations can employ a tactic called détournement, or culture jamming, to draw on existing cultural symbols that resonate with a wider audience. This could involve staging a humorous match in which one side represents neo-Nazis dressed as Death Eaters from Harry Potter, and the other side represents Gryffindor, or the Avengers, or Wonder Woman and the Amazon warriors. Their marches can be accompanied by a mass choir drowning out their chants with refrains of “You’re So Vain” or JoJo’s “Leave (Get Out).” They could also be met with “Flash Mobs Against Fascist Mobs.” The street where the march is planned could be covered in rainbow paint and glitter that will coat the bottoms of their shoes.

Beyond the marches themselves, clowning can undermine Confederate statues and symbols when their removal would lead to an escalation of violence, as activist David Swanson has suggested. Dressing up Confederate statues as clowns or jokers with signs like “You must be joking!” mocks the statue itself and undercuts the veneration of historical figures who represent the country’s legacy of slavery.

Other creative tactics can be used to counter neo-Nazi propaganda with less direct confrontation. Activists around the world have turned Nazi graffiti into art, like the #PaintBack campaign transforming Swastika’s into cartoon animals.

These actions not only deflate the macho image of neo-Nazis to their own supporters — which is strengthened by violent confrontation — but they also engage the community in planning fun collective actions to counter hate and intolerance. Humorous counter-demonstrations unleash a storm of creativity, as activists and local groups collaborate to design creative actions together. In the end, the actions bring communities together against hate speech. Since humor and clowning can incorporate so many community members — children and the elderly, musicians and athletes, politicians and school teachers — they draw everyone into a joyful, silly expression of solidarity. That’s something a band of tiki torch-wielding neo-Nazis don’t stand a change against.