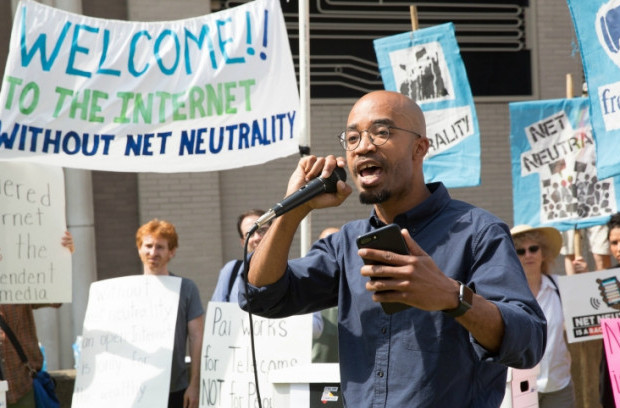 Why Net Neutrality Is A Working-Class Issue

Above Photo: A protest to defend net neutrality in Washington, D.C. on May 18. (Free Press)

You might have noticed your browsing experience was interrupted by a call-to-action on Wednesday, July 12. Amazon, Netflix, Etsy, OKCupid and hundreds of other sites covered their loading pages with banners and images asking you to save the internet. Millions of us joined together to protest the Federal Communications Commission (FCC), heeding the call from grassroots activists across all corners of the web.

Led by President Donald Trump appointee Ajit Pai, the FCC is working to roll back rules that ensure the free and open flow of information on the internet. The body is attempting to undo the partial classification of the internet as a utility (meaning something every person has the right to have), and to massively expand the rights of Big Cable to lie about speeds and other services in order to make huge profits. These efforts pose a threat to net neutrality, the principle at the foundation of the internet that internet service providers treat all traffic equally. Net neutrality supports the open and free flow of information—without discrimination and without favoring content or services.

Make no mistake: Net neutrality is one of the defining workers’ rights and civil rights issue of our time. We all know the internet is driving changes in culture, politics and the economy. It is also one of the key spaces where workers can organize—and where mass movements for racial and economic justice blossom and build power.

Companies like Wal-Mart, the nation’s largest private employer, have a long history of monitoring employees’ online activities as workers move to unionize. Meanwhile, more and more workplaces exist remotely or at home, whether you are a homecare worker supporting a person with disabilities in their independence, a gig worker in an Uber or Lyft car, or a salesperson for Amazon or Etsy.

In this economic climate, net neutrality has a huge impact on your ability to build community, solidarity and unity in your workplace. Big telecom companies, in their never-ending quest to make more money from workers, will use any cutback in net neutrality rules to put tolls along the internet with extra charges and fees. The impacts are going to be acutely felt, making it costlier for remote workers to do their jobs and connect with others on the job. We know who benefits from employees feeling strapped and isolated: the boss.

If we kill net neutrality, we will make it more politically possible for Comcast, Verizon, AT&T and other big telecom providers to raise their prices and sell your private data for profit. Net neutrality is an important protection that working-class people and communities of color need, considering the history of predatory practices of telecom providers and the tightening wallets of Americans who aren’t part of the one percent. People of color, women, LGBTQAI communities and immigrants are already underrepresented in the media. If you can’t represent yourself, someone else will—and probably get it wrong.

The big telecoms behind the FCC’s push to kill net neutrality fight their own workers every day. Verizon in 2016 proposed cuts so deep to wireline workers represented by Communications Workers of America that the nearly-40,000-member union went on strike for more than a month—and won.

Comcast, in their hometown of Philadelphia, opposed a city-wide, paid-sick-leave policy in 2014. The corporate giant that also owns NBC spent the past year backing a lawsuit against Philadelphia City Council’s attempt to address the wage gap. When it comes to the rules that govern the web, you can be sure that big internet service providers are going to care more about their bottom line than workers, poor people and people of color.

Big cable and the FCC claim that relaxing net neutrality will allow for “innovation.” But workers should reject any claim of “innovation” from companies that have redlined communities of color, and kept our choices of service providers to one or two maximum, in almost every market in the United States. For those of us who are committed to the long arc of justice, innovation looks a lot different. Innovation means nurturing the internet as a critical tool for the growth of social movements and making the world we all deserve possible.

As Patrisse Cullors, co-creator of #BlackLivesMatter, put it in an op-ed defending the rules the last time the decision came to a head: “It’s because of net neutrality rules that the internet is the only communications channel left where black voices can speak and be heard.”

Wednesday’s action was led by some of the strongest voices protecting working-class people and communities of color in exercising their right to communicate and access information, including Center for Media Justice, Color of Change, Fight for the Future and Free Press. The protest generated more than two million comments to the FCC, five million emails to Congress and nearly 125,000 calls to Congress. We believe this single day of online action was the biggest—ever—in the history of the internet.

This breadth of involvement is a useful reminder that net neutrality isn’t a fringe issue. It’s an issue core to our identity as U.S. freedom fighters. It shapes the very terrain and conditions we struggle in, and the nature of the democracy we are trying to win. If you are a worker, fighting for justice, you are fighting for net neutrality too.