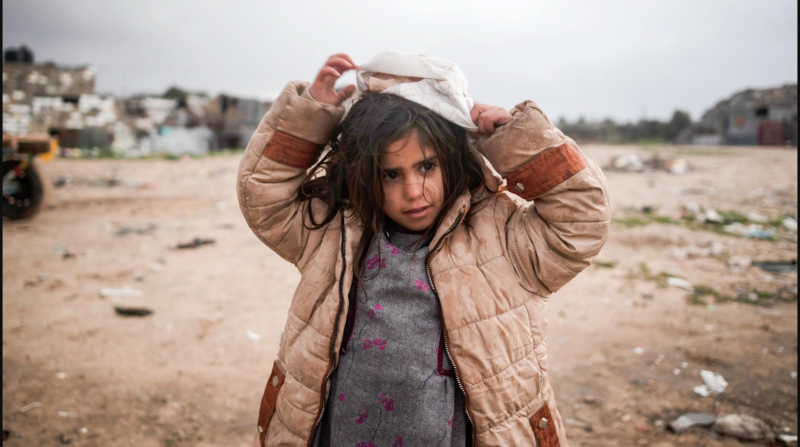 Above Photo: A Palestinian girl stands outside her family home during a cold weather spell in a slum on the outskirts of the Khan Younis refugee camp, southern Gaza Strip, Jan. 19, 2022. Khalil Hamra / AP.

The Dialogue Phenomenon Tries To Cover Up The Fact That Millions Of Palestinians Are Displaced And That Despair Is All That Life Has To Offer Them. But It Provides No Hope, No Solution, Only A Guarantee That Things Will Continue To Get Worse For Palestinians.

Occupied Palestine – When no one is steering the ship, the wind, the currents and the waves lead it into the depths. This is what is happening in Palestine. The Naqab is burning, Sheikh Jarrah is burning, young and old Palestinians are being killed everywhere, Gaza is practically underwater with flooding, and Palestinian refugees are barely alive in camps throughout the region. Furthermore, in the U.S. capital there isn’t a single entity that represents Palestine; and, in those rare capitals where some representation does exist, it is quite useless.

Palestinian refugees, both in Palestine and in the neighboring countries, not only are forgotten but are also being allowed to perish slowly as the world denies them meaningful relief. Living in camps built 75 years ago that were only supposed to house them temporarily; living through the hunger, poverty, constant bombardment and terrorizing by Israel. In addition to all of that, wars and massacres by various groups – usually working in collusion with Israel — have made their lives a living hell.

The United Nations Relief and Works Agency, or UNRWA, was created to care for the Palestinian refugees but it is not really able to care for all of them. As mentioned in an earlier article in this publication, the legal case for reparations and return is strong. However, the same study that made that legal case also revealed that there are legal distinctions between refugees, and, while these distinctions are unseen, they exist and make a great deal of difference in what little relief refugees are able to receive.

The dismal funding UNRWA has received over the years was barely enough to allow the Palestinian refugees to survive. Then, in 2018, under Zionist direction, President Donald Trump proudly announced that his administration was going to end all funding to UNRWA. If that was not enough, according to a 2021 Al-Jazeera report, “The United Kingdom cut more than half its funding to UNRWA. It went from $56.5 million in 2020 to $27.6 [million in 2021].” The report also states that wealthy Gulf states that once contributed $200 million provided only $20 million in 2021.

According to a report by the Brookings Institution:

Nowhere are the UNRWA cuts more acute than in the Gaza Strip, where about two million souls inhabit a tiny area twice the size of Washington, D.C. that few can gain permission to leave. There, UNRWA provides services to 1.3 million people, spending about 40 percent of its overall budget. Roughly 262,000 boys and girls are enrolled in 267 UNRWA schools there. Twenty-two health clinics provide for millions of patient visits a year.

In Lebanon, where the entire country is suffering from what seems to be an unprecedented economic crisis, Palestinian refugees are particularly vulnerable. According to a recent story in the Palestine Chronicle:

Not being able to obtain Lebanese citizenship, Palestinians cannot get Lebanese identity cards and therefore they cannot access social assistance and government services. To receive medical help or any other form of humanitarian aid, they need to turn to UNRWA and charities.”

As the demand for their services is rising and the costs of preparing food baskets or distributing medicines are going up, UN agencies and aid groups are struggling to cope with helping all those who need it… Not only are the living conditions there very poor but refugees receive practically no support from the state.The situation of Palestinian refugees in Lebanon was dire even before the current crisis but now, faced with meager savings, limited employment opportunities, and skyrocketing inflation, they are destitute and unable to meet their basic needs.”

While many people like to add a touch of hope when speaking about Palestine, in the current reality it is wrong to present anything but urgency. People often quote polls that show that public opinion has changed, that young American Jews feel this way or that way about Israel and about Palestine. None of that is helping the people in Jerusalem’s Sheikh Jarrah neighborhood. It does not help the Palestinians in the Naqab, where 11,000 homes were demolished in a few short years, and who are now being attacked by militarized police units for saying “Enough!” It does not help the people in Gaza.

Optimism is good but it cannot take the place of urgency. Palestine is burning; it is being overrun by an armed, violent, racist and ruthless regime that was democratically elected by the Israeli people. Israelis either cheer it on or sit idly by as the massive war machine they put in power destroys everything in its path. It is time for unprecedented, original, bold action that will stop the Zionist killing maching in its tracks and force change in Palestine.

In an interview I had recently published with Dr. Ghada Karmi, Dr. Karmi said “I don’t want to hear about how nice things are. Why don’t you tell me why I can’t go home.” The dialogue industry promotes fake, feel-good exchanges between Israelis and Palestinians, which in turn are designed to create the illusion that there is hope. As though all that is needed is for us to sit together and get to know one another because deep down inside we are all well-meaning people. This is precisely what Dr. Karmi is talking about when she says she doesn’t want to hear “how nice things are.”

At the end of all the meetings, camps and weekend retreats, Israelis return to their privileged lives and the Palestinians to their reality of constant oppression. Israelis continue to serve in the military in all of its ugly forms, as reservists or professionals, and Palestinians return to the camps and villages where they live with targets marked on their backs.

The dialogue phenomenon tries to cover up the fact that millions of Palestinians are displaced and that despair is all that life has to offer them. But it provides no hope, no solution, only a guarantee that things will continue to get worse for Palestinians.

As the saying goes, if you’re not mad – infuriated, actually – then you’re not paying attention.