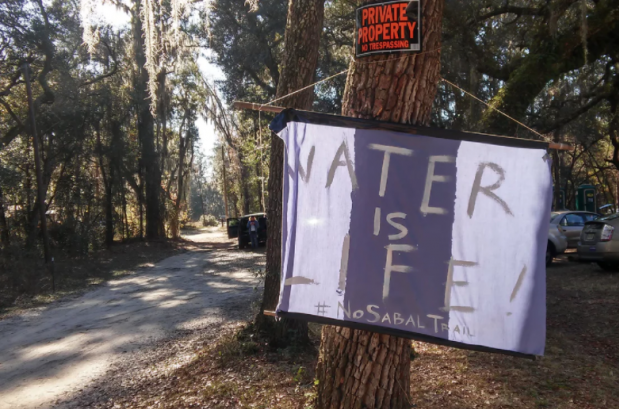 Above Photo:  Opponents of the Sabal Trail pipeline say it is not only harming the natural beauty of the Suwannee river but also doing irreversible environmental damage. Photograph: Richard Luscombe for the Guardian

At first glance the quiet town of Live Oak seems an unlikely venue for a stand against Big Energy. But in recent weeks it’s become a centre of opposition

A north Florida river that attracted the state’s first tourists a century before Walt Disney’s famous cartoon mouse is emerging at the centre of a fight against a contentious 515-mile natural gas pipeline that many are calling America’s next Standing Rock.

One section of the so-called Sabal Trail pipeline is being laid beneath the crystal waters of the Suwannee river, whose pure mineral springs were once fabled to cure anything from marital strife to gout.

Today, the abandoned stone bathhouse at Suwannee springs is a crumbling ruin, and the four hotels that once stood here, the last of which burned down in 1925, are long consigned to history.

The Suwannee river itself though is currently a scene of ongoing conflict amid the opposition to a $3.2bn pipeline designed to carry a billion cubic feet of natural gas daily through Alabama and Georgia to power plants in Florida upon its scheduled completion later this year.

At first glance, the quiet town of Live Oak, with a population of fewer than 7,000, seems an unlikely venue for such a stand against big energy. But in recent weeks a sizeable woodland protest camp has grown on the banks of the Suwannee and a number of non-violent direct actions have taken place, including one last week that temporarily halted construction and resulted in eight arrests.

Opponents say the building of the pipeline is harming not only the natural beauty of places such as the Suwannee, but irreversibly damaging sensitive environmental and culturally important areas in all three states, and threatening the supply of clean drinking water for millions.

“This is our land and our water, not theirs,” says John Quarterman, president of the WWALS Watershed Coalition that advocates for the conservation of five rivers in Georgia and Florida, including the Suwannee. “We can’t just sit here and let them come through here. We have to do something about it.”

In these parts of northern Florida, as in much of the rest of the state, the karst bedrock being drilled for the pipeline is a fragile and porous limestone.

Campaigners say that drilling has already resulted in sinkholes forming at several sites, and claim to have evidence of inadequate construction practices, including photographs from the air appearing to show the leaking of drilling mud into Georgia’s Withlacoochee river from a frac-out.

The consortium of companies behind the project, Spectra Energy of Houston, NextEra Energy of Juno Beach (the parent company of Florida Power and Light) and Duke Energy of Charlotte, North Carolina, insist that stringent safety measures are in place and that the threat to the environment is minimal. Drilling the pipeline, they say, creates a much smaller construction footprint than highways, railroads and water mains.

We can’t just sit here and let them come through here. We have to do something about it

But opponents claim Spectra in particular has had issues around its safety record, pointing to an explosion caused by a rupture of a natural gas pipeline across the Arkansas river in 2015; a pipeline explosion near its Nig creek compressor station in British Colombia in 2012 and documented regulatory fines of more than $650,000 for various environmental violations since 2010. Not least of the campaigners’ worries is the possible threat to the underground Floridan aquifer system that provides drinking water for about 10 million people, according to the US Geological Survey.

Environmental impact studies and an independent hydro-geological report commissioned respectively by the Sierra Club of Florida and a Native American clan leader warn of the risk of “catastrophic collapse” of parts of the cave system essential to the free flow and purity of water through the aquifer.

Sabal Trail Transmission LLC, the entity set up by the three energy companies to run the project, says campaigners’ fears are unfounded. “Sabal Trail will not significantly impact karst terrain, springs or the Floridan aquifer with its construction or operations,” Andrea Grover, the company’s director of stakeholder outreach, wrote in written statements to the Guardian.

The pipeline, she said, was needed to upgrade Florida’s “fully or near-fully subscribed” natural gas transmission infrastructure and its route and construction techniques were determined, after a lengthy consultation period, to “avoid, minimize or mitigate impacts”.

A massive social media campaign on Facebook and Twitter using the hashtag #StopSabalTrail has been set up to complement protest efforts on the ground, and organisers say a light is being shone in dark corners of the project that otherwise might have escaped scrutiny.

“Until now these companies got away with it because they tucked it in these tiny Suwannee places like this and didn’t tell anyone,” says Josh Michener of Twin Falls, Idaho, one of several residents of the Sacred Water campsite who spent weeks in the fall protesting at Standing Rock.

“But the technology, the awareness, makes it much easier for people to know what’s going on. You can say it’s futile, this is a pointless place to be, just a bunch of hippies in the woods. But it’s not just about Florida. You can find a majestic point anywhere in the world and say it’s worth saving but it’s really the fight against these companies. That’s what makes it universal.”

There are other parallels to the campaign that halted the Dakota Access pipeline(DAPL) in December, particularly the involvement of the native American community. Last week the Seminole Tribe of North Florida said it was opening four “heartland” protest camps along the pipeline’s planned route in Levy County’s Goethe Forest and in the towns of Bronson, Williston and Dunnellon, where the pipe will lie less than 3,000ft from a high school.

The tribe is encouraging campers to act as “water protectors”, to observe construction and document and report any violations they witness.

Although the pipeline does not cross Native American reservations, as DAPL did in North Dakota, Florida’s indigenous tribes lament the impact on lands it sees as culturally sensitive, such as those around Fort Drum creek in central Florida with histories dating back to the Seminole wars of the 1800s.

“You just weep. You bleed and feel pain and you cry, you can’t really do anything because of all the big machines, like an army coming through destroying your people,” said Bobby C Billie, a sixth-generation Seminole and clan leader of the Council of the Original Miccosukee Simanolee Nation Aboriginal Peoples.

“Most things disappear because of development, highways and … [stores] and big gas stations; we’re losing our way of life. These are God’s creations, the animals, the fish, the water, natural areas just disappearing. The American people came over a hundred years ago, taking our way of life and our food, and they’re still doing it today.”

Billie has been a vocal critic of the pipeline and helped lead a rally at the state capitol in Tallahassee on 23 January, at which protesters attempted to persuade authorities including FERC, the army corps of engineers and the state department of environmental protection to revoke Sabal Trail’s existing permits.

They say they will present evidence of alleged problems by contractors, for example being found out of their right of way at Okapilco creek in Georgia by the state’s department of environmental protection last month, or failing to erect required silt fences.

Debra Johnson, who remembers playing with her siblings in the springs of the Suwannee river as a child, was one of several who spoke passionately against the pipeline at a well-attended public meeting in Live Oak last week hosted by the WWALS coalition. Johnson’s family owns the riverside land on which the Sacred Water camp is located and laments what she sees as the fossil fuel industry’s attitude of “profit over planet”.

“Water is life,” she says. “What are we going to do when it’s too late? You can’t eat money, you can’t drink money and you certainly can’t breathe money.”

Shannon Larsen, another activist, told the Guardian she and Billie watched in tears as construction crews cleared Fort Drum creek. “This was a beautiful, magnificent forested creek with ancient trees flourishing with animals and birds and vegetation,” she said. “The creek will never be able to reestablish itself as a forested creek, the whole ecology has been changed.”

Grover insisted construction “closely adhered to all applicable environmental standards,” was required to restore affected land, and that Sabal Trail “is dedicated to the safe, reliable operation of facilities and the protection of the public, the environment and our employees”.

The drilling mud from the Withlacoochee frac-out, she said, “is primarily a mixture of naturally occurring bentonite clay and water. There was never any danger to human health or safety, and no harm to the environment.”

The claims, however, cut little ice with Quarterman, who believes drilling for the pipeline is producing more sinkholes, which could lead to pipeline failure.

“It’s not just one or two places, they’re causing more of them. We can see this from the air,” he said.

The bottom line, he says, is that the Sabal Trail pipeline is a risky venture that is neither wanted nor needed, pointing out that FPL’s own 10-year plan published last year states that Florida does not need any new electricity resource until 2024.