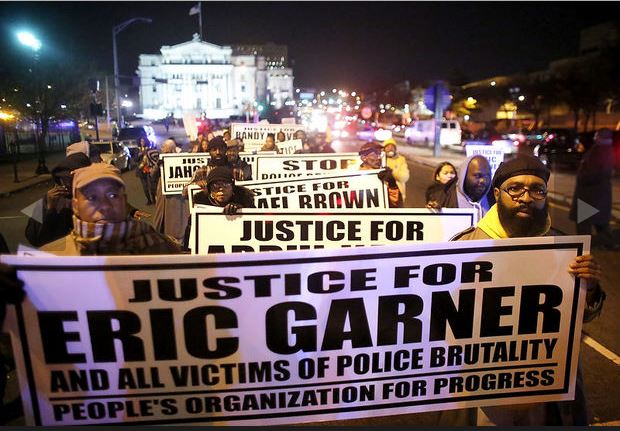 Why Protest Someone Who Agrees With You? Here’s Why.

Whether it’s taking over government offices, or shutting down Wall Street or infiltrating TV shows to force a confrontation, sometimes political protests can be really inconvenient. And at times they target powerful people who already agree with the protestors! What’s the point of that?

Well, sometimes if you have a problem, you can work hand-in-hand with institutions that can help, through lobbying, and petitions, and meetings and fancy dinners.

But that doesn’t always work. Powerful people don’t like to talk about issues that make them uncomfortable.

For example, in 1982, a reporter asked Reagan’s press secretary if the president was aware of the AIDS epidemic. He answered, “I don’t have it. Do you?” And then he laughed, and moved on.

Problems that matter to people in the margins can get laughed at, or forgotten or set aside for more palatable topics. The issues get stuck. Getting them unstuck requires a large amount of force. It takes an uncomfortable action to make people talk about uncomfortable topics.

The Reagan White House was laughing about AIDS for most of the 80s, so ACT UP forced them to take it more seriously by shutting down Wall Street to demand better treatment and a national AIDS policy. Within months, Surgeon General C. Everett Koop sent a mailer about AIDS to every home in America. It was the largest mailing in history.

Even when powerful people agree with protestors, sometimes important problems get marginalized. It still takes a disruptive push to bring a topic from the margins to the center of everyone’s attention.

That’s why protestors chained themselves to the White House fence to protest Don’t Ask Don’t Tell. Obama had been saying for years that the military ban should be repealed but it wasn’t happening. So a group that included Dan Choi took action. Now obviously, one disruptive protest doesn’t solve a problem all by itself. But it keeps pushing the conversation. Centering the issue. Keeping it moving so it never gets stuck. Within a year of that protest, DADT repeal was signed into law.

Rude, uncomfortable, disobedient protests are particularly effective for people in disadvantaged positions. We tend to talk about Stonewall as the beginning of the modern LGBT liberation movement. But there was a riot at Compton’s Cafeteria in San Francisco three years earlier. Trans people had endured widespread harassment for years, and when a cop tried to arrest a trans woman just for being out in public, they finally fought back in a violent multi-day protest. It was messy and scary. But immediately afterwards, the San Francisco Police Department created COG, the first known trans support group in the country, along with the country’s first trans-focused social service agency.

Compare that to the polite rallies at the time. During the ’60s, Frank Kameny organized some very professional, respectable protests in Washington DC. And although they formed the basis of later actions, you’ve probably never heard of them — and neither did people at the time. So Frank stepped up his tactics. In 1970, he led a protest against the American Psychiatric Association’s annual meeting, asking the APA to stop treating homosexuality as a mental illness. The next year, he crashed the meeting, grabbed the microphone and issued demands. That’s when things changed. The next year, the APA invited him to speak. And the year after that, the APA removed homosexuality from the DSM.

It would be nice if there was a polite, palatable way for people who have limited access to power to affect change without hurting anyone’s feelings. But when people who do have access to power aren’t willing to talk about an important issue, and that issue is stuck, it’s never going to get any momentum unless you give it a strong shove.

It’s what we’ve seen over the last few decades with LGBT liberation. It’s what we saw with Occupy Wall Street. It’s what we see with Black Lives Matter. It even goes back to suffrage, when women were beaten and killed when they tried to force their way into government buildings. Suffragettes were accused of “militant hysteria.” Woodrow Wilson called them “obnoxious.” But as Laurel Thatcher Ulrich wrote, “well-behaved women seldom make history.”

If you’re a member of any group that’s been shut out, pushed aside, forgotten or made fun of, you’ll never change anything by following the rules. The rules are what marginalized you in the first place. You’ve got to break a few of them if you want to make history. And more importantly, change the future.