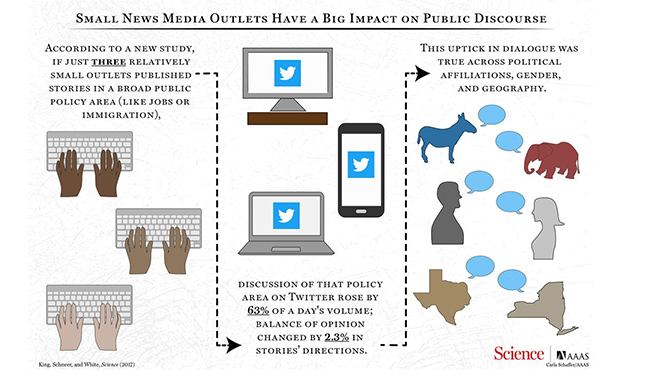 Why Science Says You Should Be Reading Small Independent Media

Above Photo: The five-year-long study published this week in Science shows that even small independent news outlets can have a dramatic effect on the content of national conversation.

While trust in corporate news has gone down over the past few years, trust in independent news is strong.

Google, Facebook, and Twitter were hauled in front of Congress last week to explain how Russian bots were able to spread fake news on their platforms. The concern—and a very real one—is that these bots and fake news sites had a significant impact on the 2016 election.

A better way to secure a media system that works for democracy is to strengthen independent news outlets.

Fighting fake news, however, is not the only or best way to ensure that our content ecosystem prioritizes real news. This week, a groundbreaking article in Science proves that a better way to secure a media system that works for democracy is to strengthen independent news outlets.

The five-year-long study published this week in Science, directed by Harvard professor Gary King and supported in part by Voqal, shows that even small independent news outlets can have a dramatic effect on the content of national conversation. King, along with his now former graduate students Ben Schneer and Ariel White, found that if just three outlets write about a particular major national policy topic—such as jobs, the environment, or immigration—discussion of that topic across social media rose by as much as 62.7 percent of a day’s volume, distributed over the week.

Over 60 percent of the participating outlets were members of the Media Consortium, the organization I direct. The Media Consortium outlets that had the highest participation rates in the Science study, in order: Truthout, In These Times, Bitch Media, The Progressive, Earth Island Journal, Feministing, Generation Progress, Ms. Magazine, and YES! Magazine. The median outlet size was The Progressive, with about 50,000 subscribers.

Individually, none of them is a New York Times or CNN. In fact, too often, philanthropic foundations refuse to support these outlets because they are “too small” and “don’t have enough impact.” What this Science study proves is that when independent news outlets work together to co-publish stories on the same topic in the same week, they can have a mighty effect.

But independent media followers are not just thumbs-up people. They not only comment and repost on social, but they donate to these organizations and attend events in real life. These are people who want to participate in national conversations about topics they care about, from immigration to climate change to school reform. So it makes sense that they would push those conversations on social.

Second, studies coming out over the past five years have demonstrated that collective efforts make a bigger impact than stand-alone efforts. When even small outlets join together, they can have an effect larger than any of them would individually. We’ve seen that recently with the publication of the Panama Papers and other large-scale collaborations.

Trust matters on platforms that too often provide space for fake news.
Our outlets implicitly understood those effects: The Media Consortium was founded in order to build a collaborative network. In fact, when the researchers started working with us to figure out what they could randomize, it was we who suggested the experiment be built upon randomized timing of collaborative publication.

Finally, we have faith in the American people. Yes, everyone likes a cute cat photo or a bit of salacious gossip. But people care at a very fundamental level about the schools their kids attend, about their own reproductive choices, about their communities, neighbors, and friends. They hunger for stories that impact their everyday lives. And those are the stories they will talk about and share. In fact, they will increase their sharing of stories like these by 62.7 percent when the stories originate on outlets they trust.

Trust matters on platforms that too often provide space for fake news. Increasingly, people will look at what outlet is providing them with that news. While trust in corporate news has gone down over the past few years, trust in independent news is strong.

The implication of the Science study is simple: If we want to foster robust conversations about national policy, we need to continue to support independent news outlets.