Why Shell Lost The Arctic

Royal Dutch Shell announced this morning that it would be abandoning its exploration program in the U.S. offshore Arctic for the “foreseeable future” (see our response here). After more than 7 billion dollars and many seasons of almost unbelievable mishaps – Shell made the call along with an announcement that this season’s efforts had failed to turn up any worthwhile find.

This is a huge win for the climate. We know that Arctic oil is incompatible with a safe global climate. Big oil’s high cost, high risk hunt for unburnable carbon at the ends of the earth was indicative of just how far the industry is willing to go to cling to last century’s dirty energy.

So what went right for those opposing Shell’s arctic drilling? Shell has many drilling seasons under its belt where it did not uncover any huge Arctic reserves, but for some reason this time, enough was enough and the company is calling it quits.

Here are a few of our thoughts on other factors at play:

Shell’s efforts to exploit the U.S. Arctic ocean struck a chord with millions across the continent and the world. The pristine Arctic Ocean is already bearing the brunt of climate impacts, and they very idea that the melting Arctic sea ice could serve as an invitation to Big Oil to hunt for more oil was simply too much for concerned citizens to tolerate. 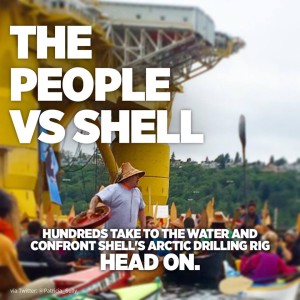 People power changed the game when it comes to Shell in the Arctic. Ranging from extraordinary grassroots opposition, to forcing the biggest names in U.S. politics to oppose the projects, to hitting Shell hard at home with legal victories in the Netherlands, Shell has been teetering back footed all year.

This is a win for people power, and a testament to the combined impact of pressure from all sides.

As Greenpeace UK’s executive director, John Sauven, said today, “Big oil has sustained an unmitigated defeat. They had a budget of billions, we had a movement of millions. For three years we faced them down, and the people won.”

Here are key ways in which people power tipped the scales:

Of course the precipitous drop in global oil prices has had a huge impact on projects the world over – in particular the high cost ones that were counting on prices that forecasters say we won’t see again for well over a decade (if ever). Arctic oil is the poster child for high cost, high risk exploration and as our analysis has shown, Shell was leading the pack in capital expenditure in the hunt for high cost (unburnable) carbon.

The low oil price hit Shell hard when it came to justifying their Arctic program. But at the same time, it might be just the “out” Shell needed to pull out of a program that has been a PR disaster from the beginning for the company.

3. Real risks in the Arctic:

Of course, as Shell knows all too well, the risks of Arctic oil exploration are incredibly high. Unpredictable weather, moving sea ice, devastating storms – the region is known as some of the most difficult waters in the world. Shell has already spent hundreds of millions, and ample political capital dealing with mishap after mishap in its Arctic program.

U.S. government studies estimated the risk of a major spill to be some 75% over the course of a project’s life span.

These operational risks were a focal point of public concern over the years – no one wanted to see another disaster like the Exxon Valdez or the DeepWater Horizon, especially in conditions that would make it infinitely more difficult to stop, slow, and clean-up.

4. The BG deal and Big Oil’s next spin game:

Before you start to feel sorry for Shell, they are not down and out yet. In fact (as we outline here), they are moving swiftly on to industry’s next spin game: blame coal and the highest carbon oils and move onto gas.

Shell’s acquisition of BG (a large gas company) early in the year was a clear signal that industry is gearing up to make a case that gas is the lower-carbon solution to our energy needs.Of course,science has shown that if there was ever a window where gas could serve as a transition fuel, it has closed. But this is unlikely to stop Big Oil from making coal the target, and “clean oil and gas” the solution.

This is an industry that is not going to give up without a fight.Even as part of this withdrawal announcement, Shell warned that they aren’t giving up on the “strategic importance” of the region. They are playing the long game and we must too.

But one thing is clear today, and that is that it is a great day for the climate and the Arctic and for the people across the continent and the world that have worked so hard to protect it. From First Nations and communities on the front lines of climate change in Alaska, to Kayaktavists in Seattle and Portland – this story has a happy ending in no small part because of people power.

We are one step closer to a cleaner, safer, just energy and climate future. The fossil fuel industry will not give up easily, but they are fighting a losing battle.