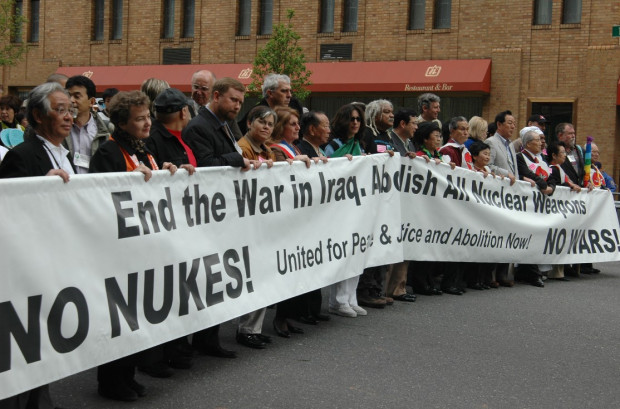 Why So Little Protest Against Today’s Threats of Nuclear War?

In recent weeks, the people of the world have been treated to yet another display of the kind of nuclear insanity that has broken out periodically ever since 1945 and the dawn of the nuclear era.

On April 11, Donald Trump, irked by North Korea’s continued tests of nuclear weapons and missiles, tweeted that “North Korea is looking for trouble.” If China does not “help,” then “we will solve the problem without them.” North Korean leader Kim Jong Un responded by announcing that, in the event of a U.S. military attack, his country would not scruple at launching a nuclear strike at U.S. forces. In turn, Trump declared: “We are sending an armada, very powerful. We have submarines, very powerful, far more powerful than the aircraft carrier. We have the best military people on earth.” 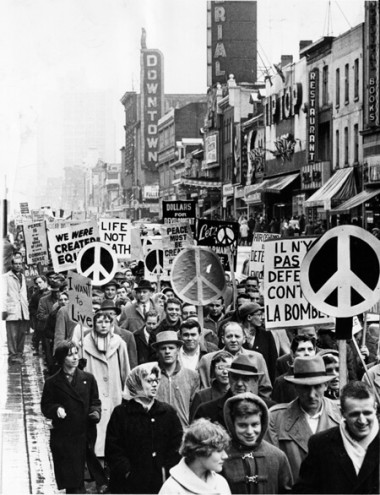 During the following days, the governments of both nuclear-armed nations escalated their threats. Dispatched to South Korea, U.S. Vice President Mike Pence declared that “the era of strategic patience is over,” and warned: “All options are on the table.” Not to be outdone, North Korea’s deputy representative to the United Nations told a press conference that “thermonuclear war may break out at any moment.” Any missile or nuclear strike by the United States would be responded to “in kind.” Several days later, the North Korean government warned of a “super-mighty preemptive strike” that would reduce U.S. military forces in South Korea and on the U.S. mainland “to ashes.” The United States and its allies, said the official statement, “should not mess with us.”

Curiously, this North Korean statement echoed the Trump promise during his presidential campaign that he would build a U.S. military machine “so big, powerful, and strong that no one will mess with us.” The fact that both Trump and Kim are being “messed with” despite their possession of very powerful armed forces, including nuclear weapons, seems to have eluded both men, who continue their deadly game of nuclear threat and bluster.

And what is the response of the public to these two erratic government leaders behaving in this reckless fashion and threatening war, including nuclear war? It is remarkably subdued. People read about the situation in newspapers or watch it on the television news, while comedians joke about the madness of it all. Oh, yes, peace and disarmament organizations condemn the escalating military confrontation and outline reasonable diplomatic alternatives. But such organizations are unable to mobilize the vast numbers of people around the world necessary to shake some sense into these overwrought government officials.

The situation was very different in the 1980s, when organizations like the Nuclear Weapons Freeze Campaign (in the United States), the Campaign for Nuclear Disarmament (in Britain), and similar groups around the world were able to engage millions of people in protest against the nuclear recklessness of the U.S. and Soviet governments―protest that played a key role in curbing the nuclear arms race and preventing nuclear war.

So why is there so little public protest today?

One factor is certainly the public’s preoccupation with other important issues, among them climate change, immigration, terrorism, criminal justice, civil liberties, and economic inequality.

Another appears to be a sense of fatalism. Many people believe that Kim and Trump are too irrational to respond to reason and too autocratic to give way to public pressure.

Yet another factor is the belief of Americans and Europeans that their countries are safe from a North Korean attack. Yes, many people will die in a new Korean War, especially one fought with nuclear weapons, but they will be “only” Koreans.

In addition, many people credit the absence of nuclear war since 1945 to nuclear deterrence. Thus, they assume that nuclear-armed nations will not fight a nuclear war among themselves.

Finally―and perhaps most significantly―people are reluctant to think about nuclear war. After all, it means death and destruction at an unbearable level of horror. Therefore, it’s much easier to simply forget about it.

Of course, even if these factors explain the public’s passivity in the face of a looming nuclear catastrophe, they do not justify it. After all, people can concern themselves with more than one issue at a time, public officials are often more malleable than assumed, accepting the mass slaughter of Koreans is unconscionable, and if nuclear deterrence really worked, the U.S. government would be far less worried about other nations (including North Korea) developing nuclear weapons. Also, problems―including the problem posed by nuclear weapons―do not simply disappear when people ignore them.

It would be a terrible thing if it takes a disastrous nuclear war between the United States and North Korea to convince people that nuclear war is simply unacceptable. The atomic bombing of Hiroshima and Nagasaki should already have convinced us of that.

Dr. Lawrence Wittner (http://www.lawrenceswittner.com) is Professor of History emeritus at SUNY/Albany. He is the author of Confronting the Bomb (Stanford University Press).