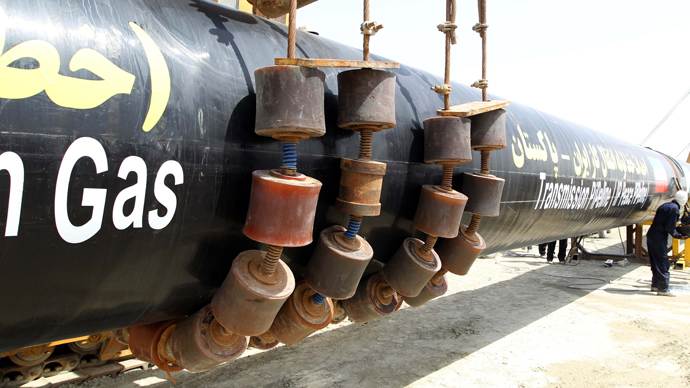 Why Syria? A Story Of Competing Pipelines

[*Disclaimer: The authenticity of the Britam email has been questioned. We are posting this article for the information it provides about the dueling pipelines in the region]

In the summer of 2011, just weeks after civil war broke out in Syria, the Tehran Times released a report entitled, Iran, Iraq, Syria Sign Major Gas Pipeline Deal. The report provided details on how Iran planned to export its vast natural gas reserves to Europe through a pipeline that traversed both Iraq and Syria. This Iran-Iraq-Syria pipeline would be the largest gas pipeline in the Middle East and would span from Iran’s gas-rich South Pars field to the Mediterranean coastline in Lebanon, via Iraq and Syria.

But the pipeline won’t stop there.

The agreement calls for the construction of an underwater pipeline under the Mediterranean Sea stretching from Lebanon to Greece to deliver Iranian gas to energy-hungry European nations.

The 6,000 kilometer pipeline, which has a massive price tag of $10 billion, will have an estimated capacity of 100-120 million cubic feet of gas per day, with a projected completion date sometime near 2018. As of this writing, the construction of this proposed pipeline has not begun and the question of who will finance the project has not been addressed. However, in July 2013, leaders from Syria, Iran, and Iraq met to sign a preliminary agreement on the pipeline with the hopes of finalizing the deal by the end of the year.

Like its Turkish neighbor, Syria’s geographic location on the Mediterranean Sea makes it an obvious export center for landlocked oil producers within the greater Middle East seeking to export their oil and gas reserves to European markets. For this reason, Syria’s strategic location, and its warm water port on the Mediterranean, have placed it near the center of a major effort by Western nations to pump cheap Middle East gas supplies to Europe and beyond. Syria is already part of a Western-ordained gas pipeline that spans from Egypt to Homs. This pipeline, known as the Arab Gas Pipeline, was originally planned to continue traveling north of Homs up into Turkey. From there, it can be piped into Europe. The major players of this Western approved pipeline include Saudi Arabia and Qatar, among other Gulf nations.

Most Arabs view the Islamic Pipeline as a Shi’ite pipeline serving Shi’ite interests. After all, it originates in Shi’ite Iran, passes through Shi’ite Iraq, and flows into Shi’ite controlled Syria. Therefore, the Sunni-dominated Gulf nations have both an economic and to a lesser extent, a religious reason, for stopping the Islamic Pipeline from becoming a reality. So far, the Gulf nations have violently opposed Syria’s adoption of the Islamic Pipeline by arming opposition fighters within Syria in order to destabilize the nation. While the ultimate goal is to topple the Assad regime, these hopes appear to be diminishing as Assad remains strong and defiant in the face of recent opposition.

Despite his firm grip on power, Syrian President Bashar Al-Assad is opposed by many powerful actors within the Middle East, including Israel, Jordan, Turkey, Qatar, and Saudi Arabia. Al Qaeda also strongly opposes the Assad government and has joined other rebel factions in an effort to overthrow Assad and to install a more Sunni-friendly (and perhaps more importantly, a Western-friendly) government.

This week, it appears that the long planned U.S.-led war in Syria may finally commence. For nearly two decades, Western nations have been plotting an overthrow of the Syrian government with the aim of replacing the hostile regime with a new “democratic” government that is friendly to Western interests in the region.

The official Western narrative against Syria goes something like this:

The Syrian government has abused basic human rights, maintains deep ties with rogue regimes like Iran and North Korea, and just recently launched a chemical weapons strike on hundreds of its own people. In addition to killing its own people, the Assad regime is serving to destabilize an already unstable Middle East. Assad must go…

According to most reports, the U.S., Britain, and France are preparing for a strike against numerous key targets within Syria this week.

British Prime Minister, David Cameron, is calling for war and has recalled Parliament this week to discuss a military response against Syria.

French President, Francois Hollande, has increased its support for the Syrian rebels and has said that France is “ready to punish” whoever was responsible for the recent chemical weapons attack.

The Arab League has blamed the chemical weapons attacks on the Syrian government and is calling for United Nations intervention.

U.S. Secretary of State, John Kerry, has said that the evidence of a chemical weapons attack in Syria is “undeniable.”

After providing the White House with “all options for all contingencies,” U.S. Secretary of Defense,Chuck Hagel, has stated that U.S. forces are “ready” to launch a strike against Syria.

Of course, all of this is mere propaganda, as the U.S. has long planned to topple Syria.

First, consider these words from U.S. General Wesley Clark. Clark, who is clearly a globalist, admitted that the U.S. had already made the decision to invade Syria as early as 2001.

Additionally, more damning evidence of the West’s intention to launch a pre-emptive strike on Syria was revealed in an explosive report released by the UK’s Daily Mail on January 2013. Below is a snippet of the report, which was entitled, U.S. ‘backed plan to launch chemical weapon attack on Syria and blame it on Assad’s regime’ :

Leaked emails have allegedly proved that the White House gave the green light to a chemical weapons attack in Syria that could be blamed on Assad’s regime and in turn, spur international military action in the devastated country. A report released on Monday contains an email exchange between two senior officials at British-based contractor Britam Defence where a scheme ‘approved by Washington’ is outlined explaining that Qatar would fund rebel forces in Syria to use chemical weapons.

Here’s the text of the email, according to the report:

‘Phil… We’ve got a new offer. It’s about Syria again. Qataris propose an attractive deal and swear that the idea is approved by Washington.

‘We’ll have to deliver a CW to Homs, a Soviet origin g-shell from Libya similar to those that Assad should have. ‘They want us to deploy our Ukrainian personnel that should speak Russian and make a video record.

‘Frankly, I don’t think it’s a good idea but the sums proposed are enormous.

Below is an screenshot of the email. (Click it to enlarge)

(As an interesting side note, the Daily Mail yanked this story from their website just a few weeks ago, perhaps in anticipation of the recent chemical weapons strike. However, FTMDaily was able to locate the story through the use of archive.org.)

Of course, the U.S., France, and Britain are scolding the Syrian government for allegedly launching the chemical weapons strike against their own people. But so far, no evidence has emerged linking the Assad regime to a chemical weapons strike. Meanwhile, both the Syrian and Russian governments have blamed the Syrian rebels for launching the attack, calling it a false flag operation designed to be used as a pretext to war. So far, the only hard evidence that exists is the above email which shows intent on the part of the U.S., not Syria.

In addition to Russia, Iran has also firmly opposed intervention into Syria. Once you grasp the regional energy pipeline politics which dominate the region, Iran’s interests in Syria are obvious.

But what about Russia? Why are they choosing to side with Syria despite the massive propaganda push by the West? Russia’s economy is predominantly based upon its enormous energy supplies. Much of Europe is dependent upon Russian oil and gas, and this dependency is growing. Russia has the world’s largest reserves of natural gas. Which country has the second largest reserves? Iran.

Iran, however, is isolated with no current ability to export its vast energy supplies to Europe. Russia has its eye on the potential profits of bringing Iranian oil and gas online for Europe. For this reason, (among a myriad of others) it has sought to solidify its relations with Iran. Of course, the most direct route for moving Iran’s energy supplies to Europe is right through the heart of Iraq and into Syria. So, it appears that Russia’s alliance with Syria has less to do with Syria and much more to do with the Iranian gas that may soon flow into Syria.

In the end, these conflicts in the Middle East are all about controlling the flow of energy resources.