Due to the recent accidental leak of information, we now know that there are charges against publisher and journalist, Julian Assange, as well as a grand jury indictment. Many hold the belief that extradition of Assange to the United States would be beneficial to both parties. However, this is not true.

Since March of 2018, Assange’s voice has not been heard due to a gag order by President Moreno of Ecuador. For 8 months, he was in solitary confinement without access to internet, phones or visitors. Though the gag order has been essentially lightened, the protocol put in place is intended to strangle Assange. Why was this done by Ecuador who gave him political asylum?

The Trump administration has pressured Ecuador to turn over Assange using a 5 billion dollar loan and military presence to coerce them. See here. I believe this comes also from the CIA. Under former CIA head, Mike Pompeo, the Vault7 files were released. At that time, Pompeo referred to Wikileaks and it’s founder as a “hostile intelligence agency” similar to Hamas.

Regardless of why, being charged with espionage, government theft and coercion would lead to Assange spending the rest of his life in Gitmo  or worse yet, receiving the death penalty for practicing free press and free speech. This sets a precedent for all independent journalists who publish the truth about corrupt government and corporations and violates the United States Constitution. It also violates international law.

Extradition can only lead to the torture of Assange. After all, look at what they did to Chelsea Manning while he was in prison. The Stratfor emails show the intentions of the U.S. government towards Assange as seen velow: 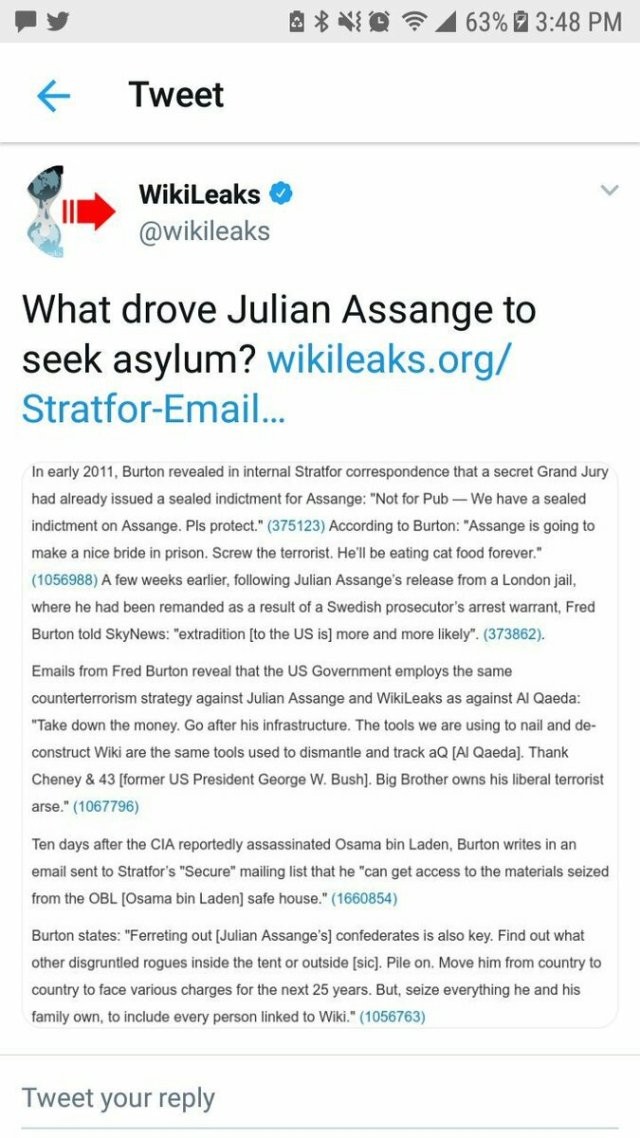 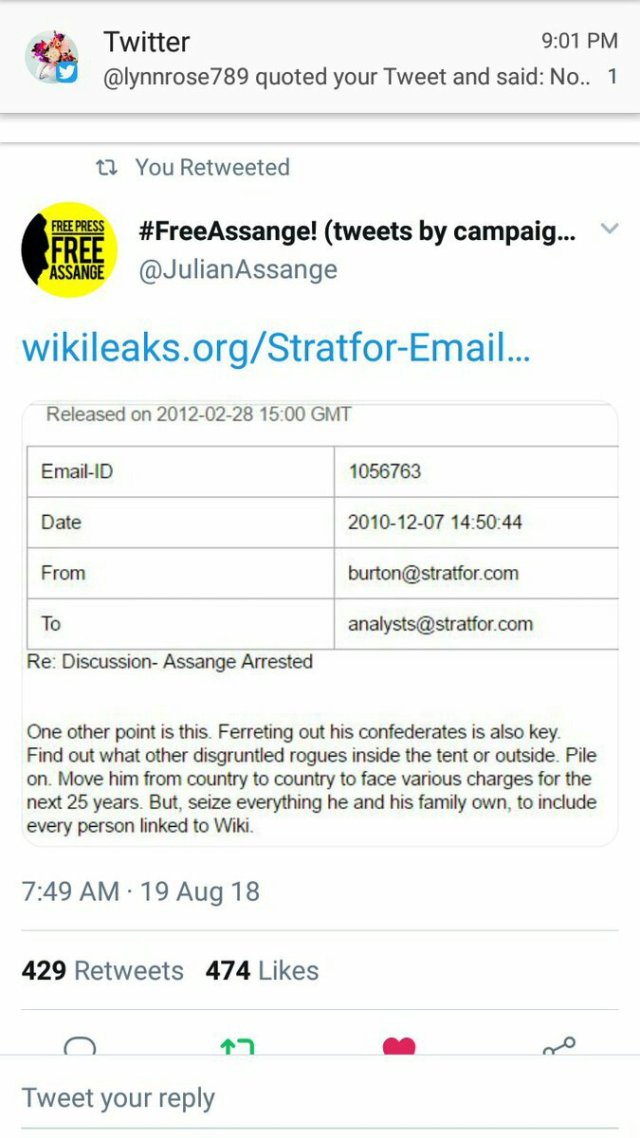 Nothing good can come from this. While I was attempting to write this article, I decided to contact several high profile people and ask for a short statement from them as to why they feel he shouldn’t be extradited. Here are their statements:

“The threats to Julian Assange are very real. We now know there is a secret indictment of Assange. We do not know the details but expect a prosecution for espionage in the “Rocket Docket” in Alexandria, Virginia, in the Fourth Circuit where national security cases are heard. The jury in Alexandria will be made up of intelligence officials, Pentagon workers, military contractors and their spouses. He will not get a fair trial. The movement must do all it can to stand with Julian and demand he not be prosecuted. Being an editor and publisher of national security issues and war crimes is not a crime — it is the duty of any journalist and is protected by the First Amendment.”

Kevin Zeese, co-director of Popular Resistance. Zeese is a public interest lawyer and advocate for freedom of the press

“I believe if Julian Assange is ever in UK custody, he will gain his long overdue freedom. There are too many laws the UK would break to extradite an innocent man. However’ if he was extradited it would be not only be one of the biggest travesties of justice, but the framework to silence newspapers and publishers around the world. The New York Times would be next on the list to stifle the First Amendment.”

From John Kiriakou’s article which he suggested using for this
article, seen here:

“The issue here is that it is highly unusual – unprecedented, even – for a foreign national (Assange is Australian) to be charged with espionage when he did not steal the information. He was simply provided the information, which he then made public. Assange says that he was just a journalist doing his job, and no administration has ever charged a journalist with espionage for doing his job.

Third, I have long predicted that Assange would face Judge Leonie Brinkema were he to be charged in the Eastern District. Brinkema handled my case, as well as CIA whistleblower Jeffrey Sterling’s. She also has reserved the Ed Snowden case for herself. Brinkema is a hanging judge. She was appointed to the federal bench by Ronald Reagan after serving as a federal prosecutor. She was then elevated from administrative judge to trial judge by Bill Clinton, under the patronage of former Republican senator John Warner.”

In other words, Assange would face a kangaroo court already decided in the government’s favor. We cannot allow the extradition of Julian Assange period. We must protect our freedom of press and speech. We must fight!