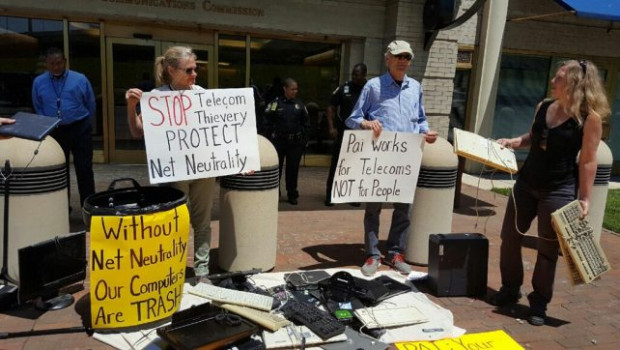 Why The Fight To Save The Internet Matters

Above Photo: Net Neutrality advocates smash computers in front of the Federal Communications Commission on May 16, 2017./Photo courtesy of Popular Resistance

By being protected under Title II of the Telecommunications act of 1934, everyone has equal access to it. This means that no one can have priority access to internet information, no one can arbitrarily control the type of information that is sent (as long as such information doesn’t break the law), and no one can limit the transmission speed.

Net Neutrality affects everyone, because everyone depends on and uses the Internet dozens of times a day in one way or another. Whether it’s by sending a text, making a phone call, completing a transaction, visiting a web site, using a social media app, sending an email, or doing any type of electronic communication, it is over the commons of the Internet.

The Internet consists of a physical network of fiber optic cables, data centers, routers, switches, and servers working together with layers of routing software to send voice, information, and video, from a source to a user. And most everyone takes it for granted because it works quietly in the background, as a loyal servant routing our calls, messages, and data.

What the FCC chairman is proposing is to transfer the operation and control of the internet to a handful of corporations. This proposal will allow these corporations to decide what content takes priority, what speed it will allow communications to move, and who has accessibility to it.

If the internet is ceded to telecom control, it will be very difficult to reverse it. The telecoms will have the keys to the broadband, so to speak.

The telecoms are sponsoring an advertising campaign claiming they need control in order to enhance its performance. They promise not to limit access or throttle data flow, but history contradicts this claim. Since they compete with each other for market share, they inherently prioritize services in their own favor. It is next to impossible for the telecoms to both protect public information access and Net Neutrality while competing for market share.

But this issue goes much further than natural market fundamentals driven by competition. By limiting access to certain competitors and by extension, competitor web sites, they would end up limiting public access to certain web sites. The access issue will allow them to relegate free speech to an afterthought, advocates say.

Eleanor Goldstein, the host of online news progran Act Out, says that ending equal access will affect all media news programs and platforms, regardless of content.

“Telecoms will be able to make different tiers of access to the Internet affecting everything from Politico to Briebart News,” she said. “We don’t know what exactly is going to be affected because that’s up to the telecoms, but regardless of where you stand on the political spectrum, you should be for free speech.”

Last Sunday, activists picketed in front of FCC Chairman Pai’s home with a large banner reading, “Save The Internet.” A week ago Internet activists left door hangers throughout Pai’s neighborhood warning neighbors of the looming Net Neutrality battle. Several students from his neighborhood joined the picket, while several home owners came out to express support.

On Tuesday, May 16, Net activists staged a break up of old computers on the sidewalk at the FCC to demonstrate what an Internet without protections would look like. They delivered the old hardware them to Chairman Pai, drawing attention to his “break the Internet” attempts.

More actions are planned for this week, including more protests at FCC commissioner Pai’s neighborhood and additional actions at the FCC.

On May 18, the day Pai plans to announce the new Internet rules, activists plan a sit-in at the FCC.

John Oliver released a video parody of Ajit Pai last week, calling on Internet users to register their concerns with the FCC plan. He simplified access to the FCC comments site with a web short cut he named GoFCCyourself.com to take commenters directly to the hard to find location on the FCC web site.

Oliver published a video comedy skit in 2014 also spoofing FCC plans to end Net Neutrality in the first battle. His uproarious spoof drove public interest in Net Neutrality, pushing comments against telecom control to nearly 4 million, the most comments ever received over an FCC regulation.

What You Can Do To Keep Internet Access Open And Free

To help in the fight to save Net Neutrality, visit Protect Our Internet.
You may also comment directly on the FCC website about Net Neutrality here.

There are also advocacy groups working to notify the public about the stakes. Fight for the Future and Electronic Frontier Foundation have set up web sites with tools such as contacting Congress and grassroots efforts to save the Internet.